In what the Ashton-in-Makerfield, Wigan-based firm says is â€œa resounding endorsement of its coach operationâ€, it will provide RoyalConnection and CelebrityConnection services from around the UK to Southampton and Harwich for the Royal Caribbean International and Celebrity Cruises brands.

MD Mike Eaves says: â€œWe are particularly pleased to have been awarded this prestigious three-year contract in recognition of the quality of service we will bring to these cruise transfer services.

â€œWe will be working closely with Royal Caribbean Cruise Lines to drive sales out of Southampton and Harwich from 2015 onwards. For passengers it will give them the opportunity to witness the standards we have been setting during the past 23 years on our Cruiselink services to Southampton.â€

The new services also coincide with the introduction of Royal Caribbean International’s new ship Anthem of the Seas that sails from Southampton from April 2015.

In readiness for the new contract, and to service its existing 2014/15 commitments, the Eavesway fleet will initially grow from 32 to 37 vehicles with the addition this spring of a further five Van Hool TDX21A Altano coaches, to be supplied by Arriva Bus and Coach, and a Mercedes-Benz EVM X-Clusive 16-seat VIP mini coach.

Meanwhile the first of the 2015 coach intake, a Euro 6 Van Hool TDX21A Altano to Eavesway’s Cruiselink specification, has already been ordered and will be joining the 100% DDA-compliant Euro 5 coach fleet later this year.

Adam Sharp, Northern Europe Port Services Manager of Royal Caribbean Cruise Lines, says: â€œWe realise the holiday begins the moment you close the door and we wanted to make sure our partner understood this, and more importantly, could provide a service that matched that expectation.

â€œIn partnering with Eavesway Travel we know our guests will have a great start and end to their cruise with us, travelling on a fleet of young, luxurious coaches, and we look forward to building on this valuable partnership.â€

‘Proactive engagement with concessionary travel is key for bus’ 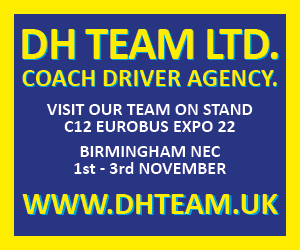