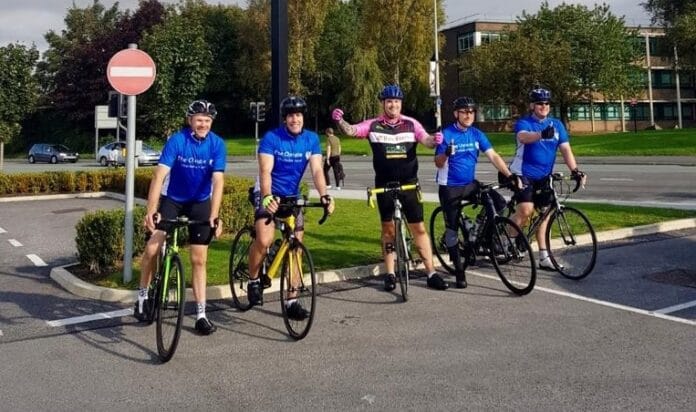 A team of cyclists from Belle Vue Manchester have raised £4,300 for new cancer research facilities at The Christie by covering 700 miles in a series of sponsored rides.

Managing Director Phil Hitchen (pictured, second left) – who was successfully treated for cancer at The Christie in 2011 – led a group of five Belle Vue team members on a ride from the operator’s premises near Stockport to Blackpool’s South Promenade and back, a round trip of 115 miles.

Belle Vue’s team of cyclists had been in training for the annual Manchester to Blackpool bike ride for The Christie. When that even was cancelled because of the coronavirus COVID-19 pandemic, they decided to undertake the journey themselves. The route took them along the A6 to Preston and then via the A583 to Blackpool.

The group included Driver Supervisor Matt Turner, who overcame leukaemia as a teenager. Riding alongside him and Phil were two of Matt’s cousins – Paul Lunt and Steve Swaine – and Phil’s close friend Craig McLean.

Matt’s cousin Jackie Rivers lost her battle against cancer a few days before the ride. The cyclists were joined in Blackpool by around 40 family members. They released 50 balloons at South Promenade in Jackie’s memory.

The Christie supplied the cyclists with vests. It will hand out certificates and medals to the riders in due course.

Meanwhile, Belle Vue drivers Craig Beavan and Anthony Myers-Jones have each chalked up 62 miles by cycling around Greater Manchester from the operator’s head office.

Says Phil: “We launched a cycle to work scheme earlier in the year. During lockdown everyone involved focused their energies on getting fit, losing weight and building stamina with the goal of undertaking a long-distance ride.

“Everybody trained really hard. Some of the group had not cycled for years, but they showed great tenacity and commitment to taking part. Several of our riders have been touched by cancer at some point. It was a long and emotionally and physically draining day.”

Donations are still welcome via a dedicated page on the JustGiving website.