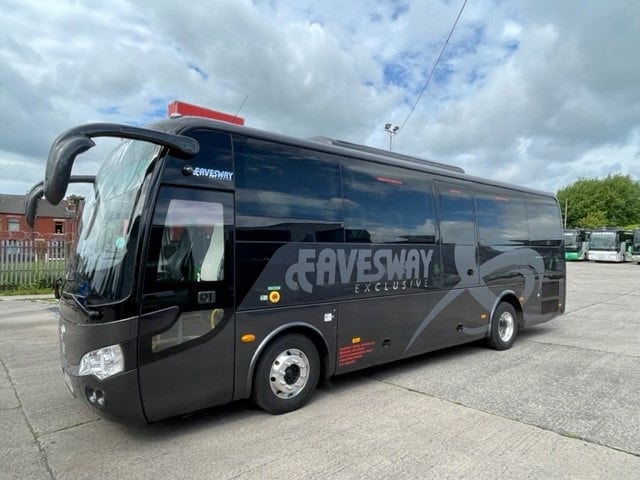 Eavesway Travel has taken delivery of a customised, built to order Yutong TC9 midicoach in what represents conquest business for both supplier Pelican Bus and Coach and the Yutong marque.

The TC9 has been produced to the Ashton-in-Makerfield operator’s specification by Yutong, including paint finish and its 26 cream leather seats with blue trim.

Two tables are fitted at the rear, while behind that is a large walk-in kitchen and servery area that includes running water, storage and food warming facilities among other amenities. That area of the coach was completed by AD Coach Systems.

Pelican UK Coach Sales Manager Simon Collins explains that a dialogue between the operator and supplier during the COVID-19 pandemic led to the order being placed. “Eavesway was looking for a tailored vehicle solution with a special interior, and we were happy to oblige,” says Mr Collins.

“The high standard specification of the TC9 and backup from Pelican that the team there had heard about helped to secure this order. All parties involved are very impressed with the fantastic outcome.”

The TC9 for Eavesway is powered by a Cummins ISB6.7 engine coupled to a ZF EcoLife automatic gearbox. It also has an additional nearside door as pre-preparation for any future need for PSVAR compliance.