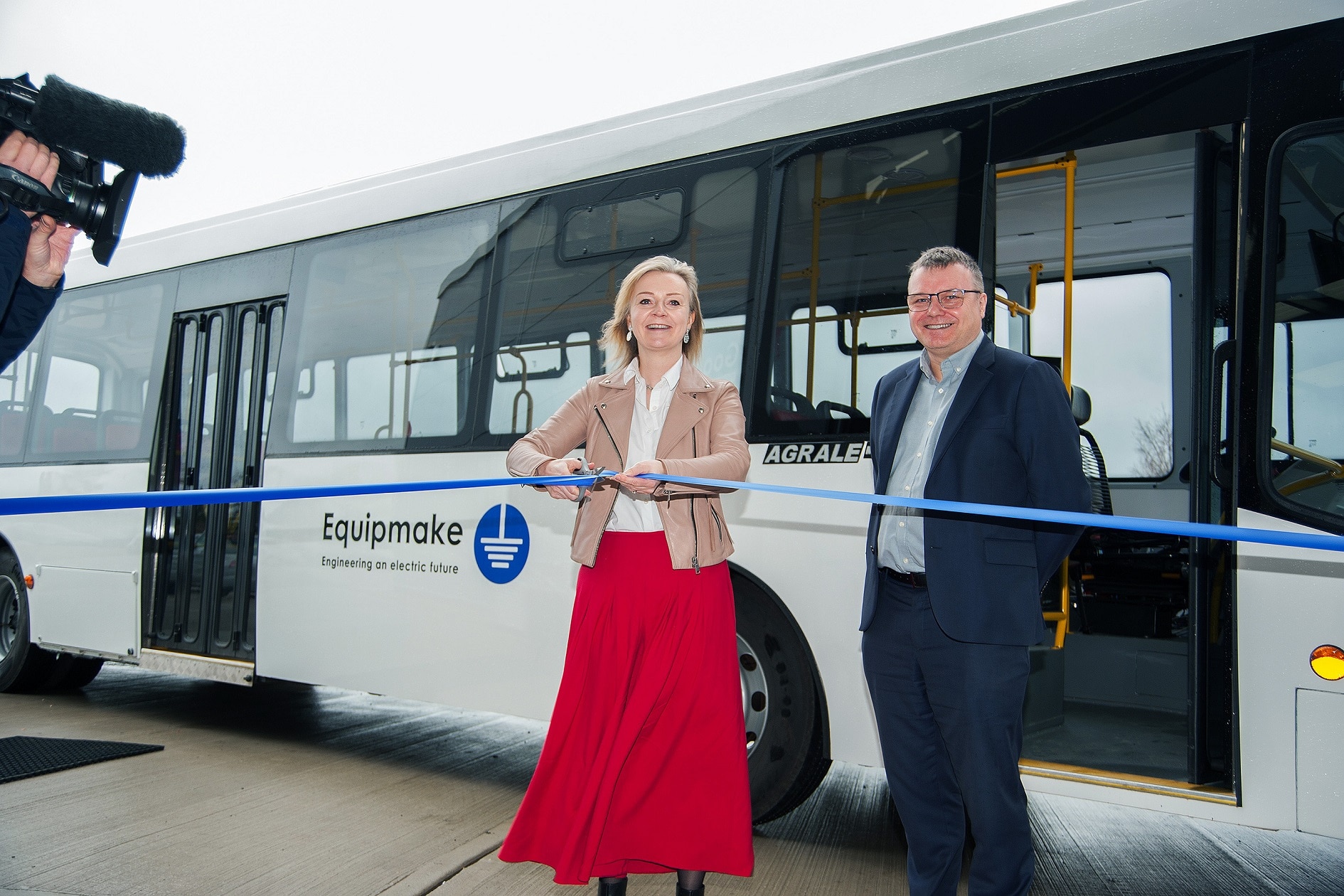 A surprise new name in the battery electric bus sector in 2019 Is Equipmake. With its own driveline, it plans to offer both double- and single-deck models that promise low energy consumption

Equipmake, a recent entrant into the battery electric bus market, opened its Snetterton plant on Friday last week (6 December). At the same time, it reaffirmed its plans to debut a zero-emission double-decker in passenger carrying service in the UK in 2021.

Equipmake’s double-decker chassis debuted at Busworld Brussels in October. Its first entirely built-up product is a low entry battery-electric single-decker that will soon enter service in Argentina. That destination gives an insight into how Equipmake’s business model is structured.

It is a producer of zero-emission driveline technology. Batteries are sourced from the same factory in Sunderland that provides those for the Nissan Leaf, and bare chassis are fabricated by Agrale in Argentina.

Agrale has also bodied the first single-decker with a design that suits the South American market. It remains to be seen where the bodies for double-deck chassis will come from, but Equipmake will not produce them itself.

Instead, it is currently talking to various potential partners. One of them is UK-based. An announcement will follow “within the next few weeks,” says MD Ian Foley. He is already talking of significant volumes for Equipmake, initially in the single-deck market in South America.

Although Equipmake has interests in other automotive sectors and the aerospace world, buses are now its core focus. It has 52 employees at Snetterton and that is expected to grow to 70 by the end of 2020.

Equipmake claims low energy use for its battery-electric bus driveline

Design and manufacture work on the driveline is undertaken at Snetterton, with £300,000 recently invested in a CNC machine there. The double-decker has a ZF drive axle with the propeller shaft and twin motors offset to the nearside. A ZF axle is also fitted at the front.

As already outlined in routeone, batteries are distributed for weight purposes. On the prototype double-decker chassis two 78kW/h packs are ahead of the rear axle and one is at the rear offside. Ian adds that another pack could be added under the staircase if needed.

Whether that will happen be remains to be seen. Equipmake promises very low energy consumption, with a figure of 0.8kW/h per km suggested.

That is partially due to the work it continues to do on heating and cooling. Equipmake is currently designing its own thermal management system that, besides serving the passenger area, will also monitor the temperature of the batteries, the gearbox and the invertor. A heat pump will be used.

Smart ratios in a two-speed gearbox give performance benefits

That two-speed gearbox is a key part of the Equipmake design. While it will not be fitted to every bus, when it is present, it will give a performance benefit in applications that require it.

Ratios will be optimised to suit the customer, but it will have benefits at two ends of the spectrum. One will be where very high torque is required at low speeds in challenging terrain. The other will be where the bus will be used on services that require a good turn of pace.

“For most operators a single ratio will cover their requirements, but we are mindful of the spreading appeal of electrification.

The two-speed gearbox caters to that,” says Ian, although he adds that not specifying it will deliver a cost benefit.

The double-decker carries an onboard charger which plugs into a three-phase supply. The manufacturer believes that will simplify the process of depot integration. Battery life is targeted at 10 years, although when a change is required the packs have been designed to be easy to handle.

In the longer term, a hydrogen fuel cell variant of the bus could be offered. Ian says that the driveline is compatible with such an energy source.

Equipmake was founded by Ian 20 years ago. Its funding for an entry into the bus market has come from investors, grants and consultancy work in other sectors. Ian is confident that it will make its mark, helped by a strong team of engineers at Snetterton.

Volumes will come first in South America. The prototype single-decker will enter service in Buenos Aires soon and Equipmake has received enquiries from other countries on the continent. It is already talking of supplying 700 battery-electric buses there in the first year of production.

The double-decker is destined to come to market later, although it will be bodied and commence testing next year. Early discussions with potential operators for in-service trials after that are underway. Equipmake is also open to producing single-deckers for the UK, including lighter models.

That is what is known about the range. Other things will not be confirmed until the double-decker chassis carries a body; the initial plan is that it will be plated at a GVW of 18,000kg, but Equipmake has left the door open for that figure to settle at 19,500kg if needed.

It’s early days for Equipmake’s venture into buses. But if it delivers what it promises, it stands to be a challenger in the long term.

routeone Team - May 27, 2022
The BYD Alexander Dennis (ADL) partnership has delivered its 1000th zero-emission battery-electric vehicle (BEV). The anniversary vehicle is a BYD ADL Enviro400EV, part-funded by the...