At Newcastle International Airport (NIA), the country’s first zero-emission airside bus has entered service in the form of a battery-electric Yutong ABe13. It was delivered in late 2020 and has been purchased without external support.

‘Entered service’ is something of an optimistic way in which to describe the ABe13’s career in the North East thus far. It has carried out a modest number of jobs owing to the decimation of air travel, to the extent that its 258kW/h batteries have been recharged twice in around five months.

But the airport is now busily preparing for an expected summer restart. When that happens, the Yutong will form a highly visible indicator to passengers of NIA’s 2035 net zero carbon target. That work will see the airport reduce and balance its carbon emissions. Zero-emission vehicles will form a significant part of that work.

Castleford-based Pelican Bus and Coach has supplied the ABe13. It reports interest from other UK airports in the type, albeit impacted by the almost total collapse of international travel. The ABe13 for NIA is of a design that has already been supplied to many other customers. It is left-hand drive with a capacity of 110 passengers. Eight of those are seated. There is room for two wheelchair users.

Driveline components are largely the same as those in Yutong’s other battery-electric models, although the ABe13’s energy storage capacity is lower than for roadgoing zero-emission buses and regenerative braking is absent. The latter is because an airside bus can seldom reach a speed where any useful energy recuperation can take place. The saloon air-conditioning unit is also the same as Yutong’s other vehicles.

That is where the similarities with landside Yutong battery-electric models end.

Perhaps most notably, the ABe13 is front-wheel drive. A water-cooled motor sits between the two seats in the sealed-off cab, and control equipment is over the front axle. Batteries are mounted on the roof. When all of that is combined, it allows a totally flat saloon floor from immediately behind the front axle to the extreme rear, except for the areas above the rear wheels.

Yutong makes good use of the available space. The eight seats are mounted back-to-back around the rear wheel arches and the manufacturer fits three wide doors on each side. One on each side has a fold-out ramp. As with Yutong’s roadgoing battery-electric models, heating is electric.

Battery-electric power is ideally suited to airside use. Daily mileages are minuscule compared to a public service application and the average vehicle lifespan is thus elongated. Yutong has already supplied the ABe13 to various other countries worldwide and it is in the process of delivering 40 to Hong Kong International Airport.

At 2019 levels of patronage, NIA would expect the ABe13 to carry out 15-20 passenger transfers per day. It expects to recharge the bus every 10 days at that level of utilisation. A standard CCS2 socket is at the nearside front for that purpose and the airport has purchased a 120kW charger for the bus.

A move towards net zero carbon will involve all of NIA’s vehicles becoming emission-free. That will see the replacement of the facility’s remaining seven diesel airside buses with battery-electric models and the same for car park shuttle buses. No timeframe has yet been set for that, but it will be accomplished by 2035.

The transition will also require NIA to generate and procure zero-carbon energy, plant trees and work with airlines to utilise the most efficient aircraft.

It has additionally pledged to engage with service providers to improve access to the airport via public transport, but it is not yet willing to disclose how those plans may proceed.

Pelican is holding a modest volume of parts that are specific to the ABe13. That stock is made up of faster-moving items such as panels. Managing Director Richard Crump points out that driveline commonality with the other battery-electric models that the dealership supplies means that any such requirements for the ABe13 are already covered. 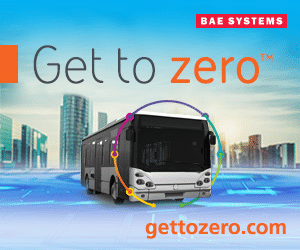 Tim Deakin - June 16, 2021
A move towards widespread operation of zero-emission buses (ZEBs) is now well underway, but – external funding aside – the transition’s financial realities are...