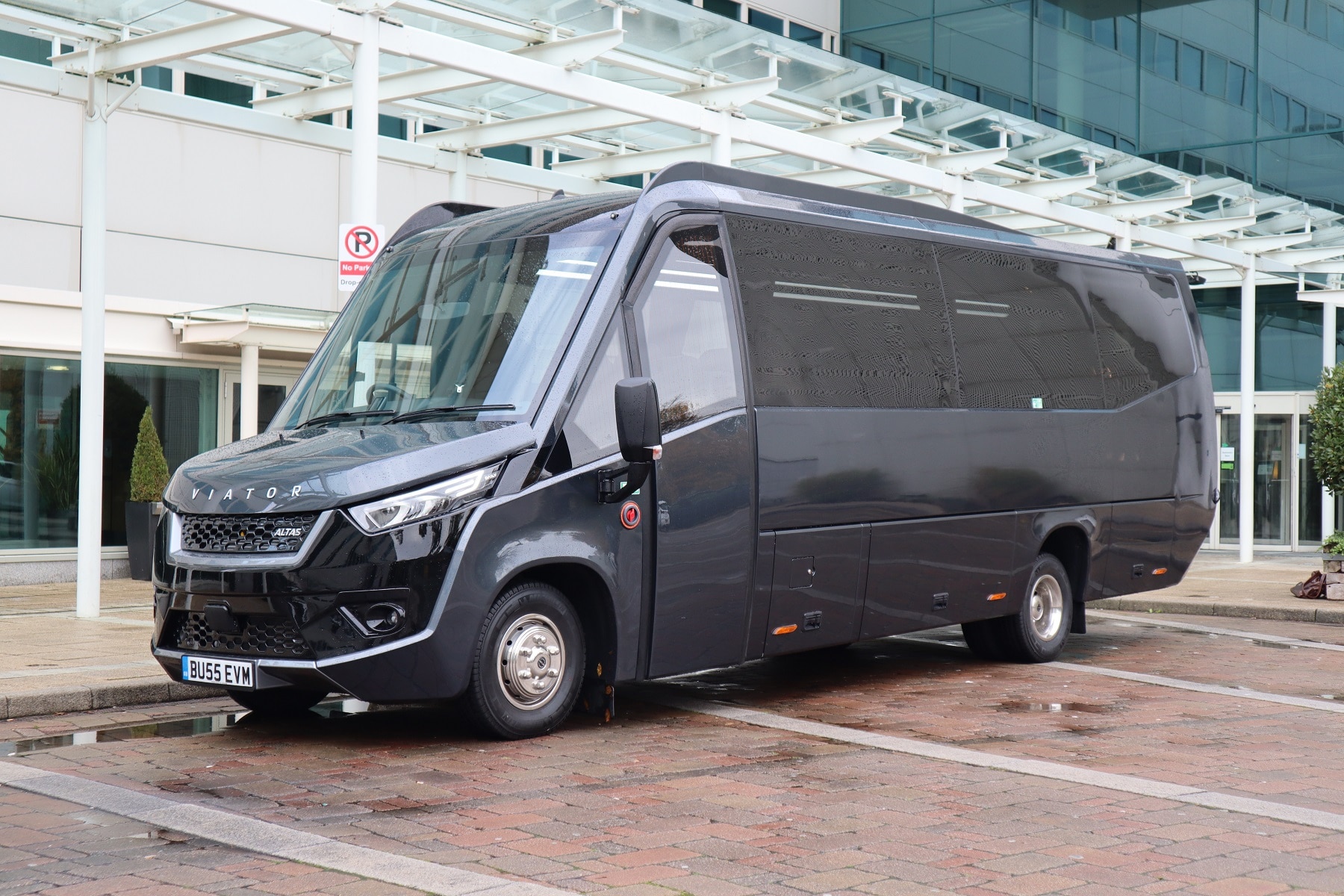 EVM announced in October that it will bring the Altas Viator midicoach to the UK and Ireland. The 29-seat Viator is built on a 7,200kg GVW Iveco Daily chassis and in many ways is an extension of EVM’s minicoach range. It is a high-specification model with many luxuries, but more seats.

Altas builds the Viator in Lithuania. The model’s gestation period has been long, but for good reason, says EVM Managing Director Danny McGee. Altas took a lot of time to ensure that the Viator is right for the market here. The current model has been developed from the first Viator that appeared at the IAA show in Hanover in 2018.

EVM sees a reasonable market for the Viator. Under normal circumstances, it would plan to sell around 25 per annum.

“The Viator is a natural progression from what we already do with the Mercedes-Benz Sprinter,” says Danny. “Lots of minicoach operators aspire to move into the Daily size bracket. The Viator will allow them to do so and maintain their relationship with EVM.”

The first right-hand drive Altas Viator arrived with EVM in October. Five more are on order. Those vehicles will incorporate feedback from the seed midicoach.

A small number of minor items requiring attention have been identified, but none that will require major work.

The second Viator was at the time of writing in finishing; numbers three and four were in build; and the chassis for vehicles five and six were awaiting admission to the plant.

“We have seen a lot of interest despite the current situation. We are still trying to gauge the level of interest in a PSVAR-compliant Viator, but it seems that PSVAR is not such a consideration at this size point as it is for full-size coaches,” says Danny. Nevertheless, there is scope for a lift within the boot. The final PSVAR solution will be developed after further feedback is received.

EVM sets a high standard specification level for the Viator

routeone recently examined and drove the first Viator. The Iveco front aspect is retained, but Altas has tweaked it to suit the coachbuilt body. The bonnet is widened, as are the LED headlights. A lower front dash styling kit is fitted.

Power is from the 3.0-litre F1C engine. It develops 210bhp and is coupled to the Hi-Matic eight-speed automatic gearbox.

The F1C revs a little harder than the engines used in some other small front-engined coaches. But it is exceptionally smooth, and its presence is difficult to detect except when it is under heavy load.

The Viator does not represent a cut-price option. The amount of development work that has gone into it contributes to that, but so do the fittings that come as standard.

For example, the rear axle rides on OEM air suspension and a Telma retarder is part of the driveline. It is activated by both the brake pedal and a dash handle. As it is electric, the retarder works independently of engine speed. Activation thus proved more than capable of slowing the Viator to walking pace on a slip road.

Noticeable parts of the design are upright, shallow mouldings on the roofline. While it may be expected that they are to hide the Autoclima air-conditioning unit, that is not their primary function.

Instead, they prevent rainwater from the roof from descending the sides of the Viator, and – most importantly – they keep it away from the Anlas Kalip plug door mechanism and the step. The brief drive of the Viator was blessed by wet weather, and the mouldings demonstrated their worth. When slowing, a large quantity of water cascaded forwards onto the windscreen.

Lots considered by Altas when carrying out design work

Thought has also gone into the Viator’s operational aspects. On both sides, top-hinged locker doors are fitted. One on each of the offside and the nearside accesses luggage storage areas.

Others allow access to the Ad-Blue tank on the nearside, and on the offside, the 12kW Eberspächer coolant pre-heater and the electrics and fuses beneath the cab. In addition, a 115-litre diesel tank is fitted.

Another consideration for practicality is in the 3.2m3 boot. The floor is not entirely flat. Instead, it is slightly bowl-shaped. A one-way valve is at the lowest point, meaning that any water brought in when loading bags in wet weather will drain.

The boot also benefits from a feed from the heating system, and it comes with LED lighting. A larger storage area could be fitted in combination with 27 seats, but EVM expects buyers’ focus to be on maximum passenger capacity. An offside emergency door is behind the rear axle. It comes with a well-engineered folding step.

Large mirrors are fitted, although a necessary change identified on the first Viator will see later examples come with the offside arm further forward. Currently it is behind part of the window framing when the driver’s seat is at the back stop. Rear-view cameras in place of mirrors were considered for the Viator and they may be revisited later.

Viator comes with many things as standard

The Viator comes with a sunken gangway. Because of that, a 2+1 layout is not currently available but is a possibility for the future.

The way that the entrance leads into the passenger area is good, and there is a lot of internal space around the doorway despite the presence of a compact courier seat.

Passenger seats are from STER, formerly Fource. They are the Active 30 model. In the seed Viator, EVM has specified a real leather finish. Side flaps, height-adjustable three-point belts and armrests are all included. Drop-down tables are not, but they are optional.

Already on each seat back is a phone holder. Coupled to an adjacent USB point, that enables passengers to view content on their own device.

In line with that, EVM has seen declining interest among customers in specifying DVD players and monitors in vehicles. The Viator has a DVD player as part of its touch-screen infotainment and sat-nav unit, but the first example lacks a front monitor. One is available if required.

Flooring is wood effect throughout, continuing in the boot and side lockers. Perimeter radiators are fitted, including transversely beneath the rear seats. Climate control governs the interior temperature.

Passenger service units are on the undersides of the luggage racks, which Altas fabricates itself. The arrangement is clever; racks have twin LED strip lights – one facing up, the other facing down – on the edges and air-conditioning vents point at the windows to avoid condensation.

The Viator’s cab is also well appointed. All functions relating to the body are governed via a compact control unit.

The Iveco OEM buttons are separate. Notably, the Daily as used has a ‘city’ mode for the power steering, which increases the assistance provided.

Usefully, the handbrake lever is relocated to the offside of the Pilot seat. That keeps it out of the way when accessing or leaving the cab. The seat is to a high specification and it includes heating, suspension and a hands-free microphone. On future examples of the Viator, the mic will be on the offside.

Each of the windscreen and the two quarterlights are heated, as are the electrically adjusted mirrors. The driver has a phone holder and two USB charging points.

Storage is available behind the seat or in a lockable portion of the offside luggage rack. More discreet is a top-loading compartment that is within the window ledge. It is topped with diamond stitched leather, but when that fascia is pushed, it opens to reveal the additional space.

EVM is correct to identify that the offside mirror requires moving slightly. For taller drivers, an area of glass above the signalling window that is covered with black material would also benefit from being clear.

But those points aside, the Viator gives little to pick at. It drives well; the 210bhp output of the F1C is noticeable at times when compared to the previously standard 180bhp rating in Dailys used in this category thus far.

EVM has achieved a market-leading position for its high-specification Sprinter-based minicoaches. While the Viator is a much more niche product, it is a serious challenger in its category.

National Bus Strategy: Devil is in the details for independents 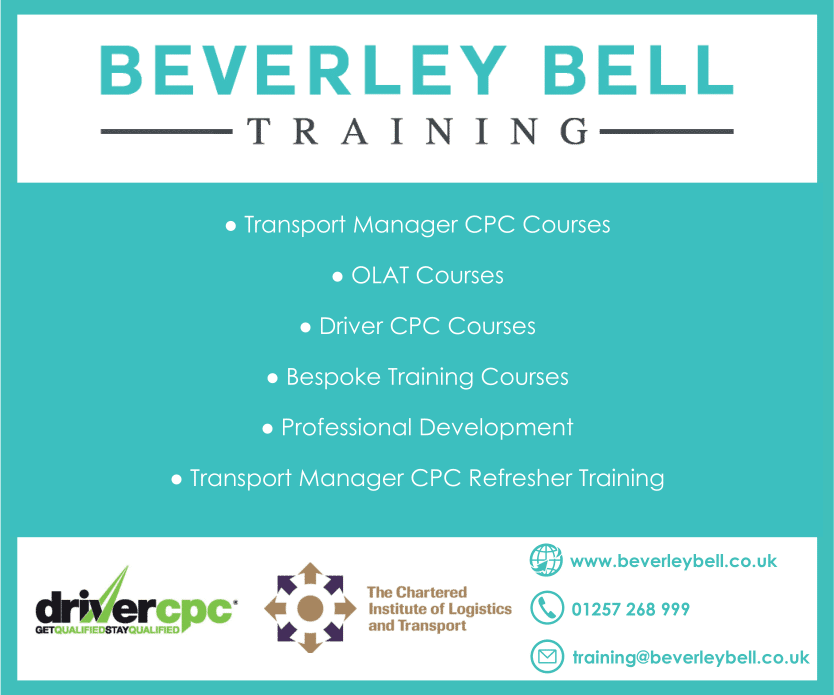 routeone Team - May 14, 2021
Johnsons Coach and Bus Travel will get its Luxury Traveller brand underway on Monday 17 May with a pair of high-specification 43-seat Irizar i8...