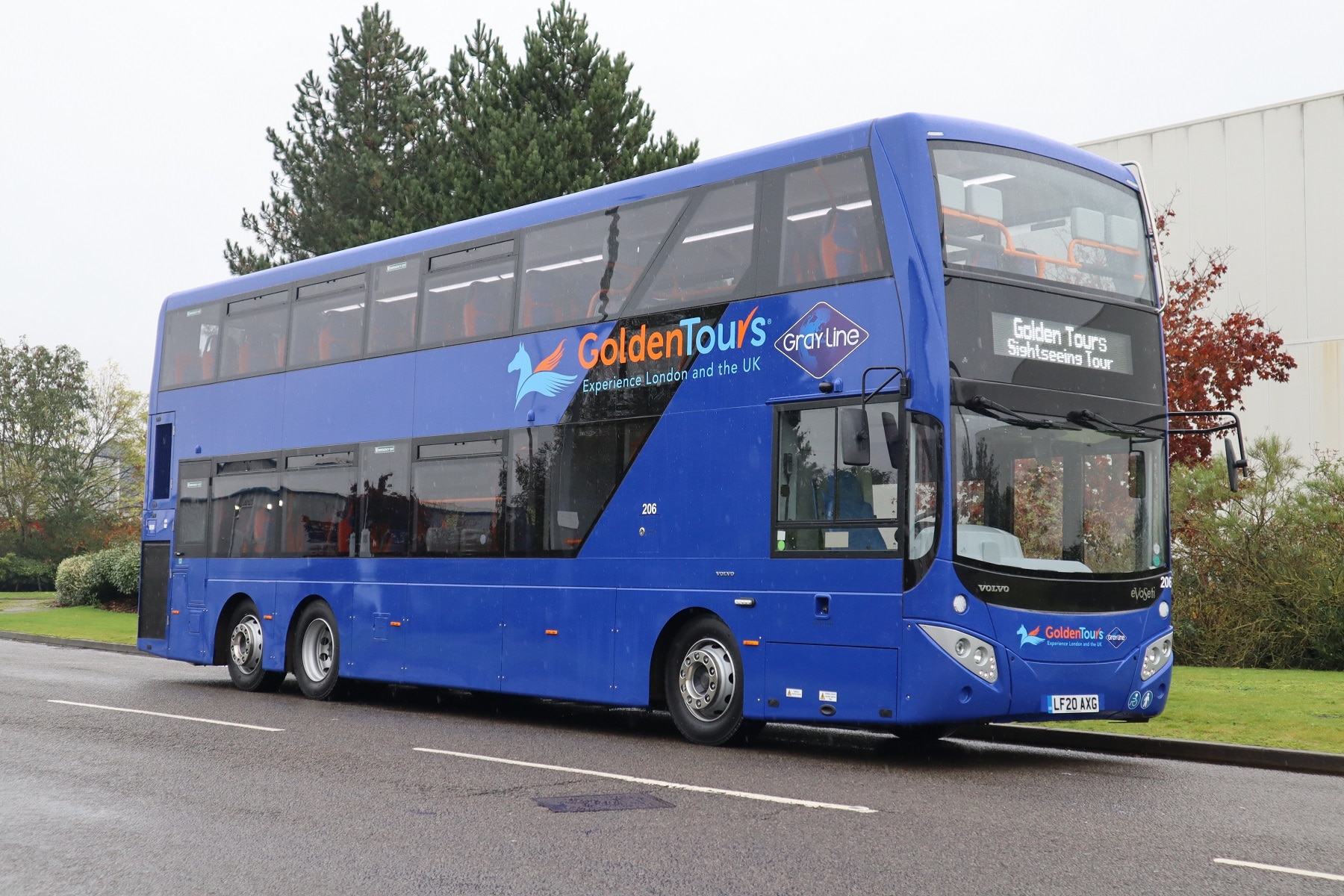 Tri-axle double-decker buses have long been a niche product in the UK. Volvo brought its B8L here in 2019 and it quickly found favour with a Scottish operator for local service work. But the B8L also suits private hire and other applications. That is demonstrated by eight with MCV EvoSeti bodywork for Golden Tours.

Those buses are built specifically to the customer’s requirements. Although the B8L majors on capacity, Golden Tours opted for 80 seats in its 12m buses. 95 is the maximum at that length. Buyers that are focussed on outright crowd shifting will find that the 12.8m variant seats a maximum of 100 passengers.

While the market for high-specification, high-capacity double-decker buses is modest, it is likely that the Volvo B8L will appeal to some operators. Not only is it a mighty mover for school applications, but PSVAR compliance even with 100 seats is a major plus for rail replacement duties.

Volvo’s previous venture into the UK tri-axle double-decker market saw its Euro V B9TL offered in such a format. Those buses are popular, and rare, on the second-hand market and they hold their value well. An operator with one also reports that they are excellent earners.

The Volvo B8L is not a development of any other model that the manufacturer offers in the UK. It was created initially for the Hong Kong market. A lot of Far Eastern standard fittings are present in the Golden Tours buses. That includes a high-capacity air-conditioning unit and Lazzerini Ethos seats. routeone was recently able to put one to the test.

The MCV EvoSeti bodywork on the Volvo B8L for Golden Tours is highly similar to that used in volume in Hong Kong. But a handful of variations have been included to suit the UK market.

A 47kW Denso air-conditioning unit is retained, but MCV has added opening windows. They are ordinarily locked so to prevent interference with the air-conditioning, but they can be released with a key.

As has previously been the case with MCV, a good number of such hoppers are provided. The Golden Tours buses have seven on the lower deck and eight upstairs. They also have an optional Eberspächer coolant pre-heater.

The B8L is powered by Volvo’s six-cylinder, 7.7-litre D8K engine developing 350bhp and 1,400Nm of torque. It is connected to a ZF EcoLife six-speed automatic gearbox. The driveline layout is unusual for a double-decker bus. The D8K is in line towards the nearside of the chassis. The resulting lack of an angle drive will no doubt benefit fuel consumption.

As befitting a chassis designed for right-hand drive applications, the radiator is on the offside. The diesel tank is under the stairs and the AdBlue filler is further back. The rearmost axle is fixed and has no option for either active or passive steering.

Three alternators are fitted to take account the electrical draw of the air-conditioning unit. For buyers requiring a more basic specification, the Denso system can be deleted. The Golden Tours buses have MCV’s glazed staircase. A more conventional panelled arrangement in that location can be fitted if required.

The test bus rides on 275 tyres. Volvo anticipates fitting 305s going forward. On the 12.8m B8L they are necessary to achieve a front axle loading that permits 100 seats.

EvoSeti for Golden Tours is well specified inside

Lazzerini’s Ethos is the sole seating option on the Volvo B8L-based EvoSeti. It is high backed and comes with three-point belts as standard.

The Ethos is lightweight and it has a thin back, both of which are key to achieving 100 seats at 12.8m. Golden Tours has chosen synthetic leather trim, but other finishes are available.

The operator has also specified seatback LCD screens to suit the buses’ tour application. They are of a reasonable size and include USB charging points.

In the lower saloon there are four bays of facing seats at the rear to take account of the axle layout there. No screens are provided at those positions, but a more basic commentary unit is mounted nearby. MCV can fit USB points either within the side walls or beneath the seats.

Two wheelchair user bays are fitted to the Golden Tours buses. Each passenger there has their own screen. One bay is an option if capacity needs to be maximised; MCV can alternatively fit luggage racks on the offside behind the staircase if required, as well as over the nearside front wheel. It can also offer a two-door layout.

Flooring has a classy silver-tinged wood effect covering and all steps are edged in yellow. Handrails are orange, which works well with the chosen seat trim combination.

Headroom on the lower deck is excellent, at well over 6ft. Along the centre of the ceiling runs air-conditioning trunking, with numerous vents to each side.

Because of that, the upper deck floor is slightly higher than it would be on a non-air-conditioned EvoSeti on a two-axle chassis. Headroom upstairs is thus more limited. Air-conditioning vents via coving panels on the upper deck.

No perimeter radiators are fitted to the Golden Tours EvoSetis. Instead, the air-conditioning system handles heating. It draws hot water from the engine, hence the Eberspächer pre-heater. The demisters are separate. A two-hour drive on a wet and relatively cold day demonstrated that the Denso unit has more than enough heating capacity for the UK climate.

All is well for the driver: Cab simple and straightforward

The B8L cab is relatively simple and straightforward. No anti-assault screen is fitted, but MCV can install one if required. There is a great deal of space for the driver’s belongings in a large door pocket and beneath the area where a ticket machine would go.

The signalling window is large and it has a manual blind. Immediately adjacent are a PA microphone and an alcohol detection handset. A sample of the driver’s breath is taken by the latter before the engine will turn over.

Most buttons are to the right of the steering wheel. Above the driver’s head are controls for the Mobitec destination display equipment, a screen monitoring the eight-camera CCTV system and – specific to Golden Tours – a unit for the commentary system.

The seat is from Chapman and the steering wheel adjusts well for reach and rake. It is released via the traditional Volvo pedal.

A tachograph is fitted and a DAB radio can also be installed.

Mirrors are adjusted manually and they give a good view. The A-pillar is quite thick, although it does not compromise visibility to the front in a major way. The handbrake is well located and reaching it does not require a stretch.

Put to the test: B8L MCV more than holds its own on A-roads

A 7.7-litre engine in a tri-axle double-decker would have been unimaginable in the past, but the D8K did remarkably well in an admittedly unladen test drive. It also works superbly with the EcoLife gearbox. The latter unit’s retarder blends seamlessly with Volvo’s foundation brakes.

Under normal driving circumstances, upshifts are made at low engine speeds even with the throttle fully open, typically around the 1,300rpm mark. The D8K is also happy to pull from around 1,000rpm when required.

A different approach is adopted when accelerating up a gradient. During an ascent away from a roundabout near Daventry the engine speed was taken beyond 2,000rpm, and the pace with which the climb was tackled was impressive.

The test bus is currently limited to 50mph, although a 56mph setting is available. At 50mph in top gear, the tachometer shows 1,700rpm. That contributes to A-road climbs being tackled without speed dropping.

Notable is how the B8L holds the tarmac well, not feeling side winds as much as it might.

Drag from the fixed rear axle makes itself known during tight manoeuvres, but it has little impact on how quickly the bus changes direction.

It handled a right turn at a small roundabout remarkably easily.

Is this combination a new challenger for high capacity work?

The B8L is a small-volume product for the UK, but the performance of its predecessor, the tri-axle B9TL, demonstrated that demand exists for such a vehicle. 350bhp makes the B8L well suited to motorway work as well as local duties and the magic number of 100 seats is sure to attract attention.

Volvo sees that some of those B9TLs will be due for replacement before long. That was one reason to bring the B8L to the UK. But the ease with which it could be homologated was another positive, says Regional Account Manager – Richard Mann.

“This is a versatile vehicle,” he adds. “Customers have been asking for 100 seats for a long time. While Volvo is the prime contractor and will primarily support the vehicles through our dealer network, MCV UK is well established.

“It has its own workshop and premises near Ely and an aftermarket capability. That has helped to build relationships with customers.”

MCV’s contribution to the buses for Golden Tours demonstrates the EvoSeti’s customisation potential.

The test bus is well finished and it has a warm and welcoming interior. It would not be a challenge to undertake anything from a motorway trip to a local private hire in it – from the perspective of either the driver or a passenger.