Home Features BusyBus: A difficult 2020 leading into a hopeful 2021 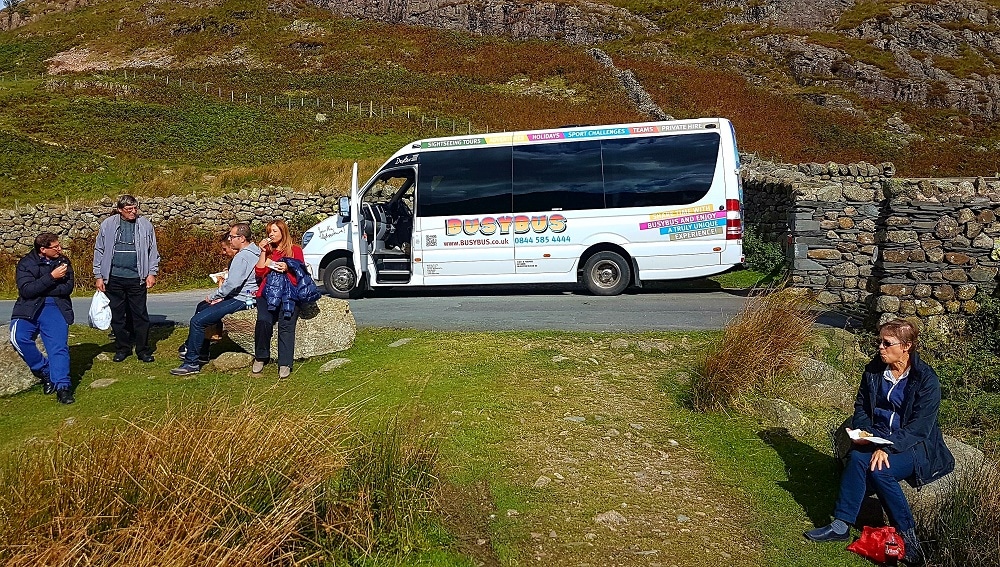 The need to be in position to capitalise on a coming year’s trade has never been more important than it is as 2020 draws to a close. That is easier said than done for many coach operators, who have seen this year turn into a write-off. Cheshire-based BusyBus is among them. It saw a “tsunami” of refund demands as the pandemic began, but it has also worked hard to leverage support packages.

BusyBus runs a small minicoach fleet on what Managing Director Peter Rosenfeld describes as “immersive tours.” Until March it relied heavily on cruise passengers. That market was wiped out immediately and indefinitely. Refund demands followed.

“Customers in the United States were particularly aggressive. We did not get empathetic requests. We got demands stating that if their money was not returned within 24 hours, our reputation would be destroyed on TripAdvisor,” says Peter.

BusyBus quickly saw £200,000 flow out of its bank account. With hindsight, Peter believes that was the wrong approach. Instead, it should have offered vouchers that could be redeemed for cash if they were unused after 18 months. While refunding hurt, it did bring benefits of a sort. BusyBus was cited as having behaved in an exemplary manner.

Despite BusyBus’s utilisation of the Coronavirus Job Support Scheme, such an outflow of funds came with consequences. What had been a business with strong cashflow was put in an awkward position. But work undertaken as soon as the pandemic broke had already delivered some mitigation.

“We are a tour provider and listed as such by Companies House. That puts us in the visitor economy for the purpose of grants. We were able to take advantage of that funding thanks to our standard industrial classification (SIC) code.”

He believes that SIC categorisation goes some way to assuaging a view that the coach industry’s lack of eligibility for earlier non-discretionary visitor economy grants was down to a ‘postcode lottery’.

BusyBus’s experience with Cheshire West and Chester (CWAC) Council indicates that SIC coding is key to the grants process. “CWAC was excellent. Money was paid quickly,” says Peter. That has continued in the later stages of the pandemic.

But he also gives credit to two tourism associations that BusyBus is part of. Marketing Cheshire and VisitLiverpool have provided consistent accurate and helpful advice on what grants have been available and how to apply for them.

A good relationship with its bank also helped BusyBus to secure money through the Coronavirus Business Interruption Loan Scheme. Those funds still sit in its bank account. But they solved the cashflow problem and have prevented any potential issues with meeting financial standing levels.

Grants bookended a brief but fruitful summer restart for BusyBus. It is now again shut down, although Peter explains that such a situation is largely normal for the winter period. But recovery in August was “vertical.” That gives hope for the same in Q2 2021, subject to the administration of vaccines.

Something that BusyBus had to quickly understand when business restarted was a changed demographic. A lack of international tourists meant, and for the medium term will continue to mean, that the product needed to change.

“Our trips are immersive sightseeing tours. They tell a story. It can be almost Disney-like. We get lost in Snowdonia, chase sheep around fields and so on. That approach does not work with UK customers. It is not amusing to them,” says Peter.

“As a business we struggled for three or four days. Working out how we could convert a day trip that is designed around visitors from the United States to something that satisfied the British market left us tearing our hair out. We upset a few people, but we quickly captured the audience.”

One thing that could have hamstrung BusyBus was the size of its vehicles. They seat 16. It utilised onboard bubbles that allow it to carry between eight and 14 passengers, depending on the size of each bubble. That approach was rubber-stamped by both the company’s insurers and the Good to Go scheme.

Knowledge and relationships are key for BusyBus

Peter is eager that his speaking about BusyBus’s success in obtaining funding is not seen as a gloat. As a tour business that operates its own vehicles, the company is lucky that its SIC classification put it in scope. It could just as easily not have been. He also believes that how some grants have been allocated is “grossly unfair.”

Busybus has worked to leverage business relationships and memberships of regional tourism groups. Not all the latter have delivered. Marketing Cheshire and VisitLiverpool are “excellent,” but the performance of another such organisation was dire.

“At the beginning of the crisis the key was to understand your business’s circumstances and then absorb information. Grasping how the public sector works is also important. That is not always easy.”

Refunding £200,000 over a short period was immensely stressful for a small business. But BusyBus, like many of its peers, believes that 2021 should be a strong year for domestic tourism – for both itself, and for the wider coach industry.