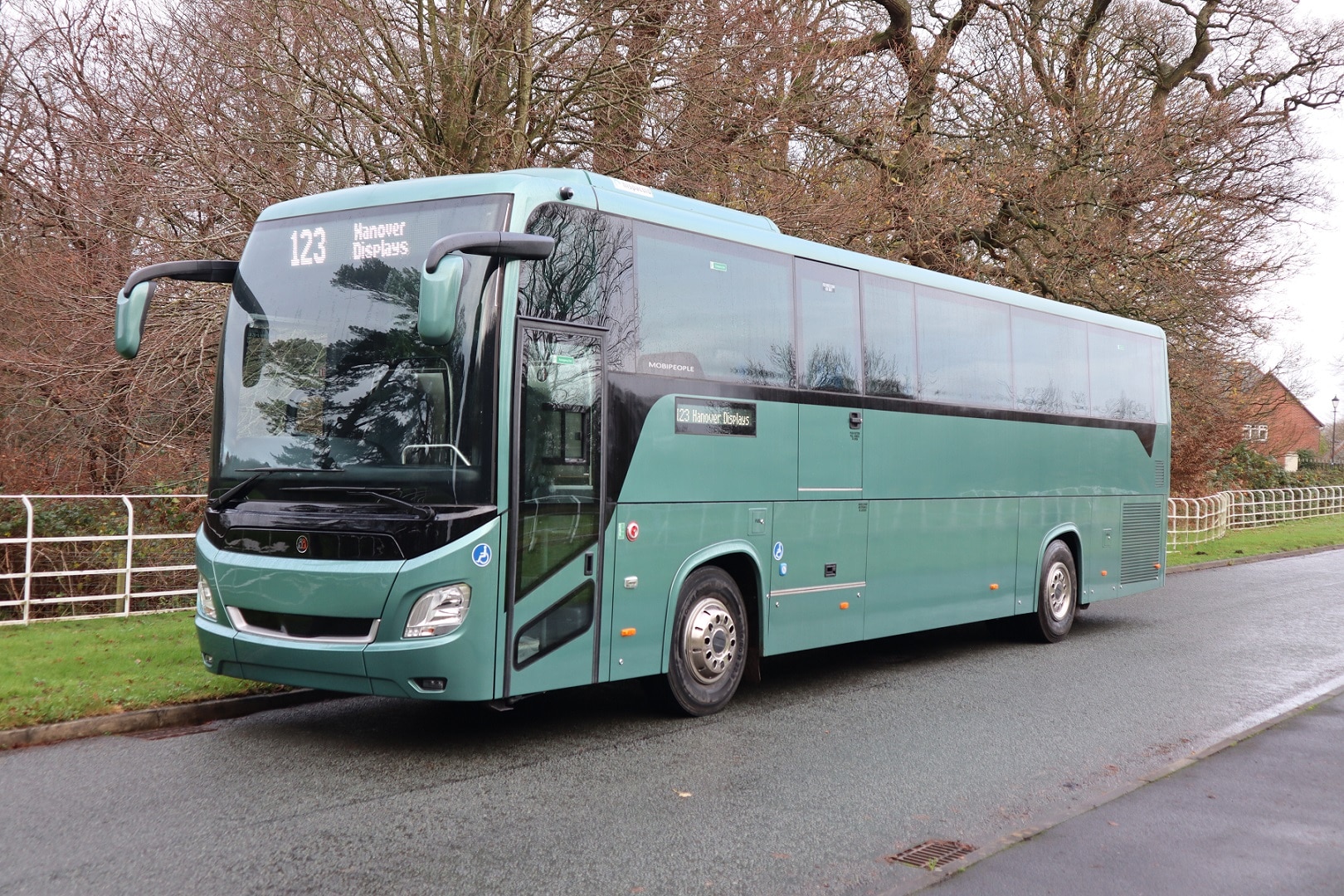 MOBIpeople has achieved a solid reputation since its products debuted in the UK through dealership BASE Coach Sales, and with the arrival of the high-floor Premium, the Portuguese manufacturer is now active in the touring market.

BASE commissioned MOBIpeople to design the Premium after the Barbi Galileo ended production. While not sold in big numbers, the Galileo was highly customisable and was appreciated by those that bought it. BASE hopes that the Premium will continue in that vein.

Both Premiums built so far are on the MAN RR2 underframe, although Scania is an option. The first went to Anthony’s Travel. It is fitted out for a team transport application. The second is with BASE’s parent, Holmeswood Coaches.

Holmeswood’s Premium is specified for touring and private hire work. It is PSVAR compliant. Tracking has been installed to allow the carriage of six wheelchair users, but the model will take up to 11.

The Premium is also available with no concession to PSVAR, or to a ‘halfway house’ specification. In the latter case, it is prepared for compliance at the factory, but some items – principally the lift – are left out, to be added later.

The MAN RR2 chassis beneath each Premium built thus far is well established. It comes has the 12.4-litre D26 engine that develops 430bhp and 2,200Nm of torque.

Both of those figures are more than ample for a two-axle coach. They are marshalled by a ZF EcoLife automatic gearbox.

Although demand for new coaches is currently stunted, BASE has engaged MOBIpeople to build stock and to retrofit existing vehicles to satisfy PSVAR.

That has enabled it to retain all production staff in readiness for recovery. Ahead of the coach being registered, Holmeswood kindly made its Premium available for a routeone Test Drive.

At 3.75m to its Hispacold air-conditioning unit, the Premium is a tall coach. It has 15m3 of underfloor space, which is maximised by Holmeswood’s specification of a floor-level toilet. MOBIpeople can install a centre sunken alternative if required.

The Masats door comes with a lower-level window. Although the mirrors give a good view to the sides when correctly adjusted, the additional glazed ‘letterbox’ will be useful in areas where cyclists are common. The test coach has a manually operated continental door, but the Premium for Anthony’s Travel has a powered installation.

Immediately behind the front axle in the luggage bay is a PLS Mega-H lift. It has a maximum capacity of 400kg. Its operation is simple, and drivers will quickly become used to it. A shelf is above the lift and cases can thus be stacked on top.

The main luggage bay doors are large and on the Holmeswood coach they are powered, although MOBIpeople offers manual operation if required.

The RR2 chassis has independent front suspension. Its 480-litre fuel tank is above the steer axle with a filler on each side. AdBlue goes in on the nearside behind the rear axle and ahead of the radiator.

A further part of the PSVAR specification are front and nearside destination display units and a rear number repeater. They are from Hanover and use white LEDs.

A positive of the Premium’s design is good access to the external lower dash. Both corner panels, including the headlight units, are hinged. They also come away via four bolts should replacement be needed. The upper centre panel lifts to reveal the demister box.

While the Barbi Galileo that the Premium has succeeded included a three-axle option, the Premium does not. BASE points out that its recently signed agreement to supply Beulas coaches on MAN and Scania chassis covers that segment.

Step edges are lined in yellow. At the front, they also have LED strips that can illuminate in various colours. LED lights are fitted to luggage rack edges. In the Holmeswood coach they emit white light, but in the Anthony’s Travel vehicle they, too, have scope for different colours.

The aisle is sloped slightly at the front, but by the third row of seats it is flat, hence the scope to carry up to 11 wheelchair users.

Three-point belts, armrests and cup holders are fitted. Drop-down tables can be specified, as can slide-apart functionality.

Silver-grey wood-effect flooring is included and the side walls, curtains and the undersides of the luggage racks continue that theme. USB charging points are mounted beneath seats.

Perimeter radiators form part of a comprehensive climate control system. A freestanding servery and top-loading fridge unit is adjacent to the continental door; another fridge can be included in the dash, but it is absent from the Holmeswood coach.

Seats that are removable are mounted on quick release ‘feet’ and tracking that are both from BraunAbility. In accessible Premiums, the extent of tracking that can be fitted varies from enough for one wheelchair user to full front-to-back provision on both sides. The door that serves the lift seals well and generates no wind noise.

In the cab, almost all buttons are to the driver’s left. Sensibly, that console is angled to prevent it being a convenient place to leave a drink. Space for a cup or a can is in an area beneath the signalling window, although the amount of storage there for other items could be greater.

The seat is well-specified, although it would benefit from more rearward movement. It does not have a hands-free microphone although one can be specified. Instead, the Holmeswood Premium has hand-held microphones for both the driver and the courier.

Buttons for chassis controls are to the driver’s right. That includes the steering column release, which gives good scope for adjustment. The well-sited handbrake lever is also here, as is the rotary gear selector and the mirror adjustment control.

Within the dash is a colour LCD screen to monitor the reversing camera and separate radio and DVD head units. Twin monitors are fitted, but like other dealerships, BASE has seen interest in DVD installations drop off as passengers increasingly move towards using their own devices.

Twin powered windscreen blinds are fitted. That above the signalling window is manual, although the lowering section of glazing there is powered. The coach also has a manual péage window.

Visibility from the cab is good, but the A-pillars are thick. That must be considered on roundabouts and at junctions.

Powerful D26 engine means that no sweat is broken on road

The RR2 chassis has power to spare for a two-axle application and 2,200Nm of torque is enough for the most challenging of tasks. That it is transmitted by the fully automatic EcoLife gearbox further enhances driveability.

Acceleration under full throttle is rapid. Thanks to the D26’s peak torque arriving from below 1,000rpm, that characteristic continues at higher road speeds.

Even fully loaded, the Premium would undoubtedly tackle the most challenging terrain with ease. The EcoLife uses that torque well, keeping the tachometer in the lower part of the variable green band.

Momentum is shed just as easily. The gearbox retarder is activated by both the brake pedal and a stalk. It brings speed down quickly, with a final stop using the foundation brakes easy to accomplish smoothly.

At 12.5m, the Premium is not the longest coach on two axles. That is to its benefit in urban settings and it proved to be manoeuvrable in a residential part of north Liverpool. The driver thus quickly becomes confident in the MAN underframe and its ability to handle busy environments.

Independent front suspension further aids road manners. While it was not possible to push the coach hard through bends, road surfaces encountered in early December were universally damp and some were muddy. Neither condition worried the RR2.

Premium is a worthy addition to MOBIpeople range

The Premium fills the touring coach niche for MOBIpeople but it is eminently capable of doing much else besides. It complements the Explorer range nicely; in low-height 330 form the latter has established a particular following in the 74-seat market and the higher 360 remains an option.

MOBIpeople has a flexible approach to product specification. As demonstrated by the Anthony’s Travel Premium, there is wide scope for customisation, both from the factory and after arrival in the UK.

An ex-factory PSVAR option is a further plus in a market that has quickly come to see compliance as mandatory for most new coaches. That opens the Premium to use on rail replacement and home-to-school duties when it is not required for touring.

Its internal specification also suits the private hire application, and the ‘point and shoot’ EcoLife gearbox as standard means that it suits both in the urban jungle and the charge of drivers of varying abilities.

To complement the MOBIpeople product, BASE has developed a strong reputation for aftersales support. A lot of its custom is repeat business.

That is evidenced by the number of multi-deal buyers for the Explorer and the MAN TGL-based Midi Explorer. In addition, the dealership has already started work in transitioning Barbi customers to MOBIpeople.

The market for two-axle, 53-seat touring coaches has seldom been so competitive. But the MOBIpeople Premium is a worthy addition to its ranks.