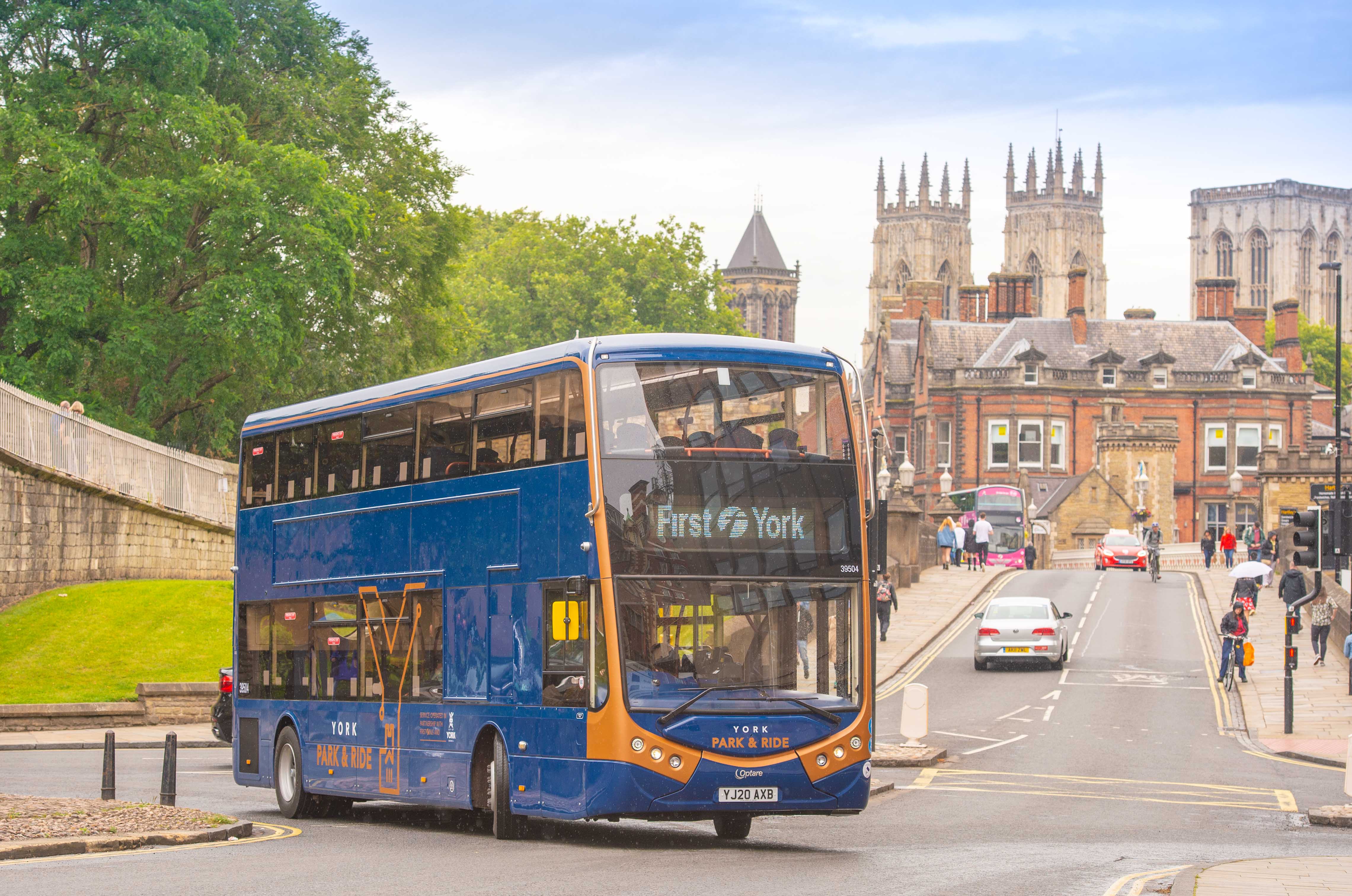 First Bus was the second of the ‘big five’ to commit to operating a fully zero-emission fleet when the annual results of parent FirstGroup were published in July. It will reach that milestone by 2035.

First Bus’s move to zero-emission will result in some operational changes when the transition begins in earnest. While a further part of First’s committment is that it will buy no more diesel buses after 2022, Managing Director Giles Fearnley says that does not represent an arbitrary date where one tap will be turned off and another turned on.

As an example, he points to the first of what will be 21 battery-electric Optare Metrodecker EVs in York (pictured, above). Combined with 12 earlier Versa EVs, they will result in around 30% of the First York fleet becoming zero-emission.

More battery-electric buses are on order for other First operations in Yorkshire. Nine Yutong E10 single-deckers are to join the Leeds fleet. They will later be complemented by five other double-deckers for a park-and-ride service in the same city.

But a piecemeal approach to the transition will soon be dropped. Mr Fearnley points to the Metrodecker EV fleet in York as a demonstration that the only way to make the headway that is required is by taking zero-emission buses in larger numbers.

The shift to zero-emission will mean that parts of First Bus that do not traditionally receive new buses in significant number will see investment. The move will be approached on a depot-by-depot or network-by-network basis. While some areas will thus be dealt with much sooner than others, there will still be early benefits for locations in the latter category.

Existing strong partnerships will “heavily define” which areas see a transition away from diesel soonest. Leeds is once again relevant here. It will be among the areas of First’s operation that are part of an early move to zero-emission fleets.

Leeds has already seen major investment in new Euro VI diesels. A further order for such buses is likely soon. The coming of zero-emission will allow those vehicles to move elsewhere. That will displace older and less environmentally friendly stock for disposal.

First York is a further candidate for an early switch. The 33 EVs already in service or on order there give strong momentum for more. “York is ideal in every sense,” says Mr Fearnley. Additionally, York City Council had adopted a pro-bus approach and it is looking to restrict car use in parts of the city centre.

First Bus: Challenges with zero-emission transition can be overcome

First accepts that as the move towards zero-emission continues, growing pains will come with it. How they are dealt with will be key to the milestone project’s overall success, says Director of Strategy John Dowie.

One influencing factor will be how quickly battery-electric technology continues to develop. “We have to think about the operational requirements of a network and how buses fit within those parameters. That may lead to some changes in how we schedule a route. What we want to avoid is opportunity charging.”

Other challenges will lie in how depots are configured to accommodate zero-emission fleets. Importing sufficient power to meet the peak charging demand for battery-electric buses will be a further important consideration.

The latter will not come down to a simple ‘new is good, old is bad’ approach, Mr Dowie continues. It could be the case that bringing enough power into a modern depot is expensive because the local grid is already at capacity. Likewise, an older depot could be in an area that other industries have left, giving sufficient slack.

But the overriding thought is that First’s depot estate will not be a “prisoner of the past,” he says. That could mean that layouts and organisation plans are overhauled. It may also lead to relocation, if that is the most effective path.

Transitioning engineers to new technologies will be a further challenge. First Bus already has some experience in that regard.

“We typically go through a learning curve when battery-electric or hydrogen fuel cell-electric buses are brought into a depot that has hitherto been completely diesel. There are some initial ‘birthing pains’,” Mr Dowie continues.

“But we find that after a few months, when they have been worked through, the reaction is highly positive.”

Experience gained at York, and of hydrogen fuel-cell electric buses in Aberdeen, will be leveraged. Additionally, manufacturers will assist in the transition. It is possible that some depot roles could be seconded to them.

Opinions differ on whether battery-electric or hydrogen fuel cell-electric is the best route to zero-emission fleet operation. A common opinion is that a mix of the two will be the optimum. First shares that view.

“It is possible that when we are 10 or 15 years further on, one of those technologies will have ‘won’,” says Mr Dowie. It would be foolish to make that call now. Battery-electric has great strength in volumes and operating experience, but fuel cell has benefits in terms of range. Additionally, refuelling a hydrogen bus takes relatively little time.

“I could perhaps see a solution where battery is the preferred option for urban, short-distance networks and fuel cell is used on interurban services, or in markets where there is hilly terrain,” he continues.

That train of thought is challenged a little where First has only one depot in a particular area, and especially where it is a smaller base. There, it is unlikely to be cost-effective to have both energy sources within the same premises.

But in other locations it will be. Caledonia depot in Glasgow, capable of holding 450 buses, would undoubtedly suit both technologies through economies of scale. Equally, in areas where First has more than one operating centre, battery and fuel cell buses could be divided into ‘silos’ easily.

First will not draw a line under diesel until the end of 2022. But its move to zero-emission has already started. Battery-electric buses are in service or on order in a number of locations and the existing fuel cell fleet in Aberdeen will soon expand.

Where progress will be slower is in First’s relatively small coach fleets. The biggest challenge there will be presented by coaches that are used on scheduled services. That particulaely concerns the intensive Aircoach operation centred on Dublin Airport and the Heathrow RailAir link.

In both of those cases, vehicles are replaced more regularly and there is thus no pressure to meet the 2035 deadline. For coaches, First “can comfortably be a follower,” says Mr Dowie.

It will carefully watch the work that is done by National Express to convert its ‘white fleet’. But First believes that for range purposes, hydrogen will be the answer in coach applications.

What is clear is that First Bus’s 2035 commitment is heavily reliant in its earlier stages on government funding for 4,000 zero-emission buses across the wider industry.

First says that instead of public money being allocated as a grant to cover a percentage of the incremental cost per vehicle, a leasing scheme proposed by the Confederation of Passenger Transport is a much better approach. As the industry emerges from coronavirus COVID-19, it will avoid cash flow issues that will otherwise challenge the sector, says Mr Dowie.

That apart, the move towards zero-emission for First Bus will be the largest change that its business has ever seen. It will no doubt be a steep learning curve. Announcing the transition now gives time to plan and prepare, and those activities will be required over coming years. The change is, says Mr Fearnley, intended as a firm commitment – not a feelgood soundbite.