To kick off 2023, FlixBus and McGill’s have announced a significant partnership expansion for the pair’s Scottish scheduled coach network that builds on recent success

FlixBus has moved a step further in its plans to build the largest intercity coach network in the UK, by announcing a significant expansion of its partnership with McGill’s in Scotland.

The collaboration will eventually see 25 coaches on the FlixBus-McGill’s partner network. That will comprise the introduction of new routes, to be announced in the future.

In an exclusive interview, routeone speaks with Andreas Schörling, FlixBus Managing Director UK, and McGill’s CEO Ralph Roberts on why the partnership between McGill’s and FlixBus has proven so successful – and why now is the right time to grow and “redefine” the Scottish scheduled coach network.

The expansion follows strong partnership that the two companies have built since starting on a small scale in 2021. FlixBus extended its scheduled coach network into Scotland in July 2021 by adding Edinburgh and Glasgow to its cross-border east coast mainline. It announced its entrance to the Scottish internal market with the launch the daily 91 service between Glasgow and Aberdeen in August 2022.

Andreas puts the successful working down to a “high degree of trust” between the two organisations. “We see McGill’s as a very reliable partner,” he says. “It delivers incredibly high quality in the services that we are operating together. It takes pride in its work, and we share an ambitious mindset.

“We communicated when we entered the UK market that we intend to build the largest intercity coach network in the UK. We maintain that ambition, and to achieve that we need to have strong and reliable partners such as McGill’s, Ralph and his team.”

Another contributing factor to the expansion is a successful 2022 for the wider FlixBus network. The business carried its one millionth UK coach passenger in the summer as part of a reported 94% increase in customer numbers between April and September compared to the same period in 2021. The same period saw the launch of its first line into the Scottish domestic market, and its first international line into the UK domestic market, connecting Manchester, Birmingham and Cambridge with Paris. That strength was present in the wider FlixBus group, which globally saw 34 million passengers over its summer season.

McGill’s reveals its initial involvement with FlixBus came as it sought a franchise with “similarly high expectations” for service delivery as its own.

In its own right, the Greenock business reveals it is now delivering over one million passenger trips per week and that any partner would have to meet its ambition to deliver the best possible journey experience for the customer.

“We feel that we found that with FlixBus,” Ralph says. “We’re more like a partner, not just a franchisee. We feel included in terms of planning and how things happen. It’s a very happy relationship and we’re keen to move forward into the next phase of growth.”

Crucial in identifying and establishing partnerships for FlixBus, according to Andreas, is having operators that share the same ethos on quality. This has been reflected in McGill’s, both with the care demonstrated by drivers and their delivery of customer service (Andreas reveals it was a McGill’s driver that won the nomination for best driver on the FlixBus network) and McGill’s achievement of having one of the highest rated net promotor score lines, not just in the UK, but on the global FlixBus network, meaning it has one of the highest levels of passenger satisfaction. “That attention to detail and focus on quality has been a key component of expanding this partnership together with McGill’s,” says Andreas.

Reaction within Scotland to the network demonstrates clear “latent demand” for new coach travel in the marketplace, according to Ralph. Comparing growth of the Scottish lines in terms of passengers numbers with other FlixBus lines in the UK and globally, Scotland has demonstrated “fantastic growth” both in terms of new passengers and returning passengers. For Andreas, this is both driven by the existing network and awareness of the FlixBus brand, and the high service delivery through McGill’s.

Ralph adds that there is even an appetite among drivers, helped by McGill’s decision to put drivers through Scottish Vocational Qualifications (SVQs).

“We approach coach operation the way we approach bus operation,” says Ralph. “We demand the highest calibre. We’ve gotour own three internal training academies, and one of the things we are doing with coach drivers is putting them through SVQs rather than relying just on a driving licence, Driver CPC, and other training that would be involved in customer services.”

That, he adds, delivers a calibre of long-distance coach driving “at the top where it belongs.” 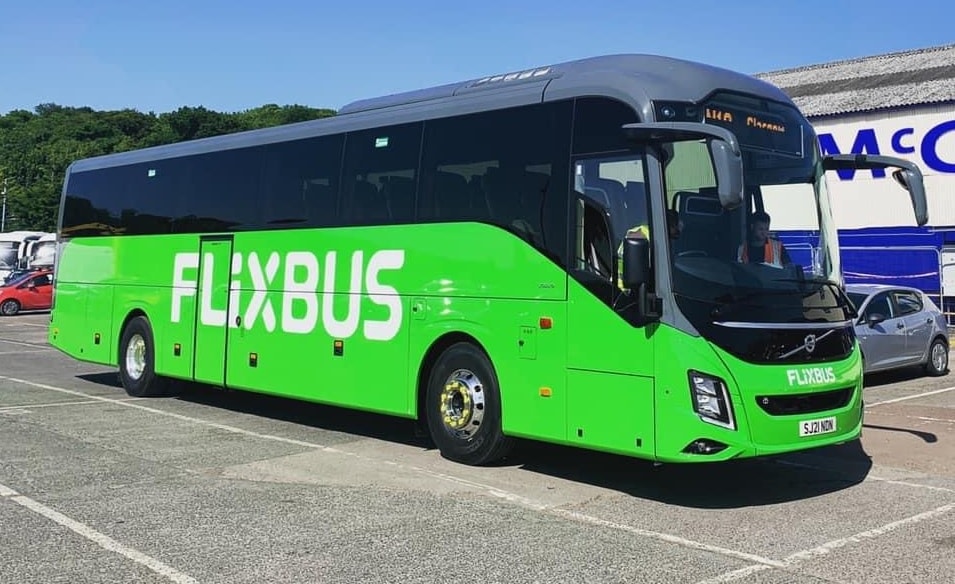 McGill’s and FlixBus have partnered with Volvo for the new vehicles due to enter service on the expanded network. That makes it a “tripartite approach”, according to Ralph, with an investment into after sales support and uptime commitment from Volvo into the project.

18 vehicles will join seven already being used on the existing FlixBus-McGill’s partner network, bringing the total to 25. According to Ralph, all 18 vehicles being added will be Volvo 9700 models. Eight will be built on the current generation B11 chassis, while 10 will use the new B13 chassis. The latter are currently in build, and will bring even greener credentials to the network, with lower emissions and better fuel economy following “key improvements” to the driveline and technology.

That decision to choose Volvo comes after what is believed to be the UK’s first 9700 PSVAR-equipped coach was bought and operated by McGill’s with FlixBus on the initial Glasgow-Edinburgh-London east coast line. Both parties believe Volvo brings the “quality and support” needed to build robust intercity coach lines.

“The reason for the choice of Volvo in the UK is multifaceted,” adds Ralph. “There’s a product, the specification, and there’s the support, commitment, and buy-in from the manufacturer, in terms of service delivery, uptime availability, and making it work seamlessly.

“It’s a whole package and very holistic view in terms of the procurement, the servicing, the quality, customer experience and the backup – because running intercity coaches is not an easy thing to do, and coaches need to be tip-top for every mile they operate – and that is a lot of miles over the course of a year.”

The choice to expand on the partnership goes back to FlixBus’ long-term goal and its partnership approach of making decisive moves when “the right partner” comes along. But Ralph describes both organisations as prime movers that oppose any “wait and see” attitude. He argues there is a real chance to define the 2023 coach market by taking advantage of recent disruption among intercity rail services, and pressure on household budgets.

“You have to accept that there is a risk involved in all business,” he says. “But you also have to trust in your skills, judgment and teams in order to get business right. We’re looking at market conditions where, in terms of intercity travel, disruption is on everyone’s mind, and people are losing confidence in rail. People are also looking for better value for money, and one of the key things that FlixBus delivers is value for money at high quality.

“Of people that are trying coach travel for the first time, we’re getting good feedback. It’s a common comment that people find coaches comfortable and quick. They’re not trading too much time or quality. That’s an opportunity to redefine and drive the market.”

Andreas also points to a “phenomenal opportunity” for the industry to show what a fantastic transportation mode coach travel is – and that it needs to be prepared to have the capacity and supply to meet growing demand as the present situation continues. “That’s something we are really looking forward to in 2023, to continue leveraging the success of 2022 and making the most of the opportunities that are coming,” he adds.

The Scottish coach market also presents unique opportunities from McGill’s perspective. That includes the sparse rail network outside of the urban belt, in which areas intercity coach becomes even more competitive with rail and car.

There is also positivity about the Scottish Government’s view of travel for under-22s and over-60s, which creates travel patterns potentially absent in other areas of the UK and which raises questions of how those patterns might change over the coming years. “That creates an environment where we believe that 2023 should be a buoyant year of growth,” comments Andreas.

In the meantime, FlixBus continues to prepare for its second anniversary in the UK and its 10th anniversary globally – promising much positive news as the year progresses.