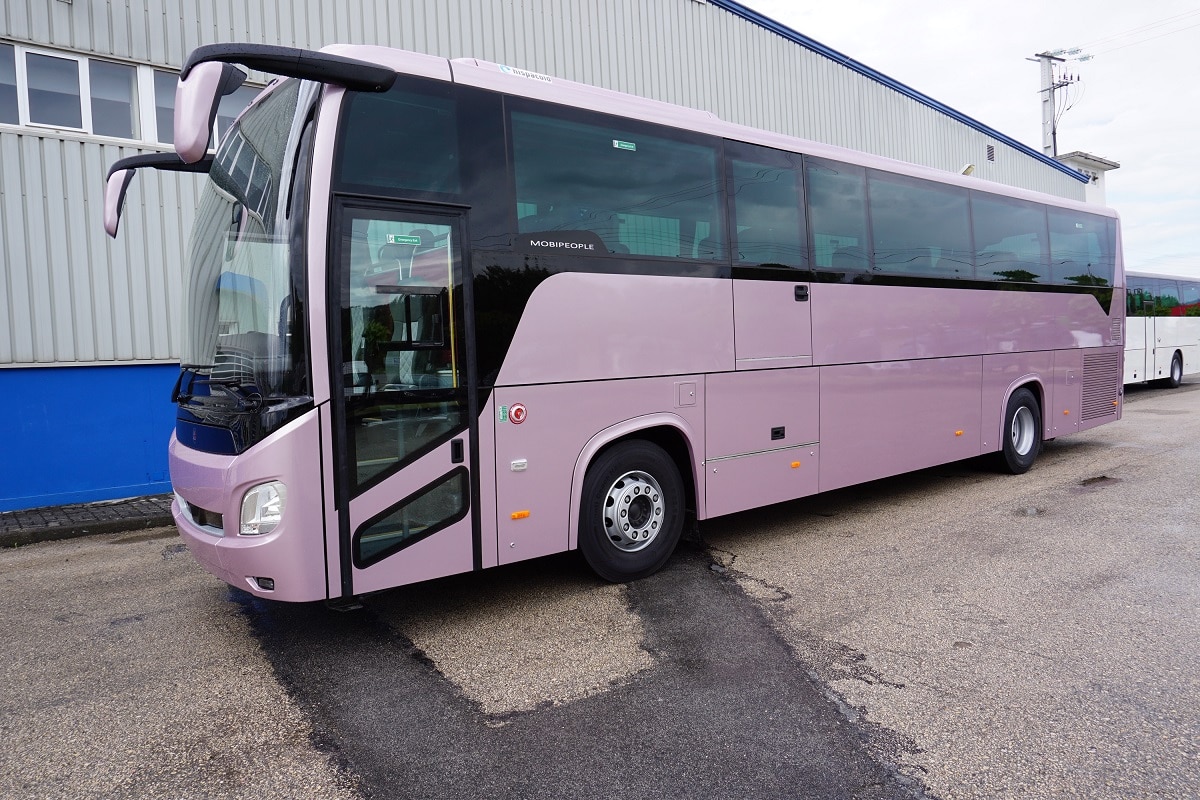 The first example of the newly developed high-floor, executive-specification MOBIpeople body has been completed at the bodybuilder’s factory in Portugal. It is built on an MAN RR2 chassis.

The coach is destined for Anthony’s Travel of Runcorn. UK MOBIpeople supplier BASE Coach Sales will deliver it after conversion to team transport specification by AD Coach Systems.

The model has been in development for over a year. It follows 2019’s launch of a higher-floor variant of the established Explorer. The newcomer will be available with up to 57 seats. PSVAR compliance is an option, with a floor-level toilet and combined with a 55-seat capacity also available.

BASE says that the MOBIpeople high-floor model’s 3.75m height also allows for substantial luggage capacity without the need for a three-axle layout. It is 12.5m long.

Anthony’s Travel Managing Partner Richard Bamber explains that despite the coronavirus COVID-19 pandemic, the Cheshire operator “was, with BASE, determined to push ahead with this project.”

He adds: “We mustn’t lose sight of planning for the future and we must not just focus on today, no matter how troubling that is. This coach is something that we feel brings much-needed positivity, not only to Anthony’s and BASE, but to the industry in general.”

Mr Bamber was part of a small group of operators that contributed to the design specification of the new model. That has led it to be “a truly bespoke product,” he adds.

Tranmere Rovers FC will be the primary user of the coach, but it will also be utilised to carry some of Anthony’s Travel’s portfolio of other sports team clients.

Conversion work at AD Coach System will include the addition of eight tables, a kitchen, additional fridges and TV streaming. The vehicle will also gain fittings that are part of the operator’s standard specification for all its coaches. Those include an Alcolock UK breathalyser, a Synectics CCTV and telematics package and a Wheely-Safe wheel loss and tyre pressure monitoring system.

Meanwhile, MOBIpeople and BASE are upbeat about the Portuguese marque’s future here. MOBIpeople General Manager Antonio Catarino says that it hopes to see its 200th coach for the UK supplied later in 2020.

“We are delighted, during this time of international crisis, to be able to complete and deliver the latest addition to our model range.

“We have worked closely with BASE and a number of its customers to deliver what we believe is an excellent balance between attractive styling and class leading functionality.”

In addition to being available on the MAN underframe, the new MOBIpeople model will eventually be offered on a Scania chassis.