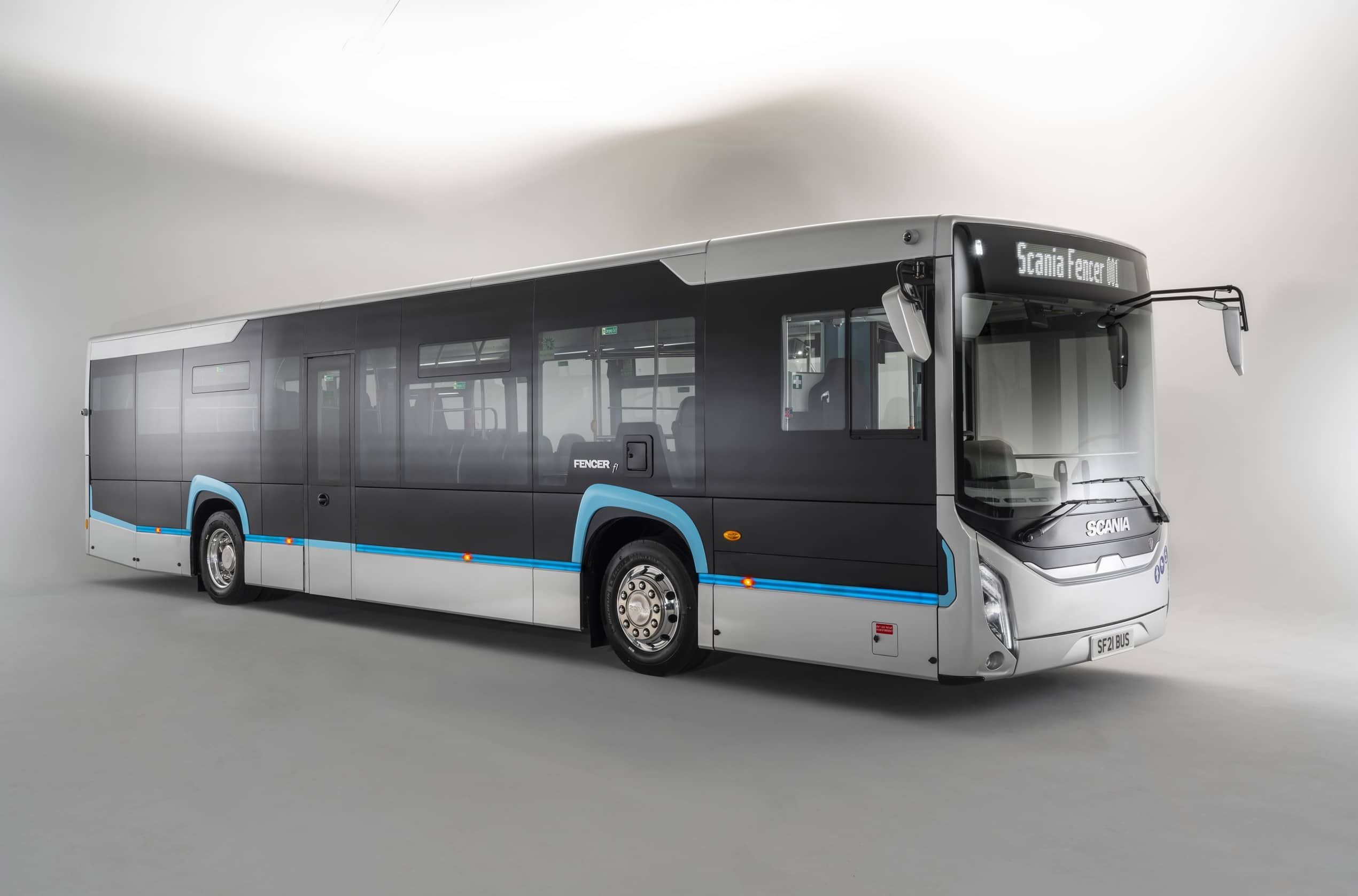 Scania has chosen the UK to launch the first variant of its all-new Fencer range, which it says will soon offer “a solution for every bus fleet operator.”

The Fencer platform is made up of a new modular chassis and a new body. While the first Fencer to debut is a single-deck f1 variant mounted on an existing diesel-powered chassis, Scania says that the range will quickly grow to capture alternative energy sources including battery-electric, diesel-electric parallel hybrid and biogas.

Introduction of a battery-electric Fencer will represent a first for Scania in the UK. It will be available to order later in 2021 and will utilise a driveline that is produced entirely by the Swedish OEM. Scania will produce the batteries, the 300kW motor, a two-speed gearbox and the drive axle. The first battery-electric Fencer for the UK – a demonstrator – will arrive by Q2 2022.

Higer will body the Fencer range in China at a factory dedicated to its partnership with Scania. While initial focus is on the single-deck range at 10.9m and 12.2m, Scania has already confirmed that a double-deck variant with the same drivetrain options will follow, as will an articulated version, among others.

“This is the future of Scania buses in the UK,” says Scania (Great Britain) Power Solutions, Bus and Coach Sales Director Martin West. “We are the first market to launch the Fencer and that is hugely exciting for us.”

Adds UK Bus and Coach Fleet Sales Manager Mark Oliver: “The Fencer heralds the start of a new era with a range of complete Scania products. It is future proof and a bus platform for all applications.” Mr Oliver adds that the battery-electric Fencer “is Scania through and through.” It has been subject to extensive climatic testing, and to ensure that it satisfies both urban and interurban operations.

First Fencer out of the Scania blocks is for the UK

It has been mounted on a chassis from Scania’s existing range to allow the body to be shown to the industry, but the next Fencer to be constructed for the UK will be on a new diesel chassis.

There may be a degree of surprise that diesel features so prominently in the Fencer range. Scania predicts an ongoing medium-term call for new diesel buses, although it is difficult to predict exactly how long that will last for, says Mr West.

The Higer-built bodywork will be customisable to suit the buyer’s needs. One- and two-door options will be available, along with seatbelts if required. Higer can also fit rear-view cameras in lieu of mirrors as an option and Scania says that the cab has been redesigned to improve ergonomics.

Diesel Fencers will initially come with the five-cylinder, 9.3-litre SCR-only DC09 engine at Euro 6 step e, but the model will later be available with the six-cylinder, 6.7-litre DC07 that was developed with Cummins.

The ZF EcoLife 2 gearbox will be used. When all in the driveline is combined, Scania says that the diesel Fencer will be capable of achieving “substantial fuel savings” over its predecessors.

Scania is particularly proud of the battery-electric option that the Fencer will bring to the UK market, and it adds that hydrogen fuel cell-electric power for the Fencer is likely to be examined in due course.

Notably, the manufacturer promises that its diesel buses’ established solid performance will be translated to zero-emission.

Battery-electric Fencer models will be plated with a GVW of 19,500kg and they will have a front axle tolerance of 8,200kg.

Scania says that a vertically integrated specification and production process for zero-emission Fencer models will see them built to suit the buyer’s operating requirement.

In particular, the OEM will look at all charging options and at what the best method of battery and infrastructure ownership will be for each customer. The battery-electric bus will be eligible for Scania’s repair and maintenance package, although how that will be structured it yet to be finalised.

Well-to-wheel (W2W) emissions are key to Scania’s thinking with the Fencer. The manufacturer has a firm commitment to, and targets for, sustainability. W2W figures prominently in the third part of the scope of that work. That governs what the OEM terms “indirect downstream” activities, i.e., use of its vehicles by the customer.

The contribution that biogas can make to W2W emissions is already well known. Mr Oliver is a strong advocate of it as a power source, having worked with several UK customers to place a significant number of biogas-powered buses. He notes that such technology is reliable and well proven.

But Scania is mindful of the rapid rise of battery-electric power and its impact on W2W emissions. The OEM has a partnership with fellow Swedish company Northvolt, which describes it mission as “to build the greenest battery in the world.” That will allow traceability of all batteries used in battery-electric Fencer models.

The Fencer double-decker will offer the same powertrain options as on single-deck variants. It too will be bodied by Higer, although the Fencer chassis range will also be made available to other bodybuilders.

All Fencer models will be fully supported by Scania’s network of 84 UK service centres. That arrangement will operate on a ‘hub and spoke’ basis, where 20 specifically located centres will have a greater technical capability for passenger vehicles.

Operator training will be delivered at Scania’s centre near Loughborough and it will hold a central stock of parts for both the body and the chassis.

Watch a video of the Fencer’s debut here.