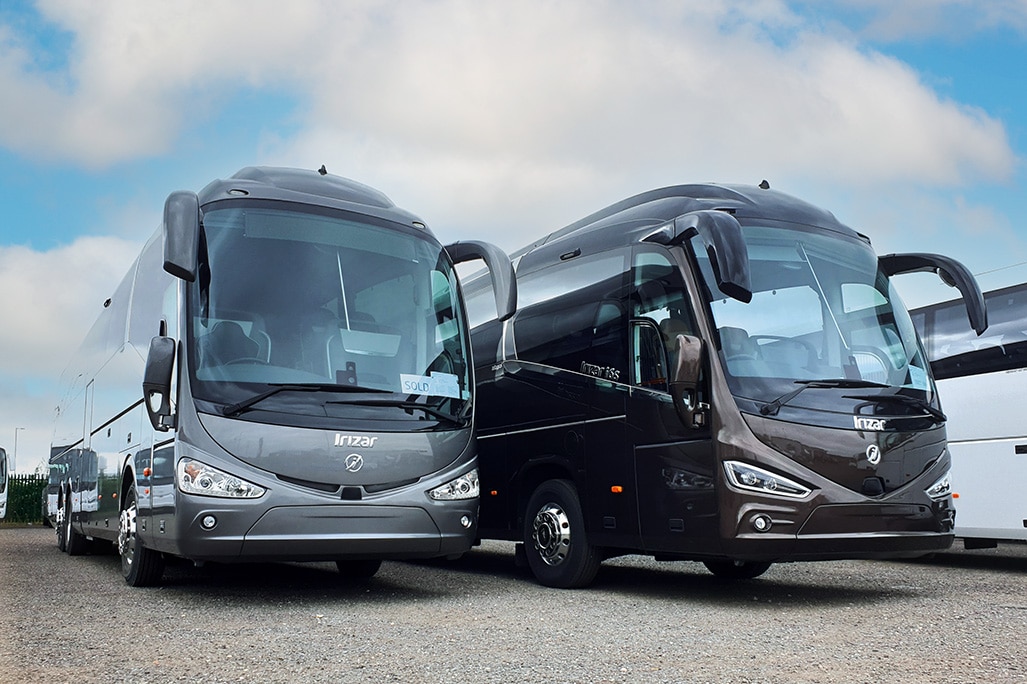 Irizar UK’s 10th anniversary in August was an opportunity to reflect back, particularly on recent years – but it was also a positive time to look to the future of the business

Celebrations for Irizar UK’s 10th anniversary were muted in late August, but the mood was up as operators, suppliers and colleagues united at the manufacturer’s sales centre in Blyth, Nottinghamshire.

The timing of Irizar UK’s 10th is not only a milestone birthday for the manufacturer; according to Andrew, it coincides with the industry emerging from what is arguably its darkest time. “It’s a time to take stock, reflect on how we’ve reached this point, and reflect on the fact that we’ve come through – relatively unscathed – a very difficult phase. Now it’s time to look forward with optimism and excitement.”

Resilience, supporting customers and standing by the value of a product has seen the company through that phase, adds Sales Director Julie Hartley.

While the market is still fraught with difficulty, there are green shoots of growth. A number of test drives and the sale of an accessible 14-metre Irizar i6 to Keepings Coaches in the Welsh Valleys, due to go into service in September, are signs of that growth. There has also been a resurgence in the amount of conversations with operators.

According to Andrew there are operators now talking about new vehicles, and some for orders to be delivered in March 2022. “It’s the forward confidence that’s the positive,” Andrew says. “There are operators out there that are thinking ahead, and have got the confidence to start talking to manufacturers about taking vehicles. I can only see that generating an upward cycle in the industry. Confidence breeds confidence.”

In practice, Irizar UK is still making pragmatic decisions about some of the offers it receives on vehicles. That is not surprising; other coach dealers will be in the same situation. The supply of vehicles versus demand is still “out of sync” according to Andrew, which means residual values are still down. “Operators are sharp business people and they understand this,” he adds. “That’s why we’re engaging in sensible conversations and coming up with pragmatic price point decisions which stimulate business. And we can do that for a certain amount of time.”

Residual values will harden as that supply and demand returns to equilibrium. When that might be is difficult to answer. Volume in the second-hand market is “undoubtedly moving,” Andrew points out. But his concern now is that government support is being tapered down through to the end of September. “Operators are going to start facing the full operating costs of their business,” he adds. “If they don’t have the income to support that overhead there is a possibility some may not survive. That’s a dark scenario, because that will mean an extra influx of vehicles onto the market again, which will set supply and demand back.”

Andrew continues to be a proponent for a government support package to remove older, polluting vehicles from the road to encourage newer vehicles.

Appetite for such a scheme would depend on whether it delivered a fair value. “But as a concept, particularly with the desire to move to more environmentally sustainable vehicles, removing the older stock from the industry would help.”

One issue that has come very much into focus in the past 18-24 months and poses a topic of discussion for the future is PSVAR. Last year the manufacturer took a strategic decision to undertake its own conversions in Spain, feeling that such an approach would deliver the best possible conversion.

Andrew now suspects as much as 90% of new activity in coach sales or expressions of interest are for PSVAR compliant vehicles.

“Operators are futureproofing their assets,” suggests Andrew. “Even if they might not necessarily need PSVAR for their current portfolio, many can see the industry is moving down a certain path. To protect the residual value of that vehicle, and making sure it is flexible enough to be allocated onto PSVAR contracts, it makes sense to get that built in. “The price point of specifying PSVAR as part of the factory production is more favourable than retrofit.”

If the birthday was a time to reflect on the previous 10 years, equally it was a time to look towards the future. And it isn’t just the standardisation of accessibility that Andrew feels will transform the next decade. It will also be driven by new vehicle technology. “The industry is going to evolve at a pace that we have perhaps not seen before, driven essentially by the move to alternative fuel and zeroemission vehicles,” he says.

Anticipating a mix of battery-electric and hydrogen fuel cell-electric vehicles in the marketplace, that future is as yet not wholly defined. But noise is being made on where certain technologies will be applied to certain applications.

That includes confidence that hydrogen presents a solution to longer distance operations. “And as we come out of the shadow of COVID-19 and we move through to midpoint of this decade onwards, I think we’ll see the pace in terms of development of zero emission  vehicles move significantly in the truck sector, and this will cascade into coach,” he adds.

For now, Irizar UK continues with the ambition to enhance its market share. Andrew says his goal as MD of the UK business will be to build on the foundations laid over the last decade and take the business forward from “its teenage years into adulthood”. But a buoyant market will be what helps it achieve that objective.

That, at the moment, seems to lie at the passenger end of the supply chain: “I almost think it’s about consumer confidence and it’s about making sure people are feeling comfortable to get on a coach or bus for whatever purpose that might be. Once people get back on coaches, once they have a positive experience, once they feel they’re in a confident professionally managed environment, I think that confidence will start to perpetuate.”

As that confidence builds, he adds, the benefits will flow back through the supply chain that sits behind it – from the passenger to operator, operator to parts suppliers, parts supplier to vehicle manufacturer.

“It’s a great product, it’s a great brand, and we’re operating in an industry that, once that confidence returns, I’m sure will be a great place to be,” he adds.

EO Charging: Looking to grow in battery-electric bus and coach