The pandemic has renewed conversations around mental health. Kathryn Pulham suggests a way operators can safeguard their staff

On 13 January Kathryn Pulham jointly hosted a session at the Confederation of Passenger Transport Bus and Coach Conference examining the impact of COVID-19 on the industry’s people and culture.

Kathryn’s message is that there are many small, inexpensive changes operators can make that can seriously affect the mental wellbeing of their staff and provide the right avenues for help.

With the toll of COVID-19 not yet known, but making its impact felt across the workplace, discussions on mental wellbeing are as relevant as ever. Pulham’s has long pioneered its own methods to look after staff wellbeing and improve staff retention. The Bourton-on-the-Water operator began looking at a mental health programme under Kathryn’s leadership after she joined the business in 2008 alongside husband Andy. The programme officially began in 2016 and has successfully changed attitudes within the company’s workforce.

Kathryn sees her role within the coaching community as a way to open up options for coach operators which don’t have initiatives in place when it comes to protecting staff mental health wellbeing. Her own background comes not from within the coach industry, but in psychology and community welfare.

Having completed a degree in psychology in 2001 with the aims of being a clinical psychologist, Kathryn spent a number of years working with older people, young offenders and young homeless people under local authorities while preparing for a PhD. Those plans did not come to fruition after husband Andy requested her assistance following a buyout of the Pulham’s coaching business. “My husband was joint Director at the time and his partner wanted to step back from the business. It was all or nothing. Taking on a business isn’t a light decision and it is a lonely place to be on your own.”

Ultimately, Kathryn left her career to work full time alongside Andy. But their efforts were rewarded: “We put our heart and soul into the business and grew it not just in commercial turnover but in terms of its compliance, awards, and the foundations that sit beneath the business to make it as strong as it is.”

With her involvement in building a positive workplace and background in psychology and care, Kathryn soon recognised some of the challenges facing an industry that is predominantly owned by independents. “It’s a tough industry to be in. We’re busy trying to recruit and retain staff while being operationally focused. It’s easy to get tied up in the day-to-day running of a business, struggling with recruitment and workplace sicknesses. It’s important to step back from that at some point and consider how your staff feel about their workplace and the workplace culture.”

Discussions about staff mental wellbeing should be as important about discussions on diversity in the workplace or health and safety policy, Kathryn argues – especially since those latter topics are now a given part of any business. “The number of people presenting to me with some kind of anxiety or depression, or simply asking for help, has increased tenfold from ten years ago. That tells me there’s a need for it, and as an employer we have a responsibility to our staff to make sure we encourage them to look after both their physical and mental health.”

Of course, no employer is expected to take on the responsibility of therapist. What is important is to offer staff a place where they do not feel judged, while providing the resources necessary to put them in touch with the right people that can help. Kathryn reveals that the resources made available through mental health first aid training are vast.

Mental health first aid training is a simple procedure to put resources in place to keep staff safe. It involves a couple of days depending on workplace needs. “It opens up the door and I believe it has had a big impact on our recruitment and retention,” says Kathryn.

The training primarily uses professional websites. The first thing a mental health first aider does is to encourage someone to go to their GP if they are struggling with their wellbeing. Not everyone wants to do that, so a bank of backup resources is needed, and mental health first aid training provides that. Kathryn has taken this one step further using links with her charity Headspace. Gloucestershire provides its own suicide crisis centre which offers resources for helping people through that particular crisis.

“For me, it’s about finding a bank of resources that allows you to give people what they need and making it available to them – they can then choose what resource feels right,” Kathryn says. “That is perhaps going one step further than a mental health first aider, but that’s because we have quite an extensive program and we have experience at it.”

A good time to talk

On 1 February, Pulham’s hosted its first ever wellbeing week, with one-to-one appointments held with as many staff as possible. The sessions took place primarily online due to COVID-19 restrictions, but special provisions were made if that was not possible.

“With many staff furloughed right now, it’s really important to open the door and give them space to be listened to and talk about any issues that are causing them concern,” Kathryn explains. “That is particularly poignant at the moment. Our staff are not used to being at home – they’re used to being out on the road, and the pandemic has put them in an awkward position.”

“It might not be talked about the same way, but I can see COVID-19 being a crisis for people for possibly another five to 10 years”

While there have been some positives from the pandemic, such as some staff taking the opportunity to reassess work and look at new directions, for many, furlough has been an unbearable thought. “They have begged me not to be put on furlough – they enjoy being at work and need that routine,” Kathryn explains. “Some staff need people in their daily lives. Those who have to be furloughed because there is no choice have often struggled to be at home – not only having lost their routine, but also worrying whether the company will survive, whether redundancies will be made, how much of their earnings they will be taking home. The impact of the pandemic has been huge.

“I think people will be pleased to come back to work, but I think the effects, both mentally and the knock on people’s resilience, is going to be seen for some time. Years into the future, I can see this being a bigger crisis. It might not be talked about the same way, but I can see COVID-19 being a crisis for people for possibly another five to 10 years.”

A driving factor behind the wellbeing week was also time. Time is the best gift managers can give to their staff, according to Kathryn, and when given can go a long way to making employees feel valued.

Getting men to talk has been a big factor – especially since they make up the majority of the workforce. Prior to the mental health programme, Kathryn reveals they struggled to get their male staff to open up. But they have now begun to take advantage of the resources available.

While Kathryn has many more ideas to bring to Pulham’s, she remains focused on Headspace. “We’ve got a good mental health programme here at Pulham’s and I’m happy with it at the moment, though there’s always more you can do. Our next step will be to look at mental health awareness. We all need to look after each other, and through the pandemic everyone has been talking about the #bekind movement. We need to ask what we need to do as individuals to open ourselves up to those who need our support and be properly trained.”

What are the barriers to putting in place a robust mental health wellbeing policy? For one thing, Kathryn doesn’t think mental health is given the platform it deserves. “That’s not just in our industry, that’s across businesses as a whole,” she says.

Turning that around might be easier than it first appears, especially for the coach industry, where directors and managers are typically unafraid to roll their sleeves up and get involved in day-to-day operations, and know staff personally. “As independent operators we are very much involved with our staff. We go out and drive. I fuel and clean my school bus like everybody else, and that environment is conducive to allowing people to see you as a colleague rather than as a CEO,” Kathryn says. “That allows people to think it’s OK to open up and talk to their boss.”

And the more staff talk, Kathryn says, the more talking about mental health wellbeing becomes acceptable. “A lot of my staff say it’s a very different environment here to other places they have worked. And I believe that’s because we genuinely care for our staff and we listen to them.” 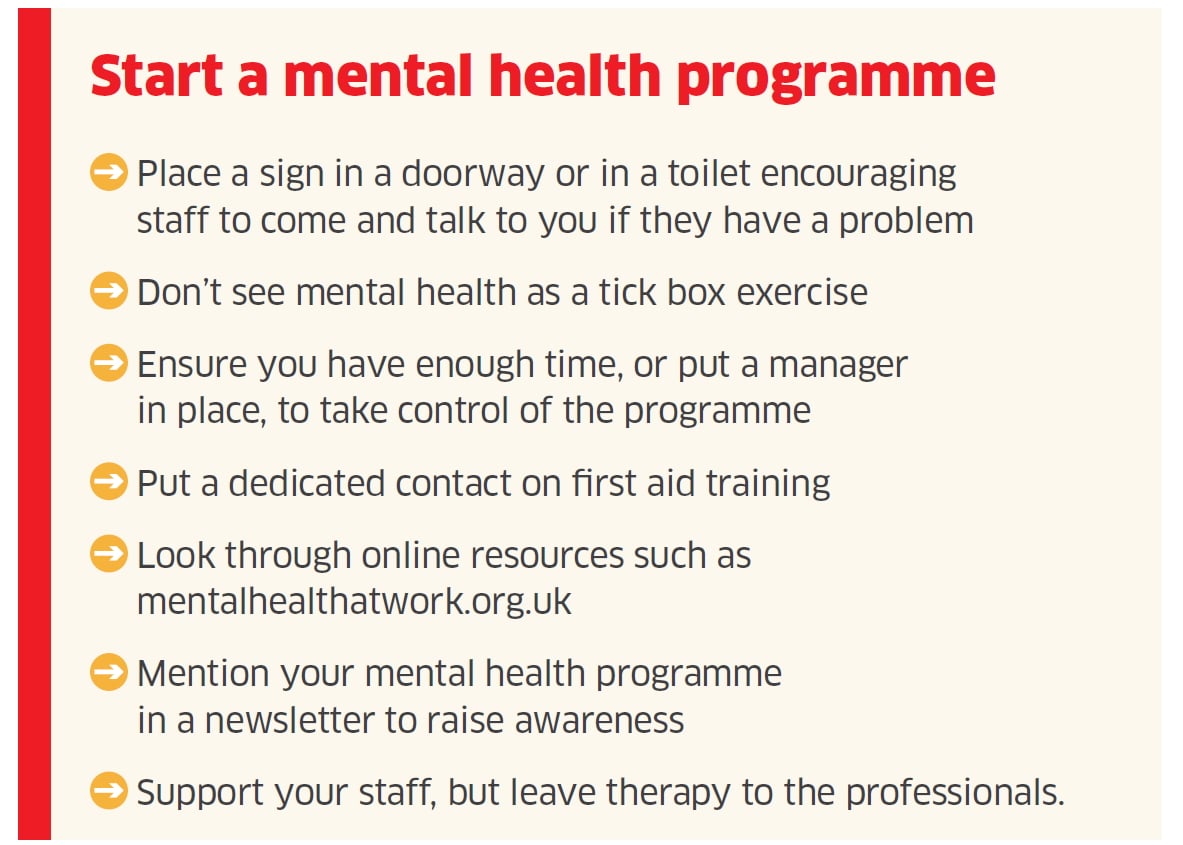