Home Features Seeking clarity on the safety of smart motorways 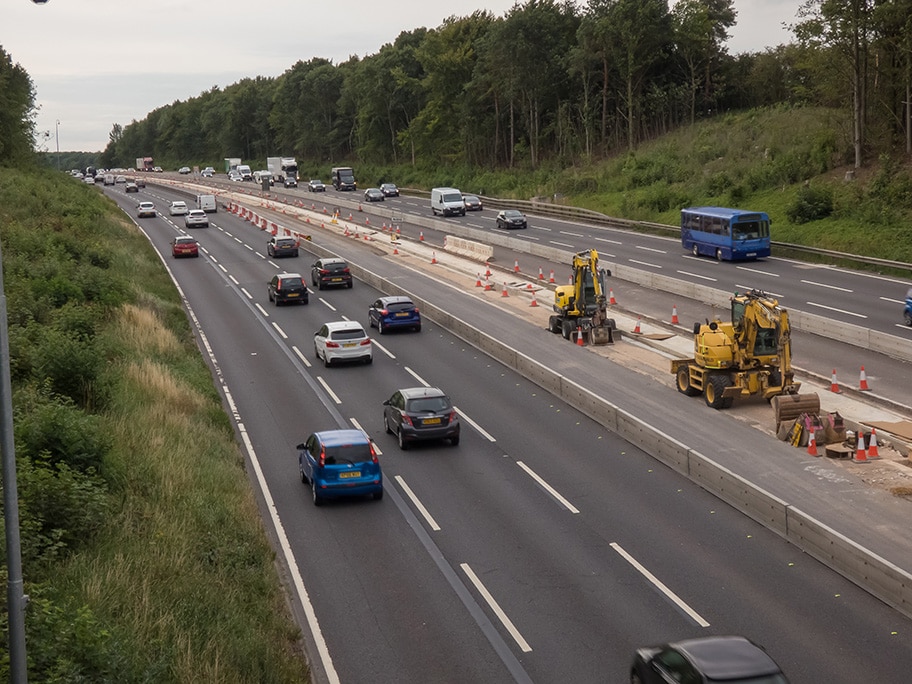 In response to one reader’s request for guidance, routeone examines the safety advice for PSVs carrying disabled passengers on smart motorways

The safety of Britain’s smart motorways was under scrutiny once again at the start of February during an episode of BBC’s Panorama programme, Britain’s Killer Motorways?

It follows the halting of the smart motorway rollout after a government review was launched into their safety. One reader of routeone recently requested clarity on the official advice being given to coach operators should they experience a breakdown on a motorway without a hard shoulder – specifically, while carrying disabled passengers.

To find out, routeone approached both Highways England and the Disabled Person’s Transport Advisory Committee (DPTAC) to get the full perspective on the safety of smart motorways, whether disabled persons with mobility issues are being put at additional risk to non-disabled passengers, and how operators should react if they find themselves with a vehicle broken down on a motorway without a hard shoulder.

According to Highways England, the government’s 2020 Smart Motorway Evidence Stocktake report established that in “most ways” smart motorways are “at least as safe as, or safer than, the conventional motorways they replaced” – but not in every way.

“We look to improve safety for all road users, particularly those with additional needs,” says Jo Gray, Media Relations Manager for Highways England. “We are committed both to meeting the needs of disabled road users – and to providing further information for all road users to help them feel safe and be safe on all our roads.

“All our roads are built in line with disability legislation and we have worked with Disabled Motoring UK to provide advice specifically for disabled people. This is in addition to the advice in the Highway Code.

“We also have a representative from the Roads for All Forum group on our Smart Motorways Advisory Panel and are listening to, and engaging with, customers and users in the equality, diversity and inclusion space.”

Highways England makes its advice on PSVs with wheelchair lifts plain: They must not be used on a road with moving traffic. “Using a wheelchair lift is only something that should be done away from moving traffic, in a car park or motorway service area for example,” Jo says.

And while there is no specific advice given by Highways England to passengers of PSVs, guidance remains the same as advice given to motorists with mobility issues, and according to Highways England, is “equally applicable” to those with mobility issues and those without. It is also applicable to all high-speed roads, including A-roads, traditional motorways and smart motorways.

The advice below was published after a recent public information campaign. Drivers or travellers with mobility issues should:

But are passengers safe enough? Publicity has been given to inadequate radar coverage in detecting and managing incidents on smart motorways (one freedom of information request revealed that the radar system covered only 7% of the UK smart motorway Network in 2020) but Highways England assures routeone that control room operators are “able to move and zoom the CCTV cameras” to monitor and manage incidents. “The cameras give a bird’s eye view of what is happening which helps the operator to decide on the support needed,” says Jo. “Once they’re aware of the situation, they can set overhead signs and close the lane to keep traffic away.

“CCTV cameras on the all lane running (ALR) sections (where the hard shoulder has been converted to a permanent lane) work at night using infra-red technology. The control centre can also send a Traffic Officer or the police to help and can assist you to re-join the motorway when appropriate.”

Jo points to the system of inter-related features, which include signed and orange-coloured emergency areas set back from the road to provide greater protection than a hard shoulder and with telephones linking directly to control rooms, which are designed as a safety measure on ALR motorways.

“These emergency areas are for when a driver has no alternative but to stop and it has not been possible to leave the motorway or reach a motorway service area. They are approximately 100 metres long (the average length of a football pitch) by 4.6 metres wide and set back from the main carriageway. They are wider than hard shoulders by 33% so are more suitable for alighting from a vehicle (if this is possible).”

According to an AA report, the standard for all new Smart Motorway schemes from 2013 onwards set emergency refuges on ALR motorways 2.5 km apart.

Despite the safety assurances from Highways England, Helen Dolphin, who chairs the Personal Mobility Working Group of DPTAC, has described the situation as “unsatisfactory”.

She reveals safety among travellers with mobility issues has been on the radar of DPTAC since the introduction of smart motorways, and that there has always been a lack of a satisfactory answer to the safety of those with mobility issues caught in breakdowns: “Even on motorways with a hard shoulder, to get someone out of a vehicle who is a wheelchair user you would still have to shut one of the lanes – there is not enough space. For me, it has never been a satisfactory way to evacuate on a motorway.”

Helen argues that the introduction of ALR motorways has heightened the danger already present for those users, particularly insofar as there is a lack of choice for those with mobility issues where evacuation is more dangerous than remaining within the vehicle. “Before, you perhaps felt a bit safer staying in a vehicle on a hard shoulder,” she adds. “Staying in a vehicle with a seatbelt on in the middle of a motorway with cars running past either side of you, you perhaps wouldn’t feel as safe.”

It is not for DPTAC, she concedes, to find the solution, or to suggest changes to motorway structures. But DPTAC continues to highlight the issues that the design has caused. “We do need better guidance and we definitely don’t want to see disabled people having a worse situation and a worse outcome than a fellow non-disabled passenger.”

What of non-disabled passengers on coaches? Richard Bamber of Anthonys Travel says it is very easy to come up with a solution on paper, but until such a scenario arises, it is difficult to say how an incident would play out.

“Does the incident happen at day, or night? What’s the weather like? What’s the safest scenario for the passengers? That has to be the overriding factor throughout. Because you could take people off the coach – when it is pouring rain, dark, not well lit, and that could cause more of a hazard than them remaining in the vehicle with the hazard lights on and the seatbelts fastened. We have got to assess it on a caseby-case basis,” he says.

But carrying disabled passengers throws in an added problem. In a scenario with good weather and visibility where passengers are able to evacuate a vehicle and stand behind a motorway crash barrier, Disabled passengers would have to be left on board the coach with nominated supervisors, such as the driver, until the Highway Agency or police arrive. “Ultimately, if you have to deploy a lift, and the lift overhangs another carriageway, it would result in more than one carriageway being closed,” Richard says. “There has to be that period of speaking to the appropriate services and assessing who the passengers are. Some are mobile to a degree, but some passengers will need the wheelchair lift without a doubt. It is a moving scenario.”

What Richard does acknowledge is that a hard shoulder on a traditional motorway, while not necessarily providing enough space to deploy wheelchair lifts, does offer a degree of safe space and manoeuvrability. “It would certainly give you greater confidence,” he says.

While Richard is not wholly against smart motorways, he welcomes the review and agrees improvements could be made – particularly in the number of emergency refuge areas. “I don’t think there has been enough thought put into what would happen if a big vehicle breaks down,” he adds.

Those thoughts are echoed by trade body RHA, which recently called for a change to the way in which Smart Motorways operate to support larger vehicles.

In a statement, Policy Lead on infrastructure Tom Cornwell calls for “improved infrastructure and operating practices” which includes larger, more visible and more frequent refuge areas to give more confidence to drivers, and restoration of hard shoulders at night.