Home Features Taking control of the future of vehicle testing 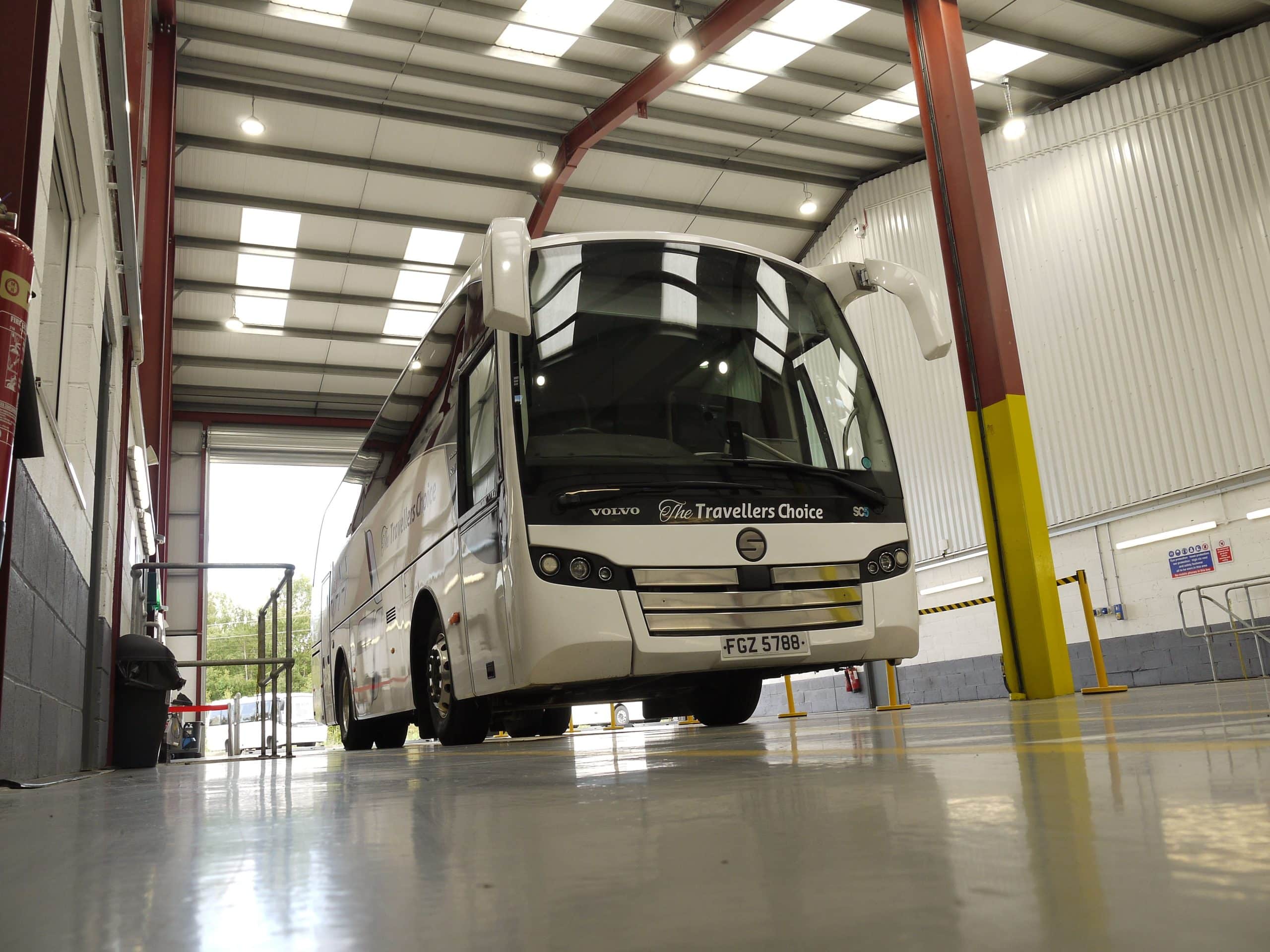 Maintenance and routine testing is an essential element of keeping any fleet safe and compliant. But the process of taking vehicles for test at an Authorised Testing Facility (ATF), and rectifying any issues that are found, can be a time-consuming and unpredictable process.

Bringing testing equipment in house is one solution that, for an initial upfront cost, can see cost savings and extra revenue streams open up for years to come. routeone visited one such installation in July at the Travellers Choice in Carnforth, undertaken primarily by Kismet Garage Equipment, which specialises in the supply and reconditioning of brake testing products.

Kismet and The Travellers Choice share a relationship that mushroomed from the supply of a brake tester in the early 1990s. The former has since supported the operator in its Carnforth and Dalton-in-Furness depots. The installation is easily described by Kismet’s founder Phil Stockford as state of the art – the company’s flagship installation and its first twin-bay site. Inside, two prefabricated inspection pits supplied by Premier Pits are complemented by Kismet-sourced emissions analysers, with brake testers, play and headlamp testers manufactured by VTEQ, and pit jacks.

The installation process began around three years ago when The Travellers Choice found difficulties with testing vehicles locally. It also had concerns that, due to extensions issued to operators throughout the COVID-19 pandemic, continuing peaks and troughs in demand for tests would prove troublesome, with September through November expected to be a particularly busy time.

“Since DVSA shut its own lanes, we relied on other companies and found testing was difficult at times, combined with the need to travel,” explains Workshop Manager Sean Lupton. “It would take half a day to get a vehicle tested, and other operators were not flexible. We realised we couldn’t continue like this.”

Once through the delays caused by the pandemic, the facility was completed in two phases, with the first bay completed in May 2021 and the second earlier this year.

Owing to the size of the investment of building an ATF, Sean acknowledges that making the new site commercially available to other operators will be necessary to make a return. Currently the facility is open for testing one day a week, and the company will expand as time goes on, with Sean’s intention to test for three days a week.

Taking back control of testing will of course benefit the maintenance and engineering side of the business by safeguarding The Travellers Choice against any future changes that may happen with testing. That is of a particular worry for Sean considering recent upheavals: “All we want to do is make sure that whatever happens going forward, we are in the driving seat,” he says.

“We don’t want to find ourselves in the difficult situation where it is even harder to get testing.”

In fact, a future where testing at home is the norm is not something unreasonable to the mind of both Sean and of The Travellers Choice Director Mark Shaw.

“I would say for a large operator, it won’t become essential, but a feather in its cap,” Sean explains. “We have the ability to move schedules around, whereas a local testing station would require a whole rake of phone calls. I can see at a glance what availability we’ve got in front of us. It’s all about flexibility, and the more testing days we do, the more flexibility we’ll have, which is what we want to be able to do.”

The construction of the new twin-bay facility at The Travellers Choice demonstrates not just the importance of taking control of vehicle testing and maintenance. It also reveals the benefits of establishing close relationships with companies that share a similar ethos.

Sean reveals it has always been more important to forge a meaningful relationship with a supplier than to focus entirely on cost. Often, working with a smaller supplier can be advantageous when it comes to flexibility and ease of communication. Unlike some of the larger competitors in the brake tester market, for instance, Kismet takes brake testers in part exchange – useful when it comes time for equipment to be upgraded.

“When you work with smaller companies, they consider you to be a good customer,” he reveals. “Your business is highly valued. I prefer to work always with businesses that are more like us in mindset. We do that within The Travellers Choice whether it be other garages, or other coach operators. You get a small family company, and give it the details it needs, the owner will often say they will see if they can work it in, and they’ll ring you back and fit it in for you.”

Scale is no barrier to that mindset, either. As The Travellers Choice has grown over its long history to employ 160 staff members today and over 100 vehicles, being a family-run business has helped it maintain the same ethos. “There is still a level of passion for the work we do which I think people only have when it’s their own business,” Sean says. “From our point of view, when you get helped out by someone, you need to help other people. We are spread all over the country and we’ll ask for help. So when people come knocking on our door, if we can – even if sometimes it doesn’t sit well – we will always try and help.”

That combination of similar mindsets, the willingness to be flexible, and excellent communication throughout the process means both Kismet and The Travellers Choice have achieved a project which, according to Phil, stands as one of the best examples of any ATF in the country.

“And it was a pleasure to do it,” he adds. “The result, personally, I think is spectacular. There may be others that are as good as this – but there will be none any better. It’s impossible to improve upon it.”