The Neoplan Tourliner is an established part of the coach market. To accompany Euro VI Step D, it saw some minor aesthetic changes. routeone puts a P20 model to the test

While the market for new coaches will be flat for the rest of 2020, a suggested increase in the popularity of ‘staycations’ could benefit the industry as the country sustains its return to normality. Such tour work mandates a coach of a certain standard. That is where MAN places its tri-axle Neoplan Tourliner models.

The Tourliner has long been part of the UK marketplace. As a product, it is versatile. It offers high capacities in both two- and three-axle formats. MAN already utilises a significant amount of technology to optimise fuel economy, and work to further that is continuing.

Previous experience of the D26 engine at Euro VI Step C demonstrated that the Tourliner is also a driver’s coach. It has now transitioned to the Step D version of the same unit. Torque and power have slightly increased. The Step D engine is additionally 70kg lighter than its Step C predecessor.

Tri-axle Tourliners come in the 13.4m P20 and 13.9m P22 variants. While most Tourliners are built to stock format, MAN also offers those that are constructed to order. That flexibility includes the opportunity to divert coaches via its Bus Modification Centre in Plauen should the buyer have highly customised requirements.

A number of stock Tourliners are present at MAN’s Trafford Park base and are available for rapid delivery. In August, routeone was able to put a P20 with the D26 at Euro VI Step D through its paces.

Changes to the Tourliner on the outside

The most noticeable update to the latest Tourliner is the arrangement at the B-pillar. The earlier version came with an angled cowling that interfered with the view from the front row. MAN’s revised design goes some way to mitigating that. A small lower window has been added, admitting extra natural light.

The test coach is equipped with conventional rear-view mirrors. Development work on a camera solution for this application is continuing. It has been delayed by both the coronavirus COVID-19 pandemic and ongoing improvements to the design.

Nevertheless, MAN Truck and Bus UK has reaffirmed that rear-view cameras will come to the UK. It is likely that a demonstrator Tourliner will be ordered with the equipment. Stock coaches may not be, but the set-up will be available as a retrofit kit. That will allow conversion prior to delivery for those customers that require it.

Another development with future Tourliner stock relates to PSVAR. All the next batch of coaches ordered will come with preparatory measures in place for them to comply should the buyer require.

Handrails in the Tourliner are already in accordance with PSVAR. Additional preparatory work will entail the installation of a high-level door in readiness for a lift, and floor tracking.

On three-axle models the lift is mounted over the drive axle. On the two-axle P10 and P21, it is above the steer axle. There is thus no compromise on luggage space in either application. Where fitted, lifts will be installed in the UK, as will destination display screens.

Specifying all future stock coaches with preparations for PSVAR is a bold move, but MAN believes that the call for compliance will grow significantly over coming years.

While accessibility may not be required for the coach’s first life, undertaking preparatory work for a later easy conversion eases the cascade process as a second life approaches.

Under the bonnet of the test coach

As tested, the P20 comes with the D26 rated at 470bhp and 2,400Nm of torque. ZF’s 12-speed Traxon automated manual gearbox is fitted. MAN’s experience is that Traxon, and before it AS-Tronic, is most popular in three-axle Tourliners. In two-axle models, the EcoLife automatic accounts for most sales.

Fitted to the test coach are EfficientCruise and EfficientRoll. They are software functions that utilise knowledge of approaching topography to enable the coach’s momentum to be best utilised when climbing or descending hills.

EfficientCruise allows the driver to set parameters according to which the set speed will vary in hilly terrain. When climbing, speed may be allowed to drop slightly where the software decides it is appropriate and efficient to do so. Pace is then regained after cresting the summit. When descending, the coach may overrun slightly to best use momentum, but only when appropriate.

Momentum is also considered by EfficientRoll. On mild downgrades, it sometimes engages neutral and lets the coach freewheel if it is judged most economical to do so. The gearbox and software ensure that the shift into neutral and the reselection of drive are smooth. In the test coach, it was impossible to sense that either had taken place without monitoring the tachometer.

Other considerations for economy include tall gearing. At 62mph in top gear the D26 is turning at just 1,100rpm. That takes account of the engine’s torque characteristics. The peak 2,400Nm comes in from just 930rpm, plateauing over a wide band to 1,350rpm.

As top gear can only be achieved at motorway speeds, the Traxon-equipped Tourliner is best suited to work as a mile-muncher. However, MAN offers the EcoLife in tri-axle examples for where the application may better suit a fully automatic gearbox.

The overall driving experience is positive. Although torque comes in very low down, Traxon is happy to take the engine a lot further around the rev counter if it allows a steep block shift to be achieved.

That is particularly useful when accelerating hard. But minimising the number of times that drive is interrupted when gaining speed also conserves momentum. As would be expected, the D26 pulls strongly from below 1,000rpm. Block shifts are thus accomplished without driveline complaint.

All these considerations put together combined to give impressive efficiency on the unladen test route. A mainly motorway section via the M60, M66, M65 and M61 saw a highly credible return of 12.6mpg recorded by the onboard computer.

Tourliner sees more restrained development on the inside 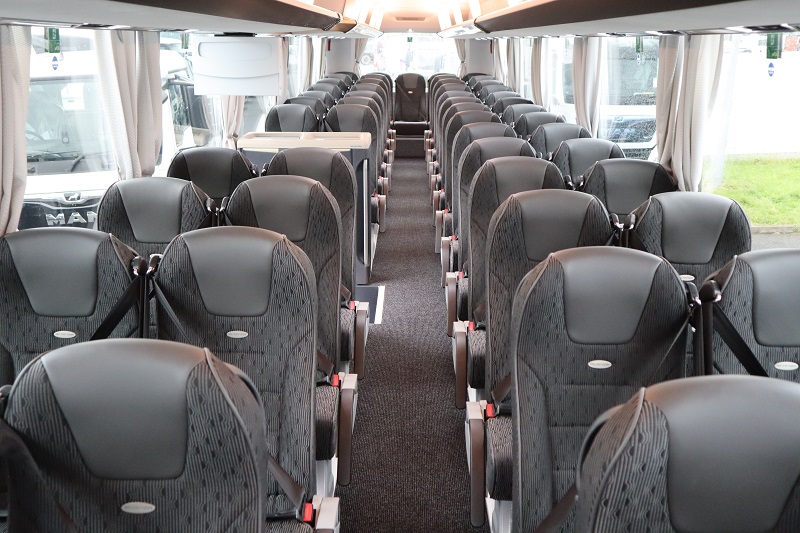 The new B-pillar arrangement and a Euro VI Step D engine are the main updates to the latest Tourliner. Inside, most remains the same, although a minor change has been made to the top of the servery. It now has two ‘place mat’ positions. The all-important sausage boiler remains part of the same unit. Minor tweaks have also been made to the passenger service unit (PSU) design.

As tested, the coach has 55 Brusa seats. Kiel is an alternative supplier. Lateral movement for aisle positions is included, along with, drop-down tables, magazine nets and USB charging points within the seat base. 240v sockets can be added as an option. Leg room is excellent.

The gangway is sloped at the very front, but by the third row of seats it has flattened to become level with the flooring below the seats. As a complementary specification for accessible Tourliners, MAN offers a floor-level toilet option. That work is carried out at Plauen.

Naturally, climate control is standard. The air-conditioning vents via the full length of each luggage rack and through the PSUs. Perimeter radiators are fitted and an auxiliary pre-heater is included.

Tourliner cab is finished to a high standard 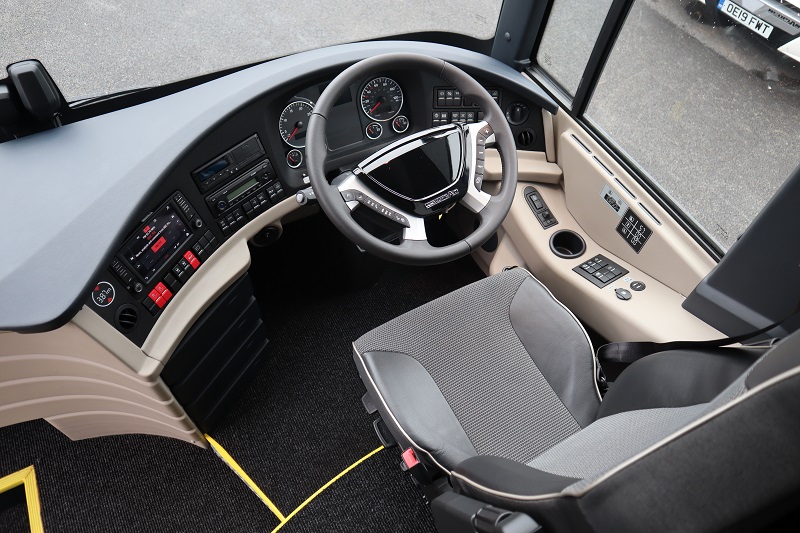 The standard Tourliner cab has been described before. It is a well-appointed place to work. Controls, dials and switches are marked clearly. A minor criticism centres on the gear selector; it is rotary and positioned in a spot next to the driver’s left knee, where it is difficult to see.

Other than that, the cab layout is good. The A-pillar is thin, aiding the driver’s view, and twin USB charging points are provided. The dash is a model of clarity and the multimedia control unit, with a colour screen, is useful. Besides controlling other functions, is also acts as a very clear satellite navigation system.

One of the other switches present is marked ‘engine off’. It does not govern an stop/start system, however. Instead, it allows the driver to stop the engine without interrupting power to any auxiliary consumers within the coach. A true engine stop/start function will come to the Tourliner soon.

Mirrors, the electric signalling window and the windscreen are all heated. A reversing camera is fitted as standard and the driver’s seat is a top-specification Isringhausen model with a heating element. 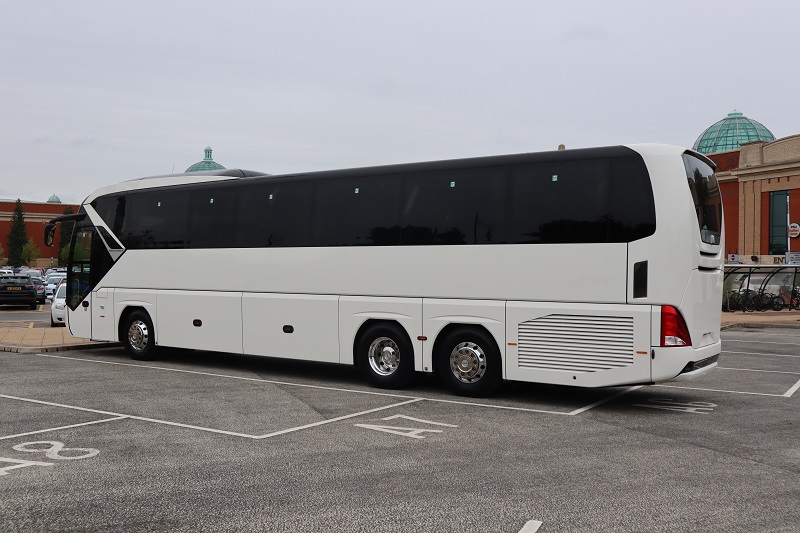 The middle of the market is well-filled with competent coaches that suit a variety of roles. The Tourliner is one of them. In tri-axle form and with the fuel-conserving technology that comes with Traxon-equipped examples, it is at the pinnacle of work being done by OEMs of diesel coaches to improve efficiency.

But that does not come at the expense of driveability. In Euro VI Step D form, the D26 continues its established flexibility and Traxon harnesses it well. The occasional hesitancy of AS-Tronic has gone, making Traxon comparable with the best of other manufacturers’ automated transmissions.

Further technology will come to the Tourliner range with MAN’s rear-view camera system. In LGV circles, where that move is ahead of coaches, driver response has been excellent. That bodes well for the coach sector when cameras become standard, as they surely will eventually.

55 seats in the P20 gives ample leg room, further endearing the big Neoplan to long-distance touring work. For passengers in the front row, changes to the B-pillar arrangement are a positive. When all is combined, the latest Tourliner is certainly worth a look.