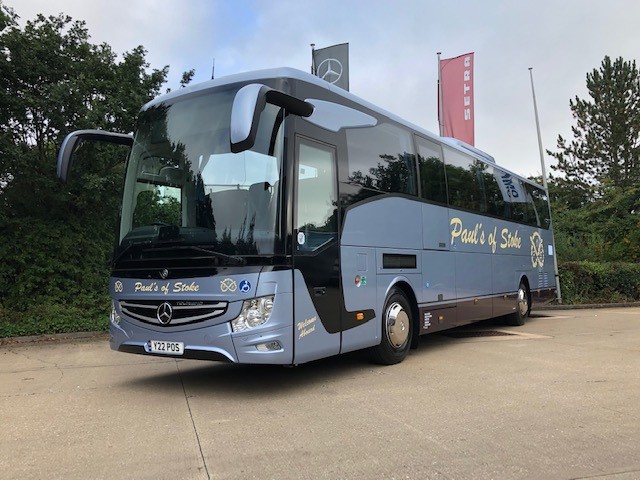 Paul’s of Stoke, based in the village of Harriseahead, is among early customers for the Mercedes-Benz Tourismo Access. The vehicle concerned is the eighth Euro VI Mercedes-Benz coach in the Paul’s fleet and it carries the business’s distinctive metallic blue livery complete with prominent Staffordshire Knot motifs.

The Access variant of the Tourismo was conceived specifically by dealership EvoBus (UK) to meet the growing requirement for a cost-effective, PSVAR compliant coach.

That for Paul’s will put its accessibility certificate to good use on school and rail replacement services, with the former having become increasingly important to the operator of late, says Director Paul Durber.

“We already had a few school contracts before the pandemic, but these became a lifeline over the past 18 months,” he explains.

Although full implementation of PSVAR in the coach industry has been delayed, Paul’s “wanted to show commitment to this revenue stream,” says Mr Durber. “The price tag for the Access is good, and given that we know the vehicle already, it was an easy decision to make.”