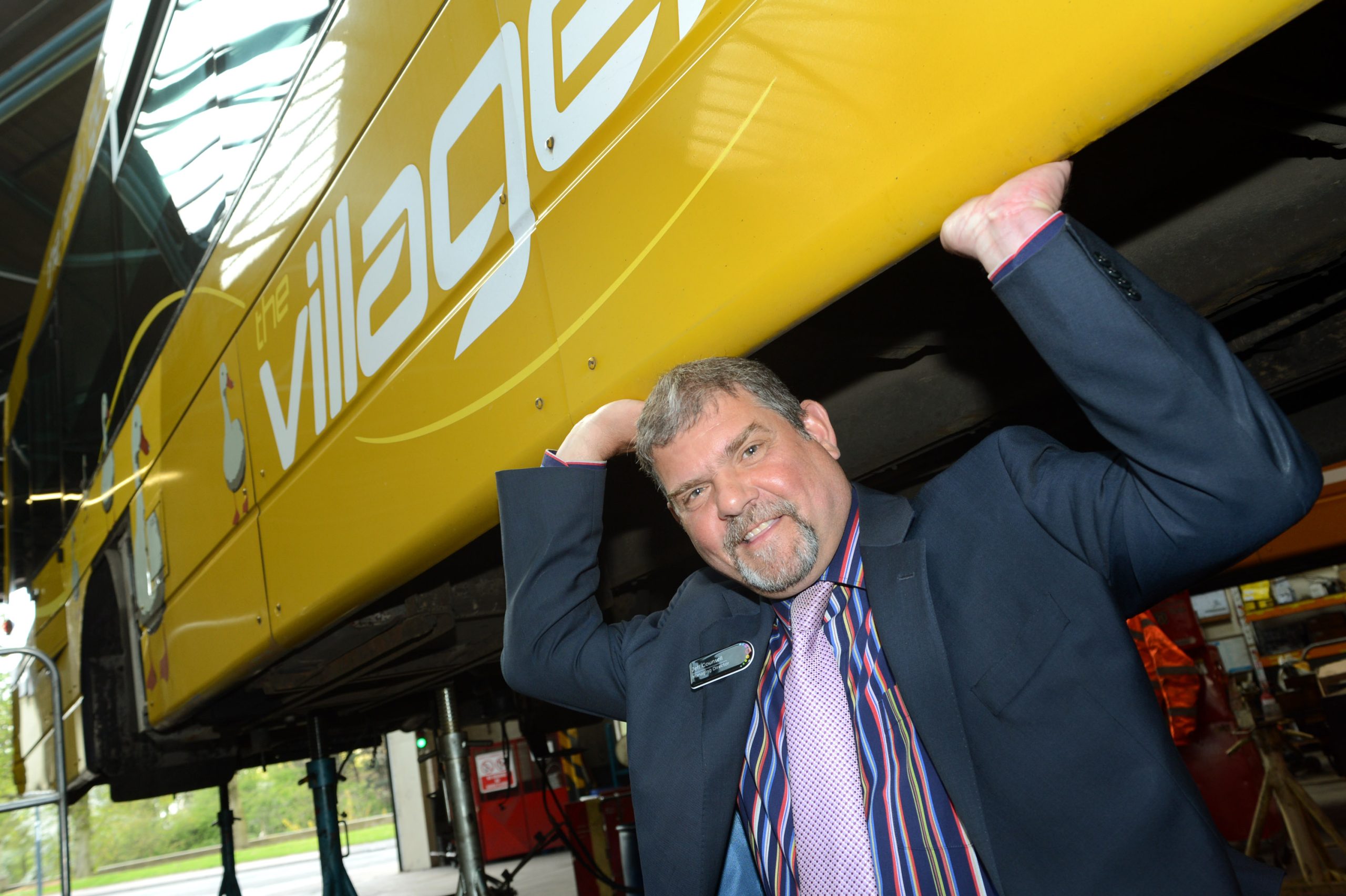 After almost 50 years in the bus industry, Jeff Counsell is set to retire in 2023. routeone looks back on a career which has always had people at its core

Jeff Counsell’s bug for fixing things had its roots with his father, an instructor on the National Coal Board’s apprenticeship programme. Always fascinated by what his father was doing, Jeff would help as a child – as much as his dad would let him – and, combined with a typical loathing for school among boys his age, he knew from 14 or 15 that he would seek a career that was practical and for the mechanically minded.

An engineering role in the army beckoned, but it was not to be: “I developed a taste for serving with the Royal Electrical and Mechanical Engineers, because I thought that would be a pretty good career and give the opportunity to travel,” Jeff says. “But my parents talked me out of that. Troubles in Ireland had started. So they convinced me to look closer to home for an apprenticeship.”

It was a catchy advertising slogan – one that is still memorable today – that convinced Jeff to begin his long career with the bus industry. “Lancashire United Transport (LUT) – the local bus operator, had three depots, and you always saw the buses. It used to advertise on the side of the buses: ‘Just the job – a job at LUT’.

“I applied to a number of places, including LUT, went for a first interview, and got a really nice feel for the training guy there. That’s how it started.”

The year was 1974, before Greater Manchester (GM) Buses, but just as the GM Passenger Transport Executive (PTE) was starting to form. LUT, similar to the size of Trentbarton as it is today with just over 300 buses, was captured by what became GM PTE and GM Buses. Jeff’s four-year apprenticeship benefited from the growth, turning into wider opportunities. “I loved every aspect of it,” Jeff recalls. “I thrived on it, because I was doing something I was interested in.”

“I didn’t have one day off,
including weekends. That was
a sacrifice not worth paying.
It was after that summer I
decided this wasn’t for me”

Those who did well in apprenticeships were fortunate that LUT became part of GM Buses – the operator went from an outfit of over 300 buses to some 2,500, with many locations and a strong apprentice training department and school at Highgrove. “As long as you kept passing your exams, they’d keep asking what you fancy doing next,” says Jeff, who went on to complete his apprenticeship, City and Guilds, Institute of Royal Transport Engineers, Institute of the Motor Industry, Chartered Institute of Logistics and Transport, and, after a chat with the head of training Ian Wilson, management studies.

“He sat me down and said you need to think about where you want to be with your career. I took each thing as it came. I was never ambitious for any particular post – just enjoyed what I was doing. Certainly, I never aspired to become the MD of a bus company in my mid-20s. But I knew I didn’t want to go home smelling of diesel every night. I established that.”

Jeff was a fitter on the shop floor at the time, then applied for a Vehicle Examiner job, which allowed him to travel. Foreman followed when he was 24, then Senior Foreman, various Engineering Manager roles, and Chief Engineer of GM Buses North by the early 90s. He was always prepared to move to take new opportunities – even if he had never heard of where he was going.

The 1990s had seen GM Buses split between GM Buses North and GM Buses South, with Stagecoach Holdings taking the latter, and a management-employee buyout taking the former with the aid of venture capitalists. Jeff recalls those difficult years.

“I soon came to realise the venture capitalists were not focused on people, and were focused on their return. I was Chief Engineer for what was then the north part of Greater Manchester. They were tough times, going through that buyout. We paid too much money for the business, so there were cost cutting exercises. What was originally a five-year plan became a two-year plan for the venture capitalists to exit and sell the business off. We went from a period of high excitement for the opportunity to take GM North and make it ours as a senior management team, to nine months in, because of pressure from the venture capitalists on the board, bringing forward plans to reduce costs over two or three years into an 18-month window. I have never been through as many industrial tribunals as I did in that 18-month period. It was awful. There were people I’d worked with on the shop floor that were being severely impacted by these decisions.

“That second summer I had three young children. During their six-week summer holidays, I didn’t have one day off, including weekends. That was a sacrifice not worth paying. It was after that summer I decided this wasn’t for me.”

Disenchanted, Jeff received a phone call from a recruitment company looking for an Engineering Director for a bus company in the north east, which was North East Bus, latterly Arriva North East. He took it. “That was brilliant,” he says. “That was back to an operator of 350-400 buses, and it had a good feel to it – people had been working there a long time. It took me back to what was a people business.”

Jeff became Deputy Engineering Director for an area covering Berwick-upon-Tweed down to Whitby. But the move was not to last forever. “I and the then Engineering Director, John Greaves, who has been retired for quite some time, were standing on each other’s toes, not knowing who should do what. I saw the position for Director of Engineering for Trent in 1999 in the trade press, and jumped at it. I had just turned 40 and had long admired Trent before I came here, and the industry had long admired Trent’s pioneering route branding and approach to service delivery and commerciality. The rest is history.”

Well glade Group had acquired ex-family business Kinchbus just before then, and Jeff’s skill in increasing its commercial work demonstrated how he could turn his hand to more things than just engineering. In 2003 the post of Director of Service Delivery was created, combining engineering and operations. He was the obvious choice for Managing Director when incumbent Brian King stepped down to become Chairman in 2009.

Stresses of the last year have seen Jeff decide that the time is right to retire. Tom Morgan, Trentbarton Group Commercial Director, will take over as Managing Director.

It’s obvious that Jeff’s career has always had people at its core, as evidenced by how quickly he took to general management in addition to engineering.

“I know that’s a cliché, but it’s true,” he says. “No one individual is more important than any other, and we are a bottom-up organisation, so we care genuinely about what our staff think. It doesn’t always come over that way – you will always have people who are disgruntled, or want to do things another way. But we genuinely listen, not only to our customers, but to our staff.” One person who taught Jeff a lot about humility, and treating people well, was a Foreman during his apprenticeship years – David Brown. And his difficult experience with the management buyout at GM North had a lasting impression on how Jeff feels bus services should be run. “Involve everyone with making changes,” he says. “And in running the business. It made me appreciate that no-one is more vital than anyone else in this industry. We all just do different duties.

“It’s easy to say ‘taking people with you’ – but you have to sit with those people. Have a cup of tea in the canteen with them. Get underneath the bus and have a chat with them. Whatever it takes to get their confidence, you’ve got to be there with them.”

Recently, an industry colleague was staying overnight in Ripley, so we arranged to meet for a meal in Codnor in the evening. I gave my friend details of the bus he should take to reach the pub we were due to meet at. He doesn’t know the area, so I sent him a text saying to catch the Rainbow One from Ripley Market Place, and ask for Codnor Market Place.

He says: “I got the 1839hrs rainbow one from Heanor. It was a new driver, who didn’t recognise me, but he said, ‘Ey Up, mate. Are you okay? Are you off out?’ He had a nice smile and made great eye contact. Everyone who got on or off, he was the same. It was brilliant. As I alighted I thanked him and told him he had made me feel really welcome. When I arrived at the pub, where I was meeting Jeff, I was already feeling good about my own bus experience.”

My mood improved further when my colleague described his own journey, complimenting the timekeeping, cleanliness and presentation of the bus and the effectiveness of the real-time travel information, voice announcements and displays.

He was also full of praise for his driver; being unfamiliar with the area, he had Googled the pub where we were due to meet and noted it was situated on Alfreton Road, so, when he boarded, that’s what he asked for, paying on his mobile. However, when he came to get off, just a few stops later, the driver stopped him and said, “this isn’t your stop”.

When my colleague pointed to the pub as being his destination, the driver insisted that she refund him the fare in full as she had charged him all the way into Nottingham which, indeed, was where the first stop named Alfreton Road was. He was promptly issued a free ride voucher valid for any journey during the following six months.

He thought it was brilliant and not something that he’d seen happen anywhere else. It made me feel proud of our fantastic team.

Bulk diesel average price down by 7.6% in November

Transport for Wales and Women in Transport collaborate