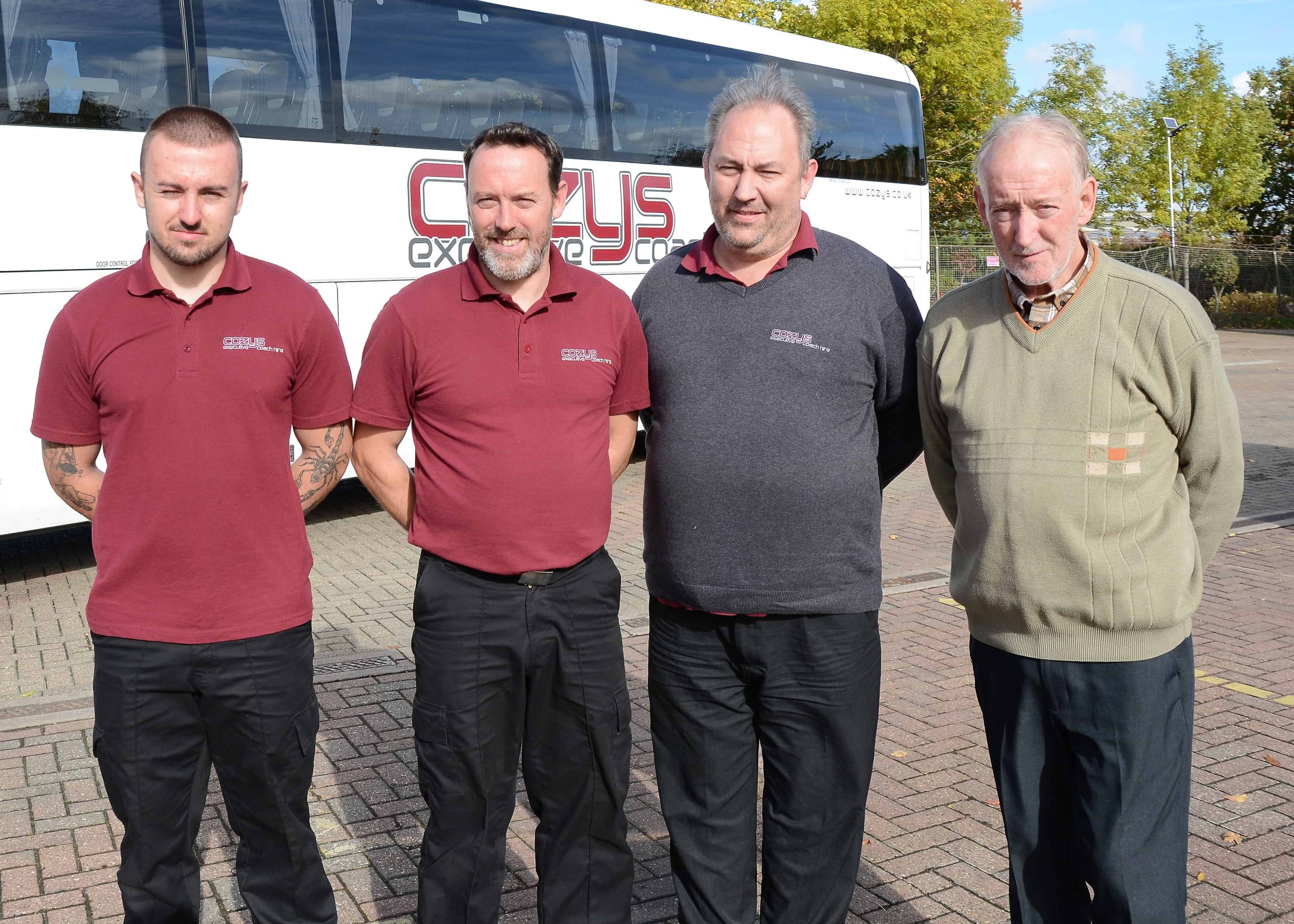 Established by the father, managed by the sons, and with a grandson as an apprentice, the story of Cozy Travel is a story of a traditional family-run coach operator, with a nod to the music industry

There’s a full-length mirror on the wall of the main drivers’ area of the offices of Cozy Travel.

Norman Powell, Founder and Director of the Bedfordshire operator, explains that the company has prospered due in no small part to the attention to quality and detail.

“You’ll note many of our staff wearing branded jumpers,” he says. “The mirror also reminds drivers to check their appearance. These things matter.”

I’m sat with Norman and his two sons, Greg and Brad, all Directors of the business, to find out more about an operator that’s perhaps best known in the industry for being one of only two in the UK to have an Irizar i4H hybrid coach. We’ll come back to that particular vehicle in a moment.

The present site, located in a modern industrial estate on the edge of the market town of Sandy, close to the A1, has only been home to Cozy Travel since August 2021. Moving to the new site in the middle of the COVID-19 pandemic might seem to many as being rather risky. But when you talk to the Powell family you realise that a business focus on home-to-school (H2S) work meant that the company found itself in a strong commercial situation.

“We were fortunate that when the pandemic hit we were in a good place,” says Norman. “I like to think I’ve taught my sons a thing or two about coach operations.”

Greg interrupts. “One of the most important lessons dad taught us was the importance of knowing your true costs. Because so much of what we do is built around H2S and the associated contracts, it’s been vital that we steered our ship on a sensible course. As we emerge from the worst of the pandemic I feel both fortunate and relieved that we can now look forward again. The move to the new site was a practical decision, both commercially and operationally while giving us more opportunity to grow in other areas.”

“As work came in we started to expand the fleet,” says Norman. “We acquired many second-hand midicoaches. That was our niche really.”

Greg explains that the company was turning work away.

“Our reputation was bringing in work,” he says. “But we didn’t have anything in the growing fleet to cater for larger groups. We had no plan to operate full-size coaches, but we realised we probably needed one. In the early 1990s we acquired a 53-seat DAF Plaxton Paramount, the first full-size coach. But once we had that larger coach we found the work was there, in part because other local operators were closing. Those closures were due in part because many older, family-run operators had no succession, no-one to take over.”

The focus on H2S has been there from the start of minibus operation.

“Working with schools has meant we’ve always had wheelchair accessible vehicles of one sort or another,” says Greg. “For us, PSVAR wasn’t a surprise.”

Greg is thoughtful when I ask him how the industry has changed over recent years.

“I remember a time, not so long ago, when you didn’t bid for tenders because other operators had that work,” he says. “Operators would help each other out. Those days are gone. Some still do, but most don’t.”

I ask about driver shortages. “We’re six down at the moment, so we’re having to turn work away. There’s actually an abundance of work, possibly because of a lack of drivers elsewhere. Only a year ago there was quite an age range across our drivers. Now we’re really struggling to attract younger drivers. It’s a generation thing. Younger people want everything now! I do wonder if maybe the removal of the young driver 50km restriction would help with recruiting younger drivers?”

In 2001, Cozy Travel acquired the business of Hitchin-based Abbey Travel, bringing the fleet size to 22, the largest it has been.

In 2012, Meridian Line Travel of Royston was acquired, together with the premises, a move that came as Cozy Travel joined 43 other operators contracted to LOCOG (London Organising Committee of the Olympic and Paralympic Games).

In the aftermath of the Olympics, Cozy began to standardise the vehicle fleet, at least in terms of running gear.

“The Abbey and Meridian businesses had mixed fleets,” explains Brad. “Today the running gear on our full-size vehicles is predominantly Volvo and DAF. It’s horses for courses, but we like Volvo and DAF. We still have some MAN though.”

Today the fleet sits at 21. In addition to a Van Hool Altano and a Noge Catalan, and a recently acquired 21-plate Irizar i6, Cozy also operates the aforementioned Irizar i4H hybrid, the first of only three ever produced for the UK.

Norman explains that in 2020 the company had been talking to its local authority, Central Bedfordshire Council.

“Tenders were focusing on the green agenda, so we were looking around for a suitable vehicle,” he says. “We spotted that Irizar had developed the i4H hybrid coach. We looked at it, we liked it, we asked if it was available. It was, so we bought it. I believe there are only three in the country, the other two are with an operator in Kent. It’s a lovely coach. We’re getting fuel savings of up to 20%. I understand that Irizar still has the tech to produce more, but other developments have moved things on.”

Today, joining Norman, Greg and Brad as for Directors is Gary Titmuss, Transport Manager. Noman is taking more of a back seat, although still doing a school run every day and other bits and pieces. Brad’s son, Blake, is also part of the team, currently in a second year of his engineering apprenticeship.

As the team look to the future, Norman finds himself looking back over his 45 or so years in the industry.

“I wish we could go back in time,” he says. “Things have changed drastically. Back then, vehicles could be put back on the road quickly. Not now. But Greg and Brad are passionate about the business. That gives me hope!”

“You can’t sit still, you have to move with the times. I’ve been a member of the Institute of Transport Administration since 2007. I’m just about to be installed as the National Chairman. That makes me feel very proud to have achieved that. But that aside, we’re drowning in compliance and regulation. It’s all likely to get worse! I want to find younger drivers, but it’s hard. The younger generation want everything, and they want it now. But for all of us, this is a lifestyle. I can’t imagine doing anything else!”

Bulk diesel average price down by 7.6% in November