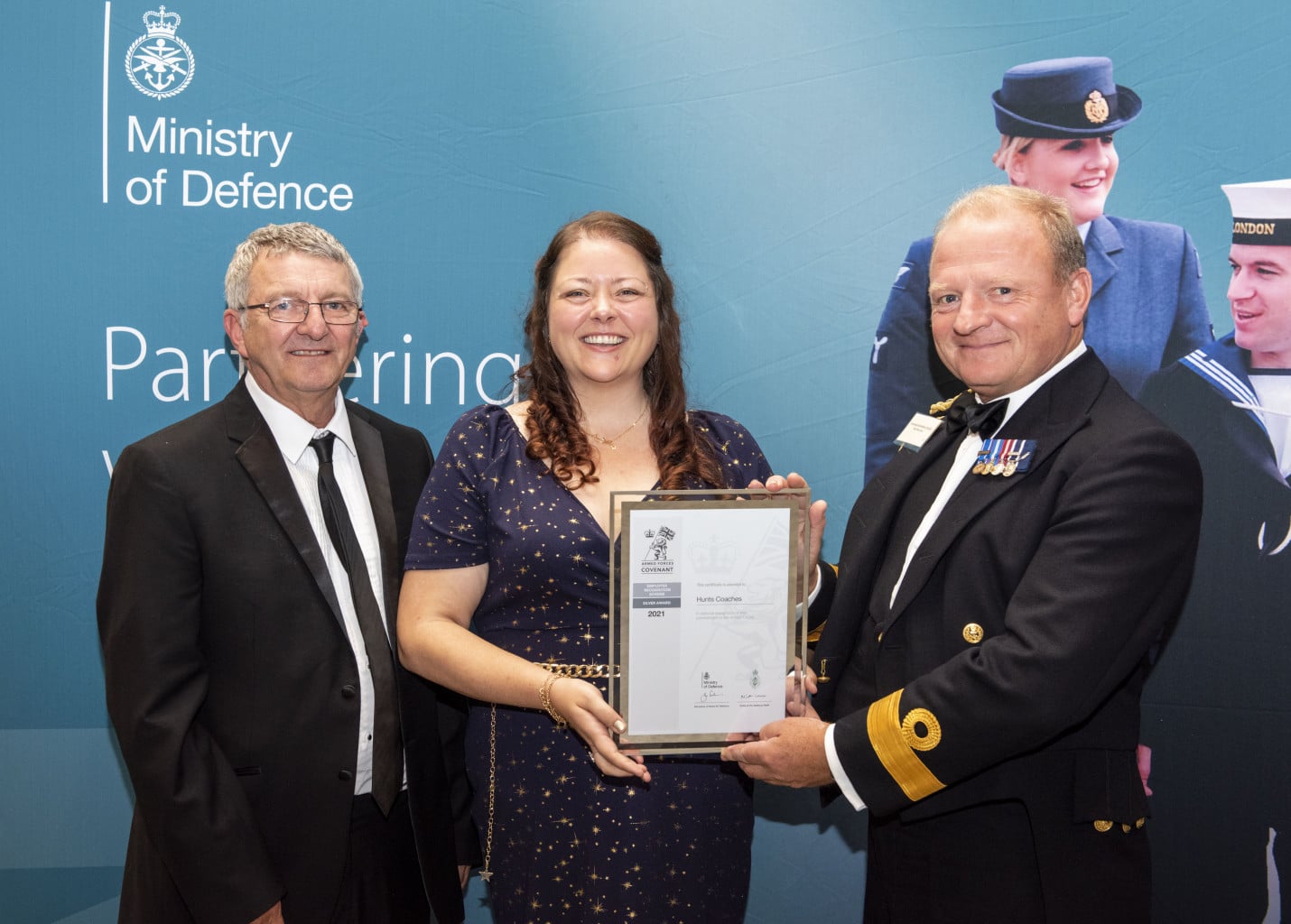 The Armed Forces Covenant is a commitment to treating those who have served or serve with respect and dignity. We examine the benefits

The Armed Forces Covenant is a pledge by businesses to acknowledge and understand that those who serve or who have served in the armed forces community, along with their families, should be treated with fairness and respect.

It involves communication, connection, and providing equality and opportunities while recognising the work those in the armed forces have achieved for the nation. Coach and bus operators can get involved in their own way – National Express was one of the first companies to become a signatory in 2013, renewing the commitment in 2018 for a further five years.

National Express has employed former forces personnel and reservists in a variety of roles, including as drivers, engineers and customer service advisors, from across the forces – including the Royal Marines, Royal Signals, Royal Engineers, Royal Air Force, Royal Navy and Gurkhas, ranking from Private to Major.

As part of its pledge it offers guaranteed interviews to service leavers for all National Express roles across coach and bus, includes spouses and families of service leavers in its guaranteed interview scheme, and provides 10 days extra leave for staff in the reserve forces. There is also a range of discounted and free coach and bus travel across all its operations.

For some signatories, such as Bennetts Coaches, a close relationship with the armed forces also provides a steady stream of contract work.

Hunts Coaches reveals how the operators benefit as well as the members of the armed forces community they assist.

‘The spirit of Lincolnshire’

Hunts is a small family business based in Lincolnshire, a county entwined enough with the Royal Air Force that it has long been affectionately known as the ‘Bomber County’. Hunts was recognised for its support of the armed forces community in November by becoming one of a record 32 organisations in the East Midlands to receive the Ministry of Defence’s (MoD’s) Employer Recognition Scheme Silver Award 2021.

Being a signatory of the Armed Forces Covenant builds on a long history of co-operation with the armed forces community. In 2020 Hunts celebrated its 90th anniversary with much reflection on that history, which began with transporting prisoners during the Second World War, and providing some with work placements under then founder Frederick Hunt.

The operator’s work with the armed forces community moved onto transporting American service personnel and workforces to the Royal Air Force Station at East Kirkby, and by the early 1950s it had several contracts with local aerodromes to transport key workers. These days, Hunts provides a variety of day trips that link the history and contributions made by those armed forces personnel, while promoting community activities.

So Hunts has always encouraged and supported the armed forces community. It has had veterans work with its vehicles, such as HGV mechanics joining from military roles, and named one of its coaches after Captain Sir Thomas Moore, as a symbol of the great spirit present in many of those who have served. Signing up to the Armed Forces Covenant is a public statement of that commitment, and is about communicating the business’s core values effectively.

“It was through other networks that we found out about the Covenant. And it just aligned perfectly with what we do as a family business and the values that we have,” says Hunts’ Business Development and Marketing Manager Lindsay Linder. “It’s really important to us insofar as what we actually do as a provider: Making sure people are connected, that everybody gets the same opportunities, that there is equality for all. We recognise the importance of the things that the people in the armed forces have done for us as a nation and we want to be able to give back if we can. We would certainly encourage anybody who hasn’t to get involved with the Covenant.”

Demonstration of those values is through policies, one example being recruitment. Hunts uses online portals available to reach out to service personnel to be as inclusive as possible about what opportunities are available.

The operator is disability committed to show the value it places on people from all walks of life. And something as simple as communicating the extra days’ leave granted to reservists can make all the difference in encouraging someone to join an organisation.

Lindsay explains how businesses have a lot to gain from becoming a signatory. That starts by becoming a member of a wider community of businesses which are like minded. It also provides a contact point for recruitment. “When veterans leave the armed forces, we are able to advertise with family,” Lindsay adds. “There’s a particular website we can put postings on for job opportunities and if we hadn’t been part of this process we perhaps wouldn’t have known about it.

“It lets us find ways we can connect with military personnel and their families and reservists, and how we can make sure they know about us. It helps when they know that we understand their values and beliefs and that they align. That makes them more likely to join us.

“We also have more opportunities to engage with the different services and promote our placements and job opportunities. They understand that if you are an Armed Forces Covenant signatory, you are there to support them in whatever they are trying to do. That is cross beneficial for both the business and whoever is considering joining your business, or thinking about using the services that you provide.”

Lindsay points to certain skills that can prove particularly valuable from those in the armed forces. They include leadership and initiative, and skills from past work as mechanics and drivers. “They deal with such a varied range of scenarios that they are very adaptive,” Lindsay adds. “They are able to work with their own initiative to contribute and deliver, and that’s not to be underestimated.”

Working with the challenges that those members of the armed forces community may face is a personal issue. Hunts provides the best support that it can in order to be a compassionate employer that listens to its staff members and customers. “It’s a tricky thing to be able to say how somebody else’s experiences from a previous role might affect how they operate within a new career,” Lindsay points out. “We’re a relatively small team and we all talk regularly. If anybody has a problem, they know who to speak to about it. We do whatever we can to support our workforce and however we can. And that goes for anybody in the workforce – it is not something exclusive to those who are reservists or veterans.”

For those deserving of further recognition for their commitment, MoD’s Employer Recognition Scheme Awards boost the value of being a signatory. Hunts is able to speak about its winning of the Silver Award in November and the benefits that that brings.

In order to win, the pledges as outlined in the Covenant must be evidenced. That includes extra leave for reservists, supportive human resources policies in place for veterans, reservists, the cadet force and adult volunteers (as well as spouses and partners of those serving in the armed forces), and companies must also demonstrate that service personnel and their families are not unfairly disadvantaged as part of the recruitment and selection process.

“There are a lot of different criteria that organisations have to go through when submitting an application,” Lindsay points out. “As an example, they need to state their intent, and go through the stages – you can’t win silver if you haven’t got bronze. You’ve got to demonstrate that workforces are aware of the positive policies towards defence personnel’s issues.”

Operators must also be of good repute in order to qualify for the award – there is no room for operators with a track record of negative media activity – making the MoD awards something of a badge of excellence for businesses which qualify.

“Director Michael Hunt and I attended the awards ceremony at the International Bomber Command Centre, and it was amazing to be there to receive such an accolade as we did,” Lindsay adds. “A proud moment to think we’ve achieved that as a small family business and to do what we do and to be recognised as such was just wonderful.”

Engaging with the Covenant is a simple process. All necessary details can be found on the Armed Forces Covenant website, where a helpful team is ready to answer any questions and explain what a business is able to commit to. “It’s all about making sure this isn’t just a piece of paper,” Lindsay says. “And to make sure it’s communicated throughout the company.

“Our Directors are really committed to providing what it says in the Covenant and it’s an easy process, we’d encourage anybody to get involved and make that pledge and many people will probably find it involves things that they are already doing – but they have not realised the benefit it could show to the community out there if they made it more clear.”

Hunts has publicly stated its involvement in encouraging other businesses to sign up to the Armed Forces Covenant. Lindsay reveals she is part of numerous business networks and spreads the word whenever the opportunity arises.

“It raises awareness and it’s not a difficult thing to bring into a conversation,” she says. “A few weeks back I was at a social club giving a talk about coach tour holidays, and as part of the discussions they wanted some locations with more of a military theme. Within those kinds of conversations it comes out. It’s a lovely thing to speak to people about and to get them involved in.”

And there are perks for signatories to the Covenant in the form of introductions to different services. Most recently Hunts was invited to an online introduction to the reservists’ service and its role within the armed forces. “That further raises the awareness of how people can get involved,” adds Lindsay. “As business leaders, that’s great to understand, and if we have released somebody to do those duties, what contribution it makes. It’s lovely to have those opportunities to find out more.”