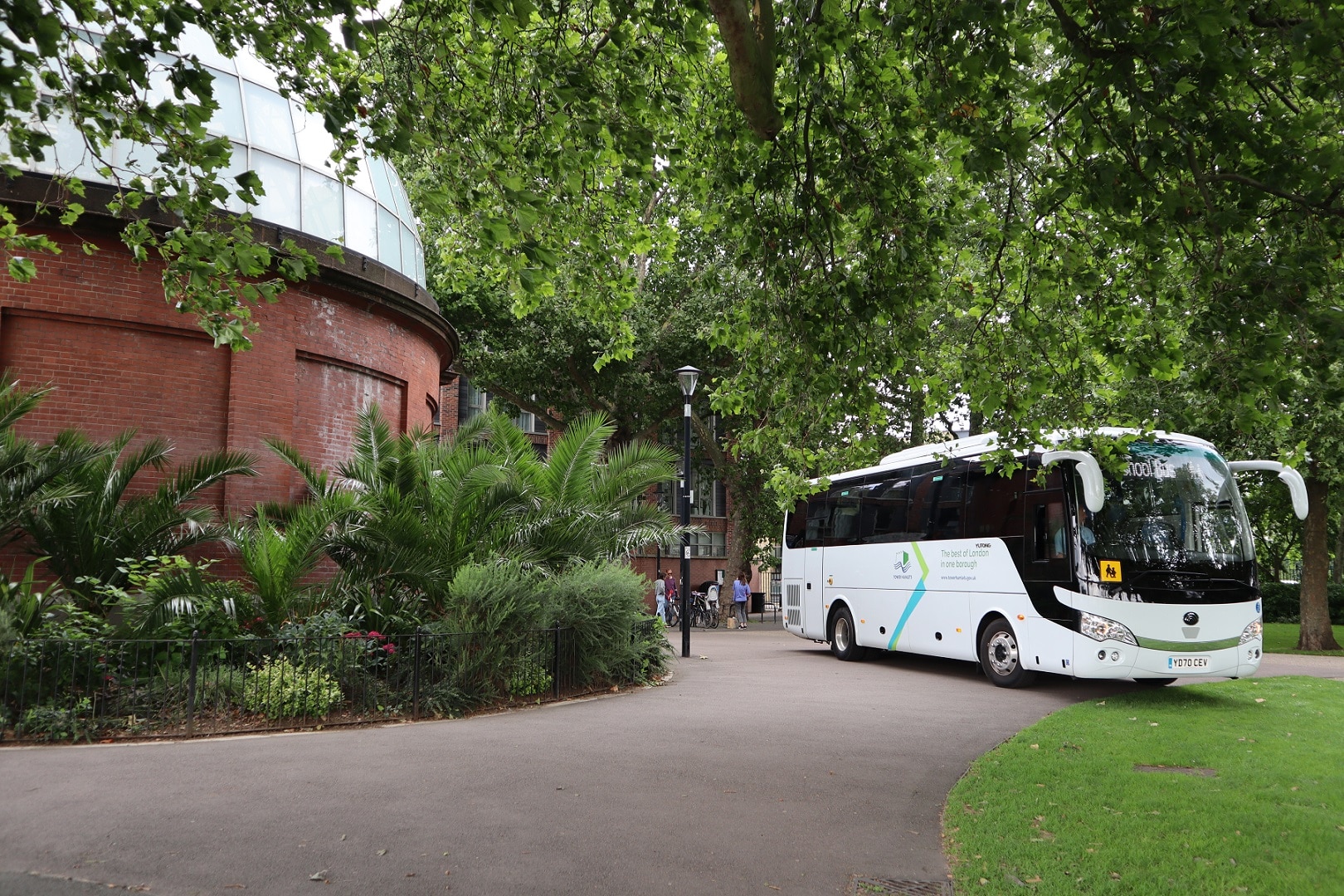 PSVAR is the biggest issue facing the coach industry as operators strive to update and adapt fleets to comply. To do that, many vehicles are configured to carry a single wheelchair user. A narrower band of purchases have accessibility as a primary function and can convey multiple such passengers. That segment is Pelican Bus and Coach’s target for the Yutong TC9 Mobility.

The TC9 Mobility uses as a base the same TC9 midicoach of which almost 400 are in service in the UK. It is PSVAR compliant, with some work in that regard done in China and the remainder after shipping.

All seats barring the rear bench of five and the pair immediately ahead on the nearside are tracked. Two additional tracking rails on each side are installed to accommodate securement apparatus. A maximum of eight wheelchair users can thus be carried when all demountable seats are removed.

Pelican adds that when the courier seat and the fixed positions in the saloon are combined, there is sufficient capacity to convey a companion for each wheelchair user if desired.

When all seats are present, the TC9 Mobility is indistinguishable from any other PSVAR-compliant TC9 that lacks a toilet. At those times, it can thus be used on the whole gamut of home-to-school, rail replacement, private hire and tour work, creating what is a highly versatile midicoach. That is one of the things that attracted the first customer for the TC9 Mobility concept.

Development of the TC9 Mobility by Pelican followed discussions with Dawsongroup Bus and Coach. Customer requests for the number of wheelchair users that could be carried on PSVAR-compliant TC9s had slowly been rising.

Meanwhile, the London Borough of Tower Hamlets was about to competitively tender for the replacement of some older, non-Low Emission Zone (LEZ) compliant mid-sized vehicles. Part of its specification was a capacity of eight wheelchair users for fleet commonality purposes.

“We looked at the base coach, measured it, and calculated that it could accommodate the required number of spaces,” says Pelican Sales Manager Bob Elliott.

He observes that increasing the amount of tracking in a vehicle is not merely a case of fitting it; sufficient structure must be present beneath the floor to secure the rails in accordance with approval requirements.

While Tower Hamlets is the first customer for the TC9 Mobility, it has other non-accessible TC9s within its fleet. All have been sourced from Dawsongroup Bus and Coach on three-year lease agreements.

Due to COVID-19 and the temporary cessation of external visits and sports trips, the Mobility examples have so far been utilised solely on home-to-school duties. Under more normal circumstances, they will additionally find use between the morning and afternoon peak, and to convey children to and from an outdoor activity centre near Stansted Airport that is owned by Tower Hamlets.

The local authority (LA) did not specifically require that bidders must offer coaches, but its tender criteria called for 35 seats with belts and in some cases, the high wheelchair user capacity. That left a narrow field of potential products, particularly when the constraints of operating circumstances were considered.

“We cannot have children aboard for more than 55 minutes when carrying out home-to-school duties,” says Interim Fleet Operations Manager Philip Dodds. “Modelling has shown that realistically, we are unable to board many more than 30 passengers while satisfying that.”

A further consideration is the parts of East London served by the TC9 fleet. While Tower Hamlets has operated a handful of full-size coaches in the past, they are not practical in many locations.

Before the Yutongs arrived, there was a degree of unease among some drivers who were more used to smaller, front-engined vehicles. That was quickly assuaged, adds Philip.

“Previously, some staff did not want to handle what they considered a coach,” he says. “But the TC9s are surprisingly manoeuvrable. Drivers also like the comfort aspect, including the air-conditioning. The reverse camera and parking sensors are also appreciated.” One driver adds that the ZF EcoLife automatic gearbox is a further boon for driveability in urban areas.

Yutong TC9 Mobility fleet set to come into its own

Tower Hamlets has equipped its TC9s with the same telematics system that is fitted to other members of its wider fleet, including refuse collection vehicles. It works via the vehicle’s CAN bus and feeds back to the operator a wide variety of data, including granular driver performance information down to whether they have their seatbelt on.

A requirement to carry children in social bubbles during the pandemic has meant that Tower Hamlets’ use of the TC9 Mobility coaches thus far has been less reliant on their accessible nature than it will be in the future. The LA has hired additional vehicles to accommodate the change in how pupils are distributed, but Philip says that the ability to convey disabled travellers will become more prominent in the future.

Pelican has worked with Yutong’s factory to achieve PSVAR compliance on its coach range. A TC9 specified thus – regardless of whether it is a Mobility model or not – receives the additional door and some of the tracking at the factory in China. Pelican has the work completed in the UK, including fitment of a Hidral Gobel lift and Mobitec destination display equipment. Bob reports that while some customers still do not require PSVAR on new coaches, there has been a shift towards specifying it among many.

A zero-emission future for Tower Hamlets?

While the Euro VI TC9 fleet has displaced older, non-LEZ compliant vehicles, 40% of Tower Hamlets remains in breach of air quality standards at some part of the day. The impetus to rectify that is clear, which is what elected Mayor John Biggs has pledged to do.

Because of those air quality issues, the vehicles that eventually succeed the TC9s in Tower Hamlets’ fleet will likely be zero-emission.

Philip says that a refuse collection lorry that is on order for later this year is set to be the last diesel-powered vehicle delivered to the LA. Discussions have already started on how battery-electric fleet members can be charged.

“We will look for the same seating capacity on later vehicles as the TC9s, but with zero emissions,” he adds. Constraints on the time that children may spend aboard vehicles on home-to-school services, and operating conditions, mean that there is no call for anything above the mid-size range.

Pelican already has a zero-emission coach in the battery-electric Yutong TCe12. There is as yet nothing to be said on whether the manufacturer will extend that technology to an equivalent of the TC9, says Bob. However, he notes that the driveline is already in widespread global use in various vehicles in the coach and bus sectors, where it has proved highly successful.

From Pelican’s point of view, the TC9 Mobility is now an off-the-shelf vehicle that it can supply from stock. Dawsongroup can additionally provide the model to customers via its usual funding mechanisms, says Service Delivery Manager London Anton Chiu-Foon.

Pelican and Dawsongroup enjoy a good relationship that has been helped by work on the TC9 Mobility, adds Bob. Dawsongroup has found that customers in both coach and bus continue to heavily favour Euro VI diesel for new purchases, but Anton notes that it could supply zero-emission vehicles, including the TCe12, if required.

The supplier is currently “testing the water” away from diesel, he continues; the biggest challenge for a leasing agreement is plotting a residual value for such vehicles. There is more certainty in that regard for a diesel, and particularly where PSVAR is in play.

“Demand for used PSVAR compliant coaches is very strong. When they return to us, they are placed with new operators very quickly, and often in less than a week.”

The Yutong TC9 coaches with Tower Hamlets – whether they are Mobility examples or not – fulfil a different requirement to most of the other almost 400 examples that are on UK roads. They cover low mileages and will be attractive to later owners.

For Pelican, the TC9 Mobility extends the scope of what has become the distant market leader in its class. It is a versatile, well-specified model that does everything that a conventional midicoach can, but combines it with a high level of accessibility, availability from stock and aftersales support from the dealership that has already been appreciated by many of its multitude of other buyers.