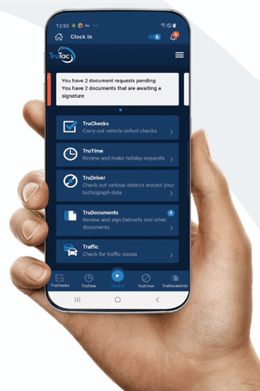 TruTac has launched a new driver app. In addition to the core vehicle walk round checks recording function transferred from the former TruChecks app, it is more closely integrated with the supplier’s other products. That will allow drivers to access those – including TruAnalysis, TruDocuments Premium and TruTime – directly, which the supplier says will come as a benefit for operators also.

In addition, the app can send data from walk round checks to the TruFleet system for ease of maintenance planning and to minimise vehicle downtime.

TruTac says that when the TruChecks app was launched 10 years ago, it was the first such means for each driver to conduct paperless walk round vehicle checks. That purpose “remains as relevant as ever” with the new system, the supplier adds. The new app is available on both Android and Apple platforms.

Speaking about the new product, TruTac Managing Director Jemma James says that it “is fully configurable and scalable according to the modules that the company has live.” She adds: “A decade ago, it was about doing walk round checks. That has grown hugely to enable access to the document library, uploading documents, requesting holidays and a host of other integrated features.

“Because of the changes in technology on Apple and Android platforms, rather than tweak the app, we wanted to make a completely new one. It now has additional security features, greater configuration and more functionality.”

The integration between products allows drivers to see tachograph information such as any infringements, driving time and whether a break is due, although Ms James adds that some of the supplier’s customers are out of scope of EU drivers’ hours, including bus operators.

However, those organisations “still need to do walk round checks, which is why we have kept that as a core function,” she continues.