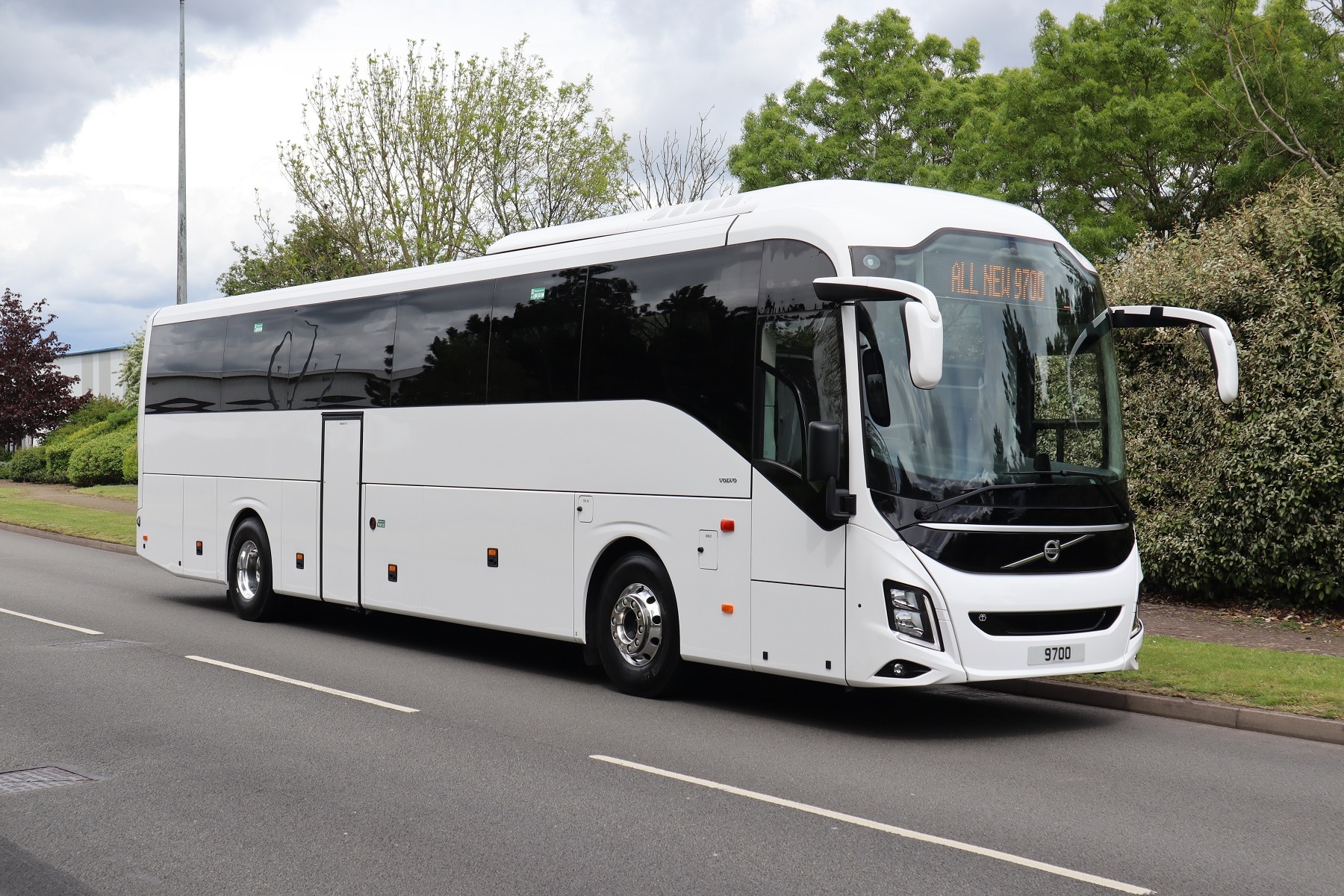 Undoubtedly the most comprehensive coach offering in the UK is from Volvo, with the manufacturer recently growing its range here further with the addition of the latest generation 9700 on two axles at 13.1m. Like the flagship 9900, it is a complete Volvo product that utilises proven B11R running units.

The new 9700 was first introduced to UK and Irish customers when the 9900 was formally launched in 2018. Further research into the appetite for the 9700 was carried out at Coach & Bus UK in 2019, when a left-hand drive example was shown.

“We got a very good reception from operators at both of those events,” says Sales Manager for Volvo Bus UK and Ireland Dave Porter. The Coventry dealership now has a batch of 53-seat 9700s in stock and it is majoring on the model’s versatile nature. The 9700 is also available built to order, although Volvo is keen to maintain a distinction between it and the 9900. As an example of that, the 9900 comes solely on three axles and the 9700 only on two.

Both models can be supplied with a repair and maintenance contract in place, and the complete coach is supported by the Volvo dealer network. Every item on the chassis and within the body has a Volvo part number, meaning that it can be ordered via that channel.

Volvo 9700 is a versatile challenger in the two-axle market

routeone recently drove a PSVAR-compliant 9700. Under the bonnet is the 10.8-litre D11K engine. It develops 430bhp and 2,050Nm of torque. A 460bhp and 2,200Nm option is available when built to order. Power is harnessed by the I-Shift automated manual gearbox.

B11R modules for the 9700 are delivered to Volvo’s factory in Poland as kits. The whole coach is then assembled in Wroclaw. Volvo Dynamic Steering (VDS) is standard.

While the manufacturer wants to maintain a demarcation between the 9700 and the 9900, the two models share some obvious design cues, including the headlights with a V-shaped beam pattern.

PSVAR is a core consideration. Volvo Bus has 11 9700s in stock. Six are fully compliant while the others are pre-prepared. In the latter case, all that is outstanding is the lift and the destination display equipment. Those can be fitted easily at a later stage.

Scope for accessibility is part of a bespoke specification for UK 9700s. Stock coaches come with a mid-range but nicely equipped seat, although options both up and down are available in 9700s that are built to order.

Manual parallel-lift luggage locker doors are also part of the standard specification, although they can be powered on custom-built 9700s. The underfloor area gives 8.65m3 of storage. The radiator is on the nearside, while the 600-litre fuel tank is over the front axle and the AdBlue filler ahead of it. Plated GVW is 19,000kg.

Well-appointed cabin comes as part of the package

The handrail to the left of the door is well designed for shorter or less mobile people. It follows the natural progression up the four steps to the platform, which is followed by one more to the sunken gangway. To the nearside of the compact courier seat is a storage box that contains a safe.

While the passenger seat model fitted to stock 9700s is from the middle of Volvo’s range, it is nevertheless well suited to the application in hand.

Part leather trim is combined with a hard wearing moquette and three-point belts are fitted. Amenities are a drop-down table, a footrest, a USB charging point and a magazine net.

The view from the saloon is generally good, and those passengers in the front row benefit from how the window line lowers there. But the windscreen destination display unit impedes the view ahead, as it does on most coaches that have one.

A servery can be added to the top of the centre sunken toilet, which is demountable. Volvo supplies a ‘spare’ seat pair with the coach. That allows capacity to be increased to 55 when the toilet is broken down.

Entertainment is via a Bosch infotainment unit. No DVD player is fitted; instead, a USB input is used and the set-up feeds to a pair of fixed 19in monitors. Perimeter radiators are provided and the coach has a comprehensive climate control system.

Accessibility considered in UK specification for 9700

Accessibility is via a D’Hollandia lift mounted at the front of the luggage bay. It has a safe working limit of 350kg and sits beneath a shelf, allowing luggage to be stacked above it. The pump and fluid reservoir are mounted on the steel framework within the underfloor area, which may leave them vulnerable to being knocked by cases that are being loaded or unloaded.

The lift emerges from a small ‘letterbox’ section of the relevant luggage bay door. Control is via a removable wanderlead, with the hand-held unit having two small magnets on the back.

They allow it to be stuck to the side of coach, mitigating the risk of it being damaged when in operation.

In the test 9700, two seat pairs are tracked and mounted on NMI quick-release legs. That allows the carriage of one wheelchair user although Volvo can install additional tracking on the nearside to permit more wheelchair passengers to be conveyed. Coaches that are pre-prepared for PSVAR receive their tracking during build.

The cab is the same as that in the 9900, albeit to a different trim level. As would be expected, an Isringhausen seat is provided. The windscreen blind is a powered one-piece affair. The signalling window is also powered and is heated. The 9700 comes with a péage opening in the door.

Storage in the cab is a little wanting, although each luggage rack has a separate lockable area at the front for the driver or courier’s belongings. The presence of the destination display unit means that the cabin rear-view mirror is above the driver.

The handbrake is slightly awkward to apply, as it requires the driver to pull the lever downwards. That aside, the seat position is good and the steering wheel adjusts well via a third pedal. Satellite navigation is an optional fitting, but a reversing camera is standard.

Coach is composed on the road under all conditions

B11R chassis units are a known quantity and their competence is well established. The 9700 continues in that vein. It proved to be well at home on both the tramline-ridden M1 and mixed-speed single carriageways around Rugby.

430bhp is ample for a two-axle coach. The I-Shift gearbox remains as slick as it has ever been, and the 9700 rapidly accelerates regardless of terrain.

The stalk-mounted auxiliary brake is equally impressive, and it slows the 9700 quickly and smoothly when called upon.

Performance is influenced by gearing that is a little shorter than that used in some other coaches. At 62mph the tachometer shows slightly under 1,400rpm in 12th gear – potentially 300rpm more than in some competitors. However, a benefit of that is how the 9700 can run in the top ratio in some scenarios where those other models cannot.

VDS is not standard across the board on B11R-based coaches but it is part of the package on the 9700. Initially the steering feel is completely different from models without it, particularly when manoeuvring at low speeds. Otherwise, it is easy to adapt to. The lack of shocks transmitted via the column is welcome.

Visibility from the cab is good, with twin gullwing mirrors complemented by a lower-level offside pane. Perhaps the biggest plus for the driver is how Volvo has mitigated noise here. Extensive insulation is fitted, and aerodynamics work has reduced wind intrusion from the mirrors. The overriding external sound at motorway speeds is from the tyres.

Optional on the 9700, although not fitted to the 11 stock coaches, is dynamic chassis lowering. That reduces the ride height by 20mm once 50mph is passed and it is a further part of Volvo’s work on aerodynamics and fuel efficiency.

Volvo Bus has high hopes pinned on the new 9700

In bringing the latest generation 9700 to the UK and Irish markets, Volvo is faced with repositioning the 9700 brand somewhat. In its previous incarnation, the model was placed as a top-end tourer. That slot has been taken by the 9900. The Coventry dealership has made some sensible choices that allow the newcomer to adopt a versatile role.

Principle are a move to offering the 9700 only on two axles, and the selection of a mid-range trim level for stock coaches.

Consideration of PSVAR is imperative in this segment, and when specified as such the 9700 is potentially a seven-day-week coach. Private hire, home-to-school, tour and rail replacement work are all well within its skillset.

Like the 9900, the 9700 holds a distinctive look, and as a complete Volvo product it has potential to deliver good residual values. The opportunity for it to be supported in its entirety via the Volvo dealership network will also be attractive. Volvo offers a lot already in this part of the market, but the 9700 is a strong addition to the right-hand drive range.

routeone Team - June 28, 2022
David Heptinstall has been appointed Engineering Director by Stagecoach Manchester. He joins from Stagecoach Yorkshire, where he held the same role from 2016. Mr Heptinstall...