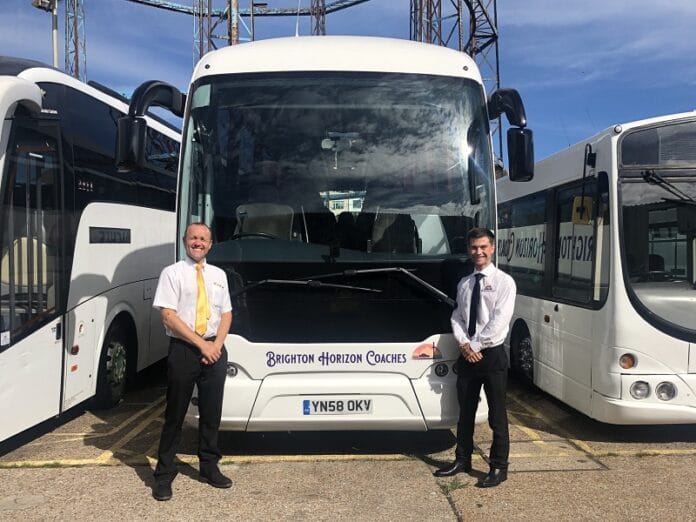 Ryan Wrotny is the Coach Services Manager at the newly launched Brighton Horizon Coaches. One month on from its launch, The business is settled into its new depot and ready for the future.

It is a busy day for Ryan Wrotny, Coach Services Manager at the recently formed Brighton Horizon Coaches. One month on from its launch at the Brighton seafront [routeone/news/5 August], the company is completing the move to its new depot in Ringmer (formerly part of Seaford and District) and is adding the finishing touches to its rebranded fleet of 11 vehicles.

At 25 years old, Ryan is likely one of the youngest managers of such an outfit in the country. Already the business is showing the green shoots of growth under his auspices, despite the ongoing pandemic. He has big ideas for where he wants to take Brighton Horizon Coaches, and on what this new venture means for the city.

It’s not only moving to the new depot and redecorating the office that has been on Ryan’s plate. He has the return of schools to think about in addition to the growing number of enquiries for day trips, ensuring vehicles are rebranded and inspected in preparation for service.

Ryan is proof that the coach and bus industry is almost a calling. Most young people don’t enter the industry when they walk out of the job centre – they are in it because they pursue a love of vehicles, or an interest in public transport. Both were true of Ryan, who from a young age took an interest in transport and trained his sights on coach and bus. At the age of 13, while at Portslade Community College, he took out a share in The Big Lemon, and so began his journey.

“Ryan pretty much recruited himself,” says Chief Executive of The Big Lemon Tom Druitt, who Ryan says has been his primary role model growing up. “He came to the depot at the age of 13 and asked if he could buy a share in the company – then when he left school, sat me down and told me he was starting on Monday and needed to know what his job is going to be.”

The potential in Ryan was obvious from that point on. His work for the Big Lemon involved taking command of private hire and coach bookings, invoicing and eventually driving – first on buses before moving towards the operation of the coach arm of the business. With the merger of Seaford and District and The Big Lemon, the time was right for a rebrand into Brighton Horizon Coaches, and Ryan was the natural choice to lead it.

“My initial attraction was buses,” Ryan admits. “But it developed into coaches as I discovered there’s a big world out there. I love discovering new places, and coaches fit that passion.”

But nothing is simple in the running of a coach business, and The Big Lemon has not had an easier time than any others during the global pandemic. “You could tell from the start this would hit the coach industry hard,” Ryan says. “The leisure bookings were the first to go. The closure of schools was the final nail in the coffin.”

Assuming summer would be a write off, The Big Lemon formed a ‘COVID-19 plan’ in February. When the schools closed, it was time to ‘batten down the hatches’ as Ryan describes it. Under the plan, two outcomes were accounted for – a 50% loss of work, or a 100% loss of work. Most in the industry will be able to guess which outcome happened – not the better of the two.

Vehicles were laid up and finance holidays arranged. Every single large cost was reduced if possible. Fortunately, rail replacement and the Coronavirus Job Retention Scheme provided a lifeline.

But the signs are changing, Ryan says positively. Private hire is returning and each day the business reports four or five quotes for day trips. Most are for next year, though some are for late 2020. The business has already completed a number of coach trips – two during the August bank holiday weekend and two the week before.

It is not the landscape of success Ryan was anticipating at the start of the year, but no work can be discredited now. The weekend saw 29-seater minicoaches used for a couple of evening trips, which highlighted a wariness that still exists around coronavirus COVID-19. “People are still wary of travelling in big groups,” Ryan says. “Realistically we had 15 people on board those vehicles. But it’s nice to get your foot back in the door and see that some confidence in group travel is coming back.”

Quotations have been building since the middle of July, and with physical work returning in the last couple of weeks, Ryan has confidence the work will continue to grow. Bolstering those hopes was the confirmation and start of a hospital contract in Surrey on 1 September, conversations for which began in January. “I thought COVID-19 would spell the end of that,” Ryan adds.

Now, at the time of publication, the repainting of Brighton Horizon’s 11-strong fleet should be complete. All are now based at the Ringmer depot and fit for service, with branding completed on five ensuring the name is becoming a presence in the area. Redecorations of the temporary office, installation of new phone lines, broadband and flooring will make a more attractive and comfortable base for staff ready for the first day of service.

Eyes on the future

As with any new coach operation, Ryan is exploring options around new technology and what direction he wants to take the business.

Technology wise, he has plans to integrate a tracking system this winter, whereby customers receive a private link up to an hour before each job. This will allow customers to see where their vehicle is on a live map, with the distance and expected time offering more confidence to customers.

Where big progress has been made is cleaning up the fleet. That was one of the first goals. “When I took over, the first thing I wanted to do was change the image we had from running a fleet of 25-year-old coaches and build a modern, clean image. At the moment we are achieving that.”

“It needs to happen,” Ryan explains. “I’m glad the industry is moving towards Euro VI. A lot will grumble, and fret over the cost. But I’m the complete opposite. It needs to happen and I’m glad cities are enforcing emission control zones. If this wasn’t enforced, fewer people would upgrade. Overall, I believe the benefits of cleaner vehicles will outweigh the cost of investment.”

Upgrading the fleet is in line with Tom’s wider vision of putting Brighton back on the map within the coach industry. For years there has been no Brighton-based coach company with the city’s name on its fleet – not since Go-Ahead rebranded its venture.

Ryan is keen to express his gratitude to Tom, who has been a role model since he joined the business. “He believed in me,” he says. “This is a very male, and older male for that matter, dominated industry. For someone to believe in someone so young was inspiring.

“Tom kept me engaged and proactive. In return, that kept me interested. At the time, The Big Lemon was in its early days. He was keen people to engage in the business and to encourage support.”

For young people seeking to follow in his footsteps, Ryan says: Never give up. Tomorrow’s talent lies in the young people leaving school with a passion for transport and for the industry and its vehicles. The advent of social media is playing a part in helping those people articulate their vision. “If you show that passion from a young age, people will recognise that you want to succeed and make this industry better.”

Indeed, Ryan acknowledges that he has felt that coach operators can be set in their ways. It can be difficult to change that. “But if you don’t change with the times, you fall behind the times. When that catches up with you, it can be your downfall.”

Heavy vehicle testing review by DfT and DVSA gets underway