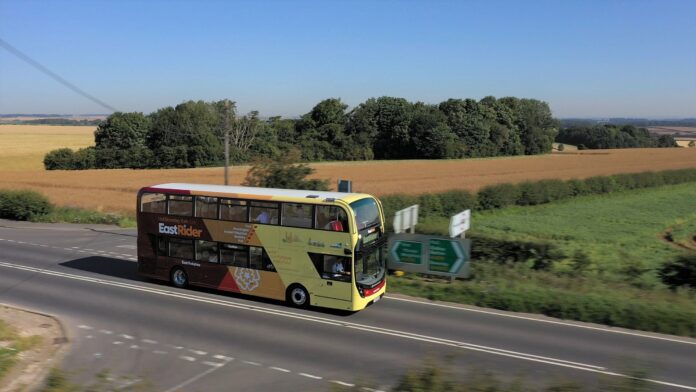 East Yorkshire has taken delivery of eight Alexander Dennis Enviro400s that are equipped with internal cycle storage. They entered services on routes between Hull, Beverley and York and between Bridlington, Driffield and York on Monday 10 August and represent an investment of £2m.

Cycles are carried for no charge. Other passenger-friendly aspects of the buses include USB and wireless charging, next-stop announcements and high-specification interiors with tables. The specification will soon be further bolstered when passengers are able to stream media to their own devices from an onboard entertainment system.

East Yorkshire hopes that the new buses’ provision for safe cycle storage will dovetail with the increasing popularity of cycling among both the public and politicians.

Says Area Director Ben Gilligan: “It opens up huge possibilities for both commuters and those who cycle for fun to make the most of the endless opportunities for cycling in our amazing part of the country.”

Go-Ahead Group subsidiary East Yorkshire has also specified rear-view cameras on the new buses in place of conventional mirrors. Passengers travelling to York can buy add-on tickets for the City Sightseeing operation there, or for through travel to places such at Leeds using Transdev Blazefield’s CityZap and Coastliner services.