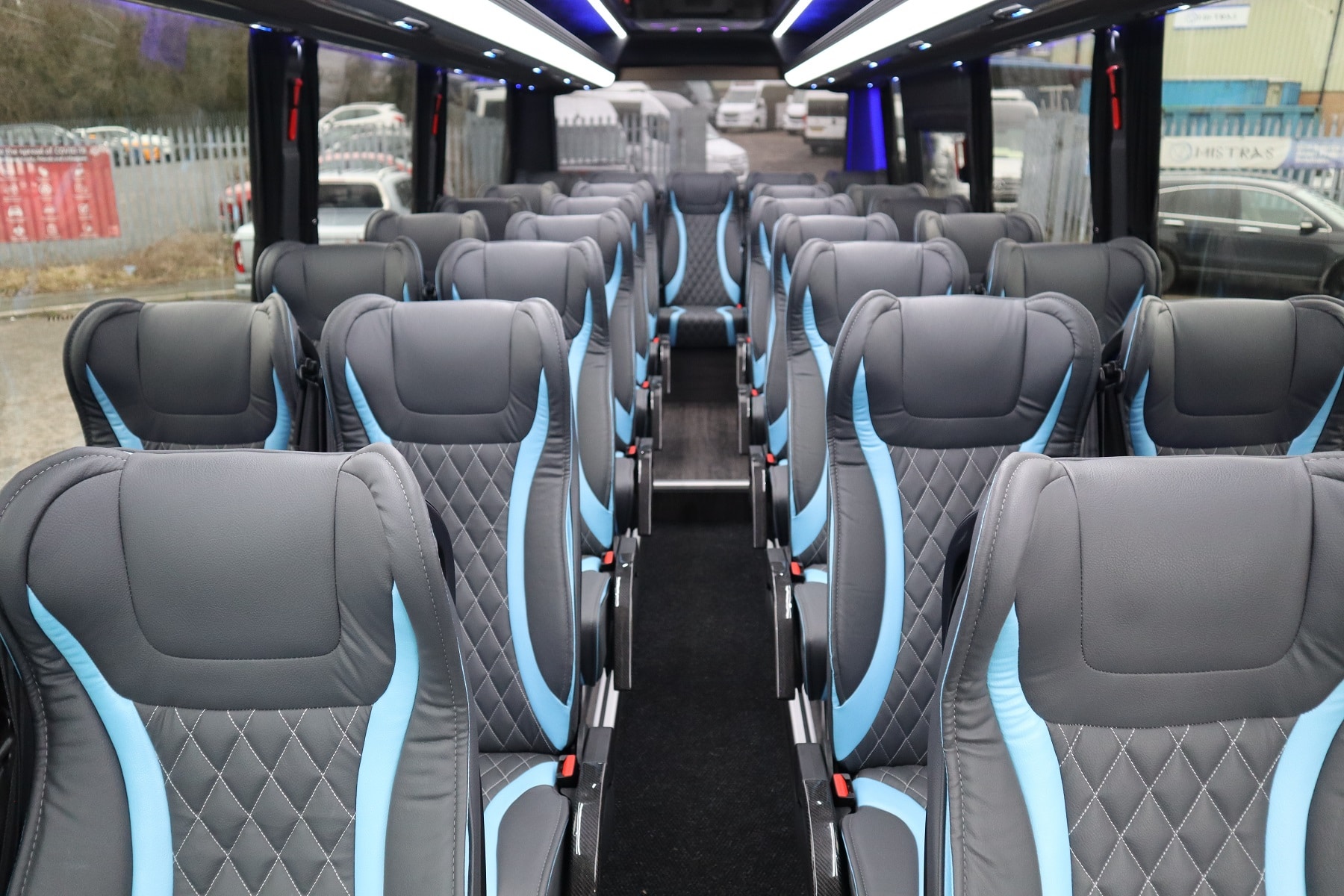 Among vehicle suppliers that have kept their foot on the accelerator during the COVID-19 pandemic is Ilesbus UK. It continues to see interest in its smaller vehicle range. In the Mercedes-Benz Sprinter-based I-City low-floor minibus and a PSVAR-compliant variant of its Iveco Daily-mounted Glance, it recently added two new models.

Both have been well received. The PSVAR Glance has drawn several orders. Reays Coaches has signed for three I-City minibuses, and the demonstrator has a busy diary ahead.

Ilesbus UK has been at its Pyle base in South Wales for around three years. The factory in Turkey now has a capacity of up to 400 vehicles per annum.

Appointments have been made to the UK sales team and JJ Kavanagh Coach and Bus Sales has become the brand’s representative on the island of Ireland.

The PSVAR-compliant Glance and the I-City represent a diversification of Ilesbus UK’s earlier approach. Pre-pandemic, its focus was on the tourism market. That sector remains key, and it is possible that a coachbuilt Sprinter-based minicoach will arrive later. But in the shorter term, customer interest is building around vehicles that suit diverse applications.

“Since COVID-19 broke we have expanded our model range to satisfy home-to-school transport and PSVAR-compliant needs and added the I-City,” sales Ilesbus UK Director Gary Johns. “The I-City has been developed specifically for the UK and Irish market.”

Both the PSVAR-compliant Glance and the I-City are fully finished at the Ilesbus factory in Bursa, with one exception: The destination display equipment. It is added after arrival in the UK.

Ilesbus keeps a quantity of right-hand drive Sprinter base vehicles in Turkey to speed the production process. All touch UK soil before being shipped. As a result, they come with an OEM three-year warranty.

Iveco does not require the same of its Daily chassis and they are thus transported directly to Turkey, but the OEM warranty period is the same as the Sprinter’s. Ilesbus provides a matching three years’ coverage on the I-City and the Glance.

Ilesbus I-City: A new contender in the low-floor minibus sector

The 5,500kg GVW Ilesbus I-City comes in two lengths. The demonstrator is built on an XLWB Sprinter to give 17 passenger seats and space for nine standees. Alternatively, a 50cm rear extension enables a seated capacity of 20 with seven standees. The extension can also be used as a boot area.

That choice hints at the extent of options available on the I-City. It shares several items with the Vegas minicoach, but there is scope to delete some if price is the primary consideration.

The most obvious commonalities are the grille and the side glazing, with its cosmetic ‘dip’ towards the rear. Closer examination shows that other aspects are also shared between the two models, including body kit.

The demonstrator’s boot lid is for cosmetic effect only, as the back row of seats is tight against it. If preferred, the OEM rear doors can be retained. The top-hinged lid is secured by the factory-fit lower fixings that would accommodate them.

A reversing camera is within a rear spoiler and six other cameras are inside and outside the I-City. They are connected to a small colour monitor mounted on the A-pillar and a 1TB hard drive.

The entrance is wide, with a two-piece Anlaş Kalip door. Anlaş also provides the fold-out ramp, which has a weight limit of 350kg. It is within part of the floor that is slightly angled downwards. Where that section joins the flat part behind it, a minor lip is evident. Flooring throughout is wood effect.

Opposite the door is a wheelchair user bay with three tip-up seats. A further tip-up position is on the nearside immediately behind the door. USB charging points are provided throughout.

In the raised section of the I-City demonstrator are 13 forward-facing GRL seats. They are to a mid-range specification with high backs, three-point belts and armrests. Ilesbus can fit those that are used in its minicoaches if desired. Above is a roof-mounted handrail for standees.

Double glazing is standard and it is available in various tint levels. The I-City also has a comprehensive heating and cooling system.

A roof-mounted air-conditioning unit that vents via the coving panels is complemented by a 5kW dash fitting and an Eberspächer heater booster. Within the wheelchair user bay is a convector radiator.

Cab access is only from the offside. Ilesbus fits a fixed anti-assault screen above a cash tray, and ahead of that it adds a ticket machine mounting plate. To the left of the cab is a luggage area. The OEM windscreen is retained during the conversion.

MBUX as standard on I-City; rear air suspension is optional

The Mercedes-Benz MBUX touch-screen unit is part of the I-City specification. It includes a variety of functions; most relevant for passengers and drivers is a radio. That is connected to speakers throughout the saloon. Other MBUX capabilities include satellite navigation, a vehicle manual and the control of various settings.

Ilesbus can optionally specify OEM rear air suspension on Sprinters that are built to order by Mercedes-Benz. As an alternative, it can retrofit equipment from VB-Airsuspension to stock examples. The demonstrator has destination display units from a Turkish supplier, but production vehicles will have either Hanover or Mobitec equipment.

The I-City uses the 2.2-litre OM 651 engine developing 163bhp. It is coupled to the 7G-Tronic automatic gearbox, with gear selection via a stalk. Engine stop/start is fitted, but it can be disabled. With this driveline the Sprinter is a known quantity. It is a smooth and keen performer.

To the demonstrator’s specification the I-City retails at £88,500, but there is scope to adjust that figure downwards if the specification is reduced.

In Euro VI form, the Iveco Daily has proved popular in the 25-29-seater segment. That is helped by its refined driveline. Although the Daily is front-engined, noise levels are low.

To PSVAR-compliant layout the Ilesbus Glance can carry a maximum of 29 passengers and a courier.

The demonstrator’s GRL seats are finished in synthetic leather and they are well specified. That includes drop-down tables, three-point belts, magazine nets and armrests.

A D’Hollandia lift is mounted behind the rear axle. Its weight limit is 350kg. A large top-to-bottom door gives access to both the lift and the docking area. A tip-up chequer plate step is also within that opening.

Two seat pairs here are mounted on NMI quick-release legs, although thanks to row spacing in this part of the vehicle it may be necessary to remove only one to accommodate some wheelchair users.

The main door is from Anlaş Kalip. As with other Daily-based midicoaches, the Glance’s platform area is clear, and it is not impacted by the engine location.

Ilesbus Glance comes with lots as standard, and PSVAR optionally

Climate control is via a combination of a roof-mounted air-conditioning unit and perimeter radiators, with an Eberspächer auxiliary heater. The gangway is sunken, although Ilesbus can realign it away from the centre to accommodate 2+1 seating with captain’s chairs.

The demonstrator has a dark interior colour scheme, although a yellow grab rail by the door is slightly incongruous. Seats are black with diamond stitching and pleasing blue trim.

The LED strip lights within the step up from the gangway are also blue. Further strip lights are in both the roof and the luggage rack edges. Downlights are under the windowsills.

Curtains and the suede side panel coverings are also black, and the dark theme continues in the wood-effect flooring. Contrast is provided by many small ‘fin’ lights within the ceiling. They can be set to a variety of colours using a remote control.

Wall-mounted USB charging points are standard, while Ilesbus can add an inverter and 240v sockets as an option. A drop-down monitor is fitted. It is connected to a dash-mounted touch-screen control unit that includes a DVD player, satellite navigation and other functions.

The manufacturer offers different boot sizes to suit luggage carrying requirements, while storage is also provided within side lockers.

Chassis-wise, Ilesbus UK specifies rear air suspension and an electric handbrake. A Telma retarder is also part of the package, as are LED headlights and dash-mounted cab air-conditioning.

The Iveco driver’s seat is replaced with a higher-specification air suspended example. The large signalling window is powered, as are the mirrors. The latter are also heated, although they are slightly obstructed on both sides by the pillar arrangement.

Controls for the body are mounted to the driver’s right and chassis buttons to the left. Two manual windscreen blinds are fitted and there is sufficient space behind the seat for a bag.

No shortage of power in Glance with 210bhp engine

Ilesbus has chosen the 210bhp variant of the 3.0-litre F1C engine for the Glance. It develops 470Nm of torque. That is marshalled well by the eight-speed Hi-Matic automatic gearbox.

The additional 30bhp is noticeable over the 180bhp rating previously used by some manufacturers.

When joining the M4 near Bridgend, an uphill slip road was tackled with ease, and 62mph was achieved before reaching the running lanes.

Although the Glance looks quite tall, it holds the road well. Rear air suspension mitigates what can otherwise be a lively ride in that part of a lightly laden front-engined vehicle and the overall passenger environment is good.

The Daily-based segment has become hotly-contested over the past couple of years but the Glance – particularly in PSVAR-compliant layout – can certainly hold its own.