Home Environment Newport Bus: Move to electric ‘can only be done via partnership’ 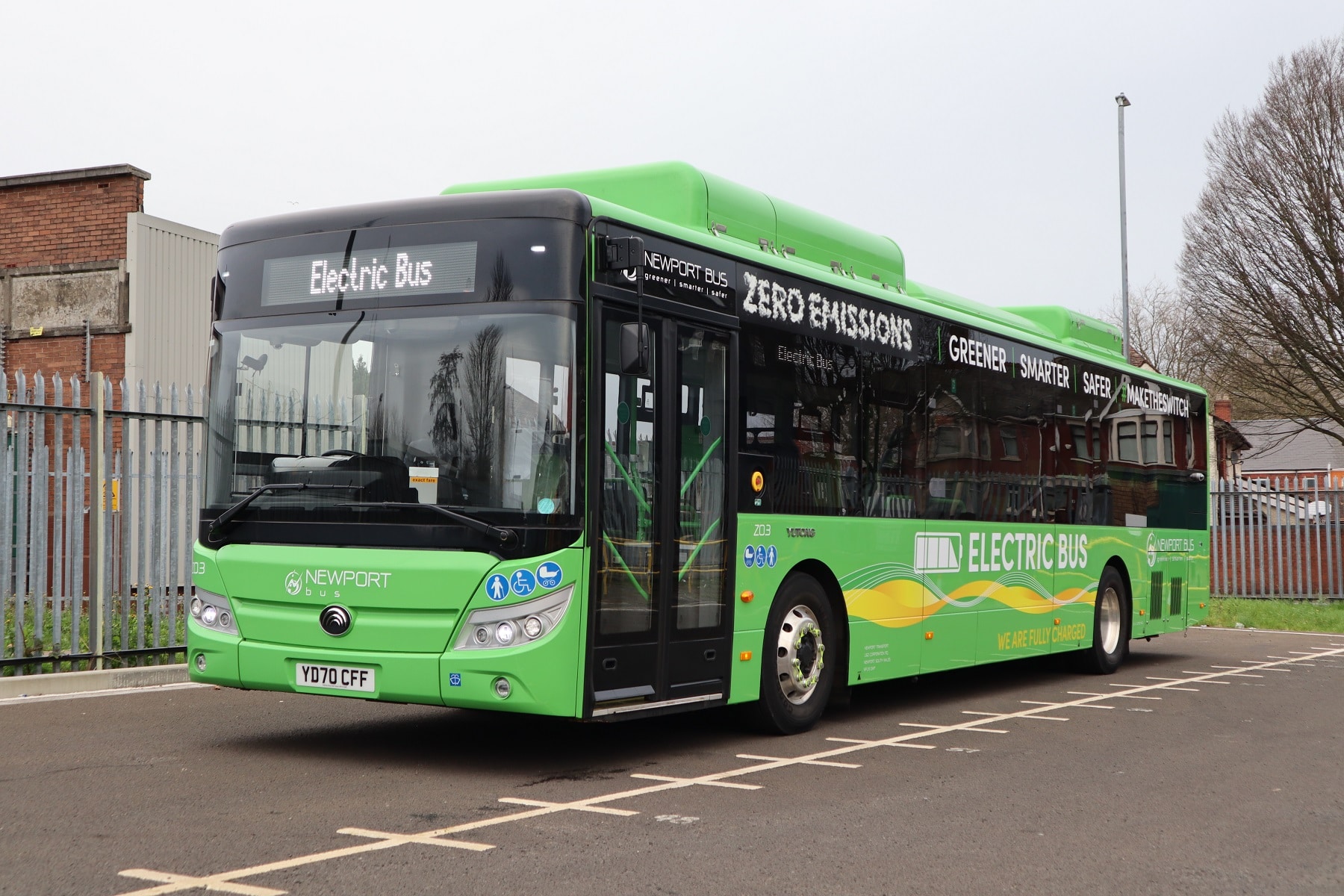 Newport Bus is the clear leader in Wales’s early moves towards zero-emission (ZE) electric buses. It is the first operator there to achieve modern-day emission-free squadron service, with 15 battery-electric Yutong E12s helping to redefine the economics of ZE operation.

The first E12 – a former demonstrator – entered service in 2019. It was followed in 2020 by 14 production examples. All are the fruits of a deep-seated partnership between Newport Bus, vehicle supplier Pelican Bus and Coach and Zenobe Energy.

Experience with the first E12 gave the operator a good breadth of knowledge of ZE operation. The additional 14 build on that. They have allowed Newport Bus to add weight to its plans to convert to entirely ZE operation. Notably, data shows that the E12s may suit some interurban use as well as they do urban utilisation.

That has come about thanks to lower than anticipated energy consumption. But other aspects of ZE operation are also contributing data demonstrating that the wholesale transition may be less stressful than might have been anticipated 18 months ago, says Managing Director Scott Pearson.

Long-term partnership is key to electric bus success in Newport

The basis for Newport Bus’s move to ZE operation is partnership. Pelican has supplied and supports the Yutongs. Zenobe is responsible for their batteries and everything relating to energy supply and charging. In effect, the operator’s responsibility in the latter regard extends no further than ensuring that the buses are plugged in correctly each evening.

Where batteries factor in is important. Besides those onboard the E12s, a Tesla energy storage plant is located within a dedicated part of the Corporation Road garage. That area is air-conditioned to ensure that it does not exceed a certain temperature.

None of the batteries – either bus-mounted or stationary – are owned by Newport Bus. They are Zenobe’s property and paid for by the operator through a monthly charge levied by the supplier.

Of the 14 production E12s with Newport Bus, seven have been purchased on a fully commercial basis. The other seven were part funded through an Ultra-Low Emission Bus Scheme grant. That money was initially for only one bus, but negotiation involving the three partners, the Department for Transport and LowCVP expanded its reach to seven vehicles.

Scott sees devolving responsibility for batteries and power supply to Zenobe as a similar mechanism to the supply of diesel and its associated dispensing equipment. “We purchase that from specialist suppliers. Why would I not want to do the same with electricity?”

Long-term savings also come through a reduced maintenance spend and an enhanced vehicle lifespan. The E12s will be depreciated by Newport Bus over 16 years. Other single-deckers in its fleet are written down over 12 years.

“We examined the E12 closely and its build quality is good. It is subject to extensive anti-corrosion treatment at the build stage. Also important is the lack of an engine. That means there is no vibration through the chassis or the driveline mountings, which is important for longevity,” says Scott.

Maintenance savings over the life of an electric bus are also significant. While a change of batteries has been factored into overall costings, it is difficult to see that any other driveline component will require outright replacement over a 16-year lifespan.

“The engineering saving is also in time,” he continues. “There are not the same number of things to check, maintain and replace on an electric bus when compared to a diesel.”

While the full extent of maintenance efficiencies will become apparent only as the E12s age, the aspiration is clear: “Our target is to have fuel and engineering savings that outweigh the additional costs of batteries, infrastructure, and then some,” says Scott.

Existing work provides a blueprint for 100% transition to ZE

Whole-life financials of the on-bus batteries are aided by the arrangement with Zenobe. Once they are no longer suitable for on-road use the supplier can move them to a less demanding second role.

The stationary batteries within the depot are involved with Zenobe’s wider activities of buying grid power when demand is low and selling it back at peak times.

But they also charge from solar panels on the roof of the depot, supplementing available grid capacity for charging and contributing to the operator’s environmental credentials.

As the Newport Bus battery-electric fleet grows – and Scott is adamant that it will, and soon – the cumulative savings will also increase.

But there is one fly in the ointment currently: Depot space for charging units. Locating them requires a more regimented approach to parking.

“The plateau of how far we can go with fleet-wide conversion will come when we run out of space here,” he says. Scott estimates that Corporation Road can comfortably take 70 charging units. Newport Bus’s fleet size is around 100.

“We aspire to move to a new location to get past that point. Our tentative plans are for a combined depot and park-and-ride site near the M4. One of the benefits there would be the ability to design the facility around the needs of ZE buses. We would want to place a solar panel farm next to it.”

Currently many of Newport Bus’s duties are restricted to satisfy restrictions imposed by the Welsh Government relating to coronavirus COVID-19. But since the production E12s entered service in September 2020, much real-world experience has been generated.

Passenger and driver acceptance levels remain high and engineers have found the buses easy to work on. While at the time of writing the 14 production E12s had not been subject to harsh weather, the ex-demonstrator worked through the 2019/20 winter with no issue.

Scott has little worry about the effect of low temperatures on range. He points out that in Yutong’s home market of China, it has many years’ experience of battery-electric bus operation in conditions that are more extreme than those found in the UK.

The headline to be pulled from ongoing analysis of the buses’ performance relates to their energy consumption. It has averaged 0.94kW/h per km, significantly less than Newport Bus had expected.

Pelican suggests that the 422kW/h batteries fitted to the 14 production E12s should not be taken below a 12% state of charge, which if observed gives 371kW/h of usable power.

It is those figures that give Scott the confidence that the buses should be able to handle full-day duties on services to Cardiff, contrary to what was first expected. Trial use will start soon. “That change of mind is based on the amount of power left in the batteries when the production buses were driven to Newport from Pelican’s base in Yorkshire,” he says.

While higher-speed use has implications on the extent of energy regeneration that can be achieved, the considerable rolling resistance of a diesel driveline is absent from an electric bus. As a result, energy consumption when cruising is modest for the EV.

If the E12 trial on services to Cardiff goes well, the next step will be to evaluate them on a similar route to Chepstow. But regardless of how that proceeds, Newport Bus now has a pathway to 100% zero-emission operation.

It has recently evaluated a shorter E10 demonstrator on routes that an E12 cannot navigate. Both Pelican and Zenobe are aware of its tentative timetable for expansion of Newport’s ZE fleet. Scott does not rule out the addition of hydrogen fuel cell-electric power in the long-term, but currently the focus is on battery-electric.

“Our experience so far gives me great confidence that when we move to the second phase of ZE conversion, we will witness a ‘plug and play’ rollout with the same high level of service and quality from our partners.

“Partnership is key to this project. We are a company with a turnover of £10m. Without a collaborative approach this transition would not be possible. We have been able to de-risk the process and bring capital expenditure to a manageable level because of it.”

Ralph Roberts to continue as CPT President in 2023