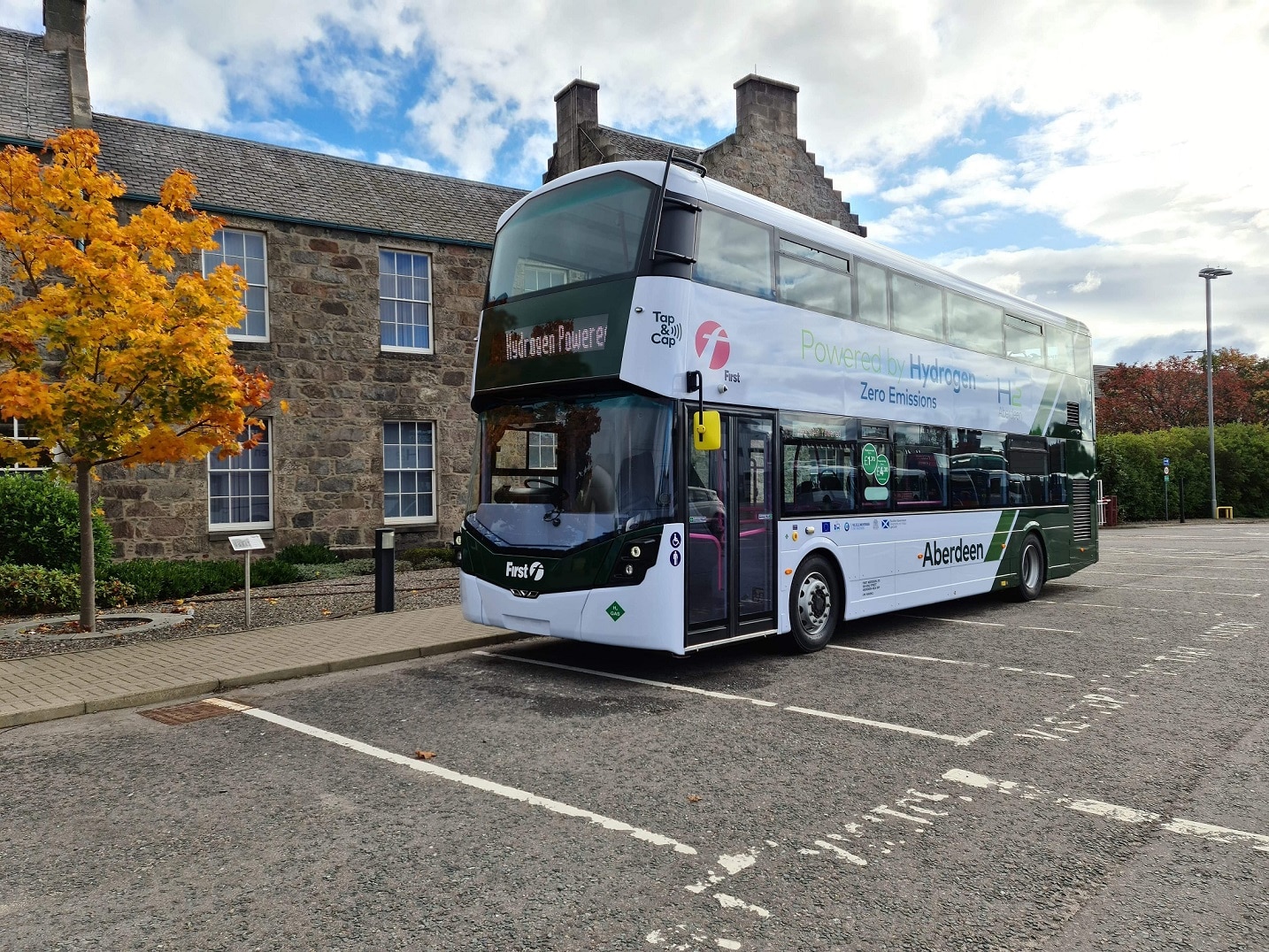 Work to grow Scotland’s zero-emission bus fleet is proceeding well. Significant orders have been placed with help from the first round of the Scottish Ultra-Low Emission Bus Scheme (SULEBS), and winners of the second round of £25m will soon be announced.

First Bus’s operations are prominent among the early stages of this transition. 15 hydrogen fuel cell-electric Wrightbus StreetDeck FCEVs have entered service in Aberdeen, while in Glasgow an order for 22 battery-electric BYD ADL Enviro200EVs has been placed thanks to SULEBS. They will join two existing examples.

First Glasgow has also submitted a bid to SULEBS round two, and separately the group is in what Managing Director for Scotland Andrew Jarvis describes as “early talks” with Aberdeen City Council around further StreetDeck FCEVs.

Vehicles are big ticket items. But Andrew places equal emphasis on other elements of zero-emission operation that require major consideration from operators and suppliers. He also points out that while zero-emission buses are currently a trending topic for politicians, there will be no magic wholesale switch – and economic reality means that the newest diesels still have a long-term future.

Much more than vehicles in zero-emission bus shift

Infrastructure is a major consideration that goes with emission-free operation, along with upskilling staff and ensuring that vehicles are scheduled effectively. It is also imperative that manufacturers continue their work to increase range, adds Andrew.

For the 22 Enviro200EVs due for Glasgow, around £1m of investment in charging and associated infrastructure is necessary.

All 24 of the type will run from Caledonia depot. Were Caledonia’s entire fleet to be converted to battery-electric, it would draw as much peak power as a town of 7,000 households.

Part of First’s learning already is that while external infrastructure can be upgraded, guaranteed usage is needed from the get-go if the electricity supplier is to agree to what the operator wants. That can complicate a phased transition to battery-electric.

“That market has still got to mature somewhat. What we don’t want is to dig up a road six times to keep putting in bigger cables. It would be better to install the right cable for the six-year point, but not many planning horizons work on that level,” says Andrew.

First can already understand what grid capacity is available and where. But a major part of a switch from diesel is that a lot must be paid for besides vehicles. “Some of it is big numbers, whereas diesel buses run on what is there already. The only bodies that have deep enough pockets to help are governments.”

‘Onus is on OEMs to deliver zero-emission bus range increase’

When transitioning to zero-emission buses, thought must also go into scheduling. First wants them to behave like a diesel. Andrew believes that if an operator needs a 300-mile zero-emission range, the onus lies with manufacturers to ultimately deliver that.

“Technology has to allow for the commercial offer that we want to provide customers. But there are things that we can do in the margins,” he adds. That may include swapping vehicles when drivers take over the final piece of a late duty. It could also involve retaining a small number of diesel buses on some routes for as long as possible, something that is considered in First’s second SULEBS bid.

“We can do things in the evening to allow that to happen. But ultimately, we will want to have more and more operation that is zero-emission.”

There is evidence that vehicle development is progressing. Andrew points to the earlier hydrogen fuel cell-electric buses that ran in Aberdeen, a batch of Van Hool A330Hs.

The second phase – formed of the 15 StreetDeck FCEVs – represents a “huge advancement.” He muses whether a third phase could involve further repackaging to cut weight and add hydrogen storage to deliver a range of 300 miles with the same passenger capacity. If so, it would have the potential to change the game.

Diesel still has major part to play for foreseeable future

In Scotland, First has 17 zero-emission buses in service out of a total of around 1,300. Diesel thus has a future until the group’s 2035 deadline for an entirely emission-free fleet. That is thanks to the economics of transitioning on such a scale, and the reality for many Euro V and all Euro VI diesel buses. They have a lot of life left, and it would be wasteful to discard them prematurely.

“The move to zero-emission will start with displacing Euro III buses and move through newer diesel vehicles. But clearly, we cannot replace them all immediately. Nor would it be right to,” says Andrew.

Transport Scotland’s Bus Emissions Abatement Retrofit programme for Euro VI upgrades has served First well. Fourth or fifth rounds would be of great interest, he continues. Around 250 buses in the group’s Scotland fleets that are not already part of retrofit plans would potentially benefit.

“You would surely do that and try to replace the oldest vehicles with battery- or hydrogen fuel cell-electric,” he adds.

Collaborating with operators of other vehicle types that may wish to use First’s infrastructure at times when it is idle may assist with the financials of the zero-emission move. Similarly, ‘bus-to-grid’ charging may benefit. While some things are not yet clear with the concept, Andrew does not rule its uptake out. All form part of the inevitable steep learning curve to come.