Home Features 30 Years of Uno: ‘The university bus for everyone’ 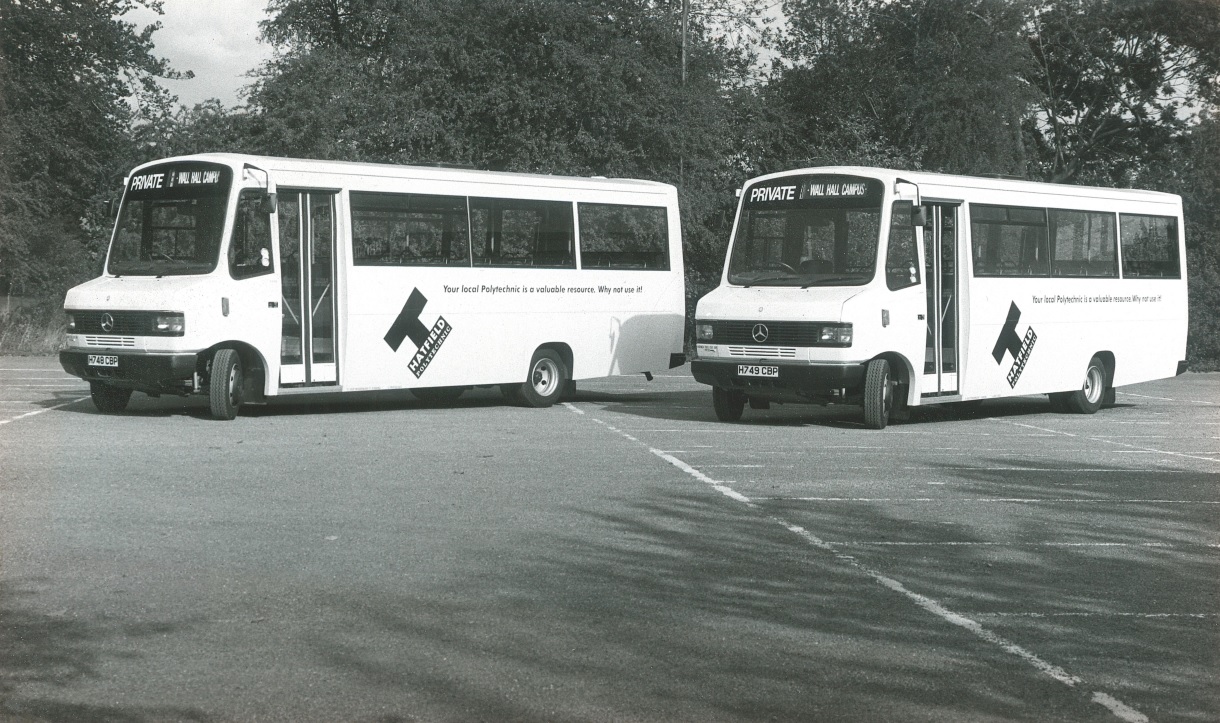 Thirty years ago, Uno – then UniversityBus – was formed as the UK’s first university-owned commercial bus company. We reflect on its achievements since then

In March, Uno celebrated its 30-year anniversary with a special photoshoot: 11 vehicles arranged into a three and a zero, with each vehicle representing one of the company’s routes. In another photo, a bus is photographed behind a bank of daffodils, in a springtime illustration of renewal.

The idea belonged to Uno’s Commercial Manager, Ed Cameron, who saw the shoot as an opportunity to reflect on what Uno has achieved over the past three decades, while also restoring momentum felt before COVID-19. routeone paid a visit to the company’s depot in Hatfield, to reflect on those achievements.

Uno is reasonably youthful in the bus sector with a unique claim in being the first university-owned commercially operated bus network in the country. It grew from a shuttle bus service inherited by the University of Hertfordshire’s previous incarnation, Hatfield Polytechnic, which ran between its Wall Hall and Hatfield campuses during a time when the demise of London Country left a void in public transport provision.

Under Polytechnic staff the service ran between Wall Hall campus, Radlett and Hatfield, and eventually a route began between Watford, Radlett and Hatfield which became Uno’s core 602 service. At the time, and appropriately as Hatfield Polytechnic moved away from its aeronautical engineering base to become the University of Hertfordshire in 1992, so too did the bus company grow and mature. The service’s founders – Secretary and Registrar of the University Philip Waters, and Chief Operating Officer and Chair of the Board Terry Neville, with support from Vice Chancellor Sir Tim Wilson – decided to incorporate the service as UniversityBus.

The University apparently recognised a good idea when it saw one, particularly as easy transport helped to recruit students. Things led to the introduction of the London 614 (rebranded The Comet in 2017) service and the 635 service into Hitchin, which grew rapidly – so much so that, through the 1990s, the bones of the future Uno’s network were established, and the business grew quickly.

There were interesting vehicle purchases at the time, including four Blue Bird All American school buses, (considered safe for students, albeit thirsty at an efficiency of 4mpg). There was no particularly uniform pattern to vehicle acquisition in the 1990s, but investment into a variety of new buses such as Dennis Darts, and two Mercedes-Benz chassis Wrightbus Crusaders. In building up a local network, UniversityBus recruited many ex-London Country staff and managers, such as General Manager Michael Finn, who brought expertise to the business over a period of 20 years.

In the early 2000s, a stated desire came about to professionalise the company even further. A board structure was developed which brought in members from outside the University. Non-executive appointments included Ian Morgan from Trentbarton, and Gordon Tenant, who brought a level of expertise and who were responsible for guiding the business and setting it on a new path. ALBUM Chair Bill Hiron of Stephensons of Essex, predecessor to incumbent Managing Director (MD) Jim Thorpe, undertook the role of MD part time.

In a watershed moment, Ray Stenning and the Best Impressions team were recruited to give the business its new identity in 2005, when UniversityBus became known as Uno.

According to present MD Jim, that identity change drove much of the dynamism in the business. “It happened very quickly,” he recalls. “The business engaged Ray, who came up with this idea to rebrand the business, change the colours, the name, the stationary and the corporate feel, and the Board agreed and approved it. In about three months, we repainted about 60 vehicles. It was a quick programme. After that, we introduced a fleet replacement programme, looked outside the organic Hertfordshire network for commercial opportunities, and looked at developing the model because there was a view that it was relevant to other parts of the country.”

That was key to Jim’s brief when he joined in 2009, returning to the industry after having worked both at his own family coach company and for FirstGroup in London. Looking at commercial opportunities outside of the network’s normal area was key to Uno’s continuing evolution; it began a joint venture with the University of Northampton in 2012, which operates today with 15 buses and some 40 staff members. One year later, it did the same at Cranfield University with the launch of Cranfield Connect. New horizons came when Uno tendered for London bus routes and won its first, the 383, in 2015, and as of 2019, Uno operates five electric buses for Transport for London on school routes, which gave the business its first step into zero-emission operations.

That growth came without the company ever taking its eye off its core market, that being the student population at the University of Hertfordshire. The company remains owned by the University and its network radiates from that field. For Jim, that has been a springboard to good things. “It may be our core market, but we obviously have a whole range of customers. That focus gives a lot of benefit to everybody else in Hertfordshire, and if we didn’t have the student market, I’m not sure we would have such an extensive network.

“Commuters, schoolchildren, and general bus users get the benefit of that commercial service. And I think you can say that, because we talk about the 602 spine route, that is a seven-day service that runs every single day, people rely on it outside of the University community. That is a nice dimension to this business.”

That core market of young people through the University may also be working to inspire loyal generations of customers. Both Ed and Jim acknowledge that the better public transport provision is, the more likely those passengers may not turn with such enthusiasm to private car ownership. “A lot of the research suggests that if people start using buses when they are young, they generally carry that on through their whole life,” Jim explains.

A marker in the ground

Jim and Ed are now able to reflect on what they are most proud of over the last 30 years. That includes establishing links and transport for Hertfordshire where there weren’t any before, which after 30 years has seen Uno become an embedded part of public transport provision in the county. Not bad for a service which began as a campus-to-campus shuttle bus. Jim believes Uno’s story up to this point speaks of its agility and ability to adapt to changes and challenges – and there will be plenty more to come, with the changing travel patterns from the pandemic just one of them. “One of the things we can be most proud of is the strength of our brand,” he says. “And it’s not just our brand – it’s what’s behind the brand. It’s what people like Ed and the team do every day to make this a customer-focused business. That’s not just the management team but the drivers, support staff, cleaners, supervisors, engineers and so on. They are all pushing in the right direction. That’s what makes it a powerful force.”

For Ed, the anniversary is an opportunity to speak not only about the business’ past achievements but to look forward and provide the confidence that Uno will still be here in another 30 years. To recognise that, the company put together a booklet with various statistics, including the number of its student travellers, ticket rolls, and litres of cleaner used in the bus wash each year (it’s 1,000). Also notable is the length of service of Uno’s staff – 53 members have worked with the company between 10 and 20 years. Recognising that is a message of thanks from the business to its staff.

From the challenge of COVID-19, where Uno’s operating capacity dropped to a quarter of what it would be normally, the business now is grasping the exciting challenges of the future with both hands. Jim reveals Uno is enthusiastic about the move to a net-zero position, despite uncertainties about diesel cut-off dates and whether the range requirements will exist. “What we do know is it’s moving in that direction, and for good reasons,” he says. “We’re invested in that and planning for it, and we’ve already made the first few steps along that path.”

But more immediate a challenge is of course the change in travel patterns post-pandemic. That gives Uno the chance to reflect not just on the scheduled bus network it provides, but the information, ticketing, and demand-responsive transport service it operates in East Hertfordshire which integrates with the rest of its buses. “Those are the things we’re going to have to refine, develop and evolve over the next few years,” Jim ponders. “That’s the five-year challenge.”

He further argues that there is work to be done across the entire industry in making information uniform and in ease of travel to attract more users. The question is something of an imponderable. “How do you make the whole experience easier and more accessible, when you always want to start with the non bus user?

routeone Team - June 24, 2022
Across is recruiting for a PCV Jumbulance Driver to join its team at their Head office – Stansted Airport Business Park. They are looking for...